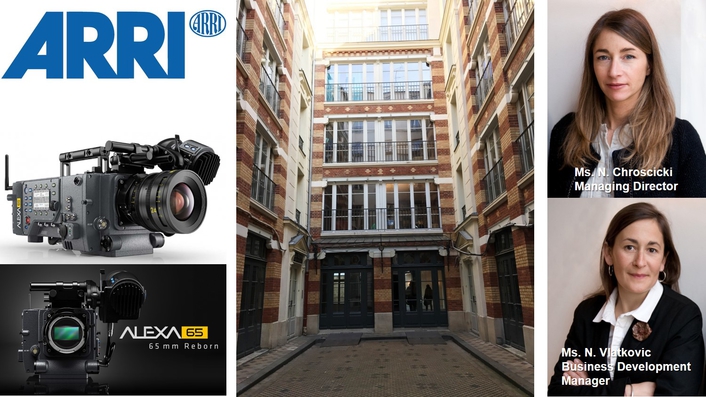 New subsidiary dedicated to Camera Systems and Lighting, Business Units • Boutique offices complete with showroom in the center of Paris

In order to facilitate its business in France, ARRI, the Munich-based film technology company, is announcing the founding of ARRI CT France (CT for Cine Technik). For the first time, ARRI will have an office space solely dedicated to its Camera Systems and Lighting Business Units in France while being able to offer a special promotional platform for the ALEXA 65 available from ARRI Rental. This increased presence not only strengthens the ARRI brand but also encourages synergies and cross sales between the company’s various Business Units. “Considering that the French film industry is one of the strongest and most prestigious in the world, we are very pleased about expanding our capabilities in this important film market,” comments Dr. Jörg Pohlman, Executive Board Member of the ARRI AG.

For many years, the marketing and business development for the ARRI brand in France was represented by Imageworks, under the direction of Natasza Chroscicki with the long-standing collaboration of Natacha Vlatkovic. However, the growing business necessitated an expansion. The new subsidiary branch of ARRI will continue to be overseen by Ms. Chroscicki (Managing Director) and supported by Ms. Vlatkovic (Business Development Manager) thereby retaining the local expertise ARRI customers in France have grown accustomed to. “ARRI’s strategy has always been to maintain a close relationship to customers and end users,” explains Ms. Chroscicki.

ARRI CT France will be moving into a spacious new office in central Paris near the Place de la République. The space will feature a boutique style showroom displaying the various products Camera Systems and Lighting have to offer while highlighting the ALEXA 65, available through ARRI Rental. “Having a dedicated space to organize demos and trainings has become a necessity” remarks Ms. Chroscicki. She continues: “The idea is to create a space for networking, exchanging, and listening to customers whether they be direct buyers or industry influencers.” ARRI CT France will also have a “High Dynamic Range (HDR) Room” with a UHD HDR TV where visitors can view footage and test workflows.

Along with the new facility, new services will be added to the ARRI portfolio in France. Due to the growth of its Lighting Business Unit, ARRI has recruited Christian Léonard to support and develop the company’s EMEA activities in the broadcast and theatrical lighting market with a special focus on France. With the potential of ARRI’s ALEXA 65 for the feature film and commercial market in France rising exponentially, ARRI Rental is thankful to have a demo space and a local team of experienced colleagues.

Arnold & Richter Cine Technik (ARRI) is a global company within the motion picture media industry, employing around 1,300 staff worldwide. In 2017 ARRI is celebrating its centenary, having been founded in 1917 in Munich, Germany, where the headquarters is still located today. Other subsidiaries exist in Europe, North and South America, Asia and Australia.

The ARRI Group consists of five business units: Camera Systems, Lighting, Media, Rental and Medical. ARRI is a leading designer and manufacturer of camera and lighting systems for the film and broadcast industry, with a worldwide distribution and service network. It is also an integrated media service provider in the fields of postproduction and equipment rental, supplying camera, lighting and grip packages to professional productions. ARRI Medical focuses on the use of core imaging technologies for surgical applications.