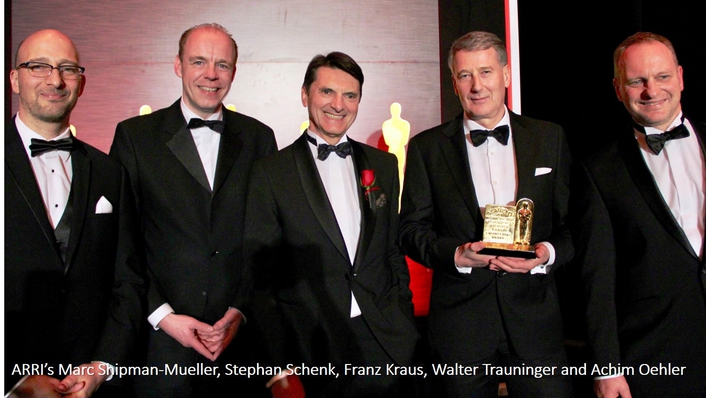 On February 11th in Beverly Hills, Los Angeles (USA), in the Ballroom of the Beverly Wilshire Hotel, the 89th annual Scientific and Technical Awards presentation of the Academy of Motion Picture Arts and Sciences (AMPAS) took place. With their so-called Technical Oscars®, the organization recognizes outstanding achievements within the motion picture industry.

This year’s prizewinners list includes the German company ARRI. The manufacturer of technology for the film industry was honored with a Scientific and Engineering Award for the forward-looking concept and innovative technology of its Super 35 format ALEXA digital camera system. This prestigious accolade is the 19th Scientific and Technical Award presented to ARRI over the course of its 100-year history.

ALEXA was introduced to the market in 2010, quickly becoming the most trusted and widely used digital camera system for professional film and television production worldwide. With highly upgradeable system architecture, ALEXA has evolved through software updates and hardware upgrades to keep pace with the industry's rapidly changing needs. For the last five years, every film to win the Academy Award® for “Best Cinematography” has been captured with ALEXA.

“With an intuitive design and appealing image reproduction, achieved through close collaboration with filmmakers, ARRI's ALEXA cameras were among the first digital cameras widely adopted by cinematographers,” states the AMPAS.

Members of the project team traveled to Los Angeles to participate in the celebration and to collect the award, which takes the form of an Academy Plaque. Among them was Franz Kraus, the ARRI AG Executive Board member responsible for technology. “We thank the Academy for this major honor on our 100-year anniversary,” says Kraus. “We see this distinction as an incentive to further push our research and development to higher levels. We want to respond to changing customer demands, with future oriented, innovative solutions and develop camera systems and technologies that support film and program makers to realize their creative dreams.”

Stephan Schenk, Managing Director – alongside Walter Trauninger – of ARRI Cine Technik GmbH & Co. Betriebs KG and responsible for the Business Unit Camera Systems, says: “We are thankful for all the feedback that we received from cinematographers and other members of the film industry globally. This helped us tremendously with constantly improving the ALEXA range over the last seven years. We are very pleased that, besides the technological aspects, the close cooperation and the resulting high market penetration have been honored by the Academy.”

Ray Feeney, chair of the Scientific and Technical Awards Committee, comments: “This year we are particularly pleased to be able to honor not only a wide range of new technologies, but also the pioneering digital cinema cameras that helped facilitate the widespread conversion to electronic image capture for motion picture production. With their outstanding, innovative work, these technologists, engineers and inventors have significantly expanded filmmakers' creative choices for moving image storytelling.”

Unlike the Academy Awards®, which are due to be telecast on 26 February, the achievements receiving Scientific and Technical Awards have no need to be developed and introduced during the course of 2016. Rather, they must demonstrate a proven record of contributing significant value to the whole film industry.

About ARRI:
Arnold & Richter Cine Technik (ARRI) is a global company within the motion picture industry, employing around 1,300 staff worldwide. In 2017 ARRI is celebrating its centenary, having been founded in 1917 in Munich, Germany, where the headquarters is still located today. Other subsidiaries exist in Europe, North and South America, Asia and Australia.

The ARRI Group consists of five business units: Camera Systems, Lighting, Media, Rental and Medical. ARRI is a leading designer and manufacturer of camera and lighting systems for the film industry, with a worldwide distribution and service network. It is also an integrated media service provider in the fields of postproduction and equipment rental, supplying camera, lighting and grip packages to professional productions. ARRI Medical focuses on the use of core imaging technologies for surgical applications.