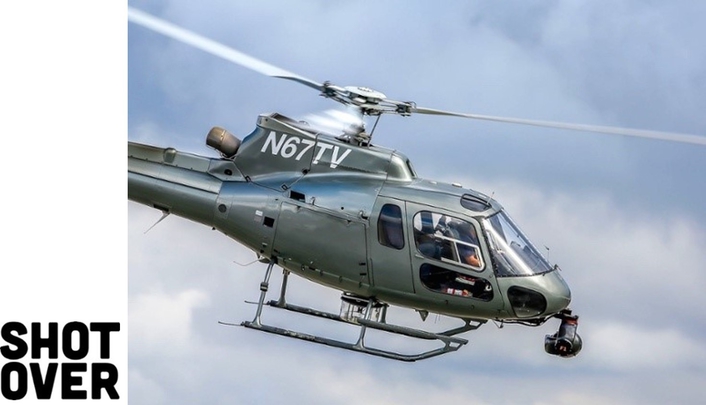 Introduced earlier this year, the SHOTOVER F1 LIVE is the broadcaster-optimized variant of the company’s popular SHOTOVER F1 gyro-stabilized camera platform.  The system supports all major broadcast cameras, including both 4K and 2K models and comes fully configured and set up from the factory with the customer’s camera and lens system of choice.    It also comes equipped with the SHOTOVER Rain Spinner, the industry’s top tool for keeping the lens clear when shooting in wet conditions.  An integrated moving map overlay to help broadcasters quickly identify ground locations and addresses during fast moving assignments is also available as an option.

“We have used every serious offering in the market and the SHOTOVER F1 LIVE stands out for its unparalleled performance, image quality and reliability,” said Lieven Hermans, owner of Air to Air Belgium.  “When you’re broadcasting 4K footage at full zoom from a heavily maneuvering helicopter at full speed, there’s no room for error and the F1 LIVE delivers a level of clarity that is simply amazing.
It’s a completely new standard and for us the preferred system for keeping up with the intense technical demands of live 4K broadcasting.  With the purchase of the SHOTOVER F1, we are fully ready for the 4K future.”

Featuring 6-axis gyro-stabilization with look down capability the F1 LIVE utilizes an open platform design that can accommodate new cameras and lenses as they become available. The system can also be painted to match a broadcaster’s color scheme.  SHOTOVER offers all owners dedicated 24/7, 365-day-a-year service including on-site assistance at their locations or in the field.
“Air to Air Belgium is one of Europe’s premier aerial production companies with incredible expertise shooting the world’s fastest moving sporting events,” said SHOTOVER CEO Brad Hurndell.  “We are excited to have been selected to support their high profile, live broadcast needs.”

About SHOTOVER
SHOTOVER is a developer of high performance camera systems and UAVs for the motion picture and broadcast industries.  The company’s line of gyro-stabilized camera platforms offers aerial cinematographers an unprecedented level of stability, control and versatility in a compact package easily configured for 2D, 3D and Ultra HD shooting with the world’s most advanced cameras and lenses.  Developed in partnership with the motion picture industry’s top aerial cinematographers, SHOTOVER systems are fully user upgradeable, allowing operators to utilize new professional cameras, lenses and accessories as they come to market.

About Air to Air Belgium
Air to Air bvba was created in 2008 by Lieven Hermans and provides aerial camera and downlink systems and services to clients around the world. Air to Air is one of the first companies in Europe to offer the complete package of a 4K camera with a long lens and 4K video downlink to clients.