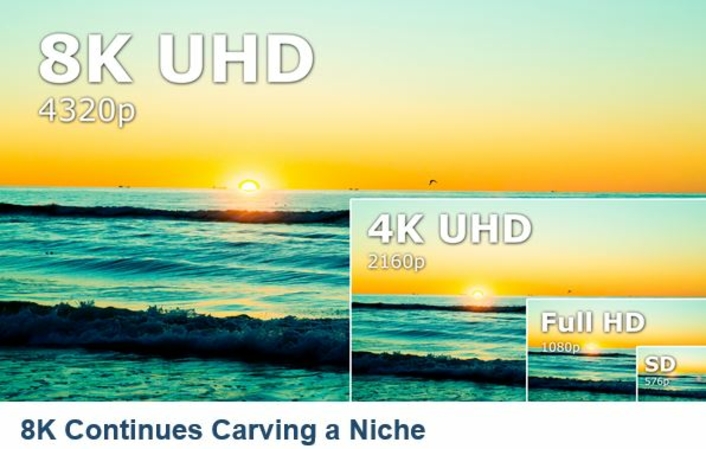 At one point not so long ago, certain elements of the broadcast industry were hoping that “2020 would be the big year for 8K, because of [Japanese broadcaster NHK’s] plan to broadcast the Summer Olympics in 8K,” recalls Chris Chinnock, president of Insight Media and executive director of the 8K Association. “That was going to be the premier event, all kinds of new equipment was going to be announced, and there was going to be some hype and pomp and circumstance around 8K, certainly in Japan. Now, all that is postponed at least a year, so we will have to wait and see what happens.”

Chinnock, of course, is referring to the rapid hit that nailed the entire industry—indeed, the entire world—due to the ongoing COVID-19 pandemic. That crisis, among other things, pushed back the 2020 Summer Olympic Games to next year, and also had numerous repercussions across the broadcast industry, such as the cancellation or postponement of most production, live events, trade shows such as NAB and IBC, and numerous other in-person industry activities. In the case of the development, implementation, and practicality of weaving 8K-capable broadcast content, equipment, and workflows into the equation, however, Chinnock remains optimistic that the 8K broadcast push will keep moving forward.

“Although [the pandemic] took a lot of wind out of the balloon, in talking to a number of vendors who were at NAB last year, and folks who were planning to go to IBC this year, I’m being told that many of the [8K-related] products they were planning to release are pretty much going to come out as scheduled,” Chinnock explains. “So, product-wise, there is not that much of a delay. The delay has been more related to production. But that said, whenever you are doing production, 8K capture continues to make sense in many areas. The phenomenon of over-sampling—capturing in 8K and delivering in 4K or 2K or some other lower resolution—offers the same benefits that we got when 4K cameras came out several years ago. There remains a great benefit in terms of capturing at higher resolution, even if delivery will be lower resolution. If you capture at the higher resolution and downscale the whole image, you create a better fidelity image than you would have captured at a native lower resolution. This also allows you to do panning-and-scanning and cropping, meaning you can manipulate the image in more flexible ways.

“On the sports side, we have interesting applications with two, three, or more 8K cameras looking at a whole field of play. They now have software that can pull out one to four crops within that, so a full 8K image can give you four UHD images or four HD images. They can be tracked to an individual player or object, and the windows can move around this 8K canvas and become camera feeds if you do it right. In other words, one 8K camera can potentially do the job of two to four standalone cameras. That is pretty powerful stuff.”

He adds that at this point in time, “we basically have all the equipment we need for live and file-based 8K capture, production, and distribution. NHK has led that for more than 20 years, and now we have other vendors jumping in across the field with a full range of cameras, switchers, converters, and software, and people are doing up-conversion, down-conversion, high dynamic range, standard dynamic range—you name it.”

Chinnock also emphasizes that the current media landscape offers all sorts of opportunities for 8K capture, archiving, and eventual viewing when one considers that, for the foreseeable future, at-home consumer entertainment via broadcast or OTT streaming is pretty much the center of the entertainment universe. Indeed, many of the key aspects of the 8K paradigm were discussed in May of this year in a pair of remote video panels that Chinnock and other industry experts participated in for the NAB Express program on two important 8K topics—one on the issue of creating 8K content and another on delivering 8K content to consumer homes.

One reason he is so optimistic is the fact that high quality content has never been in greater demand by consumers. He points out “we are in the middle of a streaming war, after all,” and therefore “this is a golden age of content creation.” Thus, with seemingly unlimited viewing platforms available, the creation of high-quality imagery that can be down-sampled from the aforementioned, information-filled “8K canvas,” simply makes a lot of sense in his view.

Additionally, he continues, the business mechanics of the television manufacturing industry have placed 8K panels at “the tip of the spear” of the imaging ecosystem, even long before there will be significant volumes of 8K content available to illustrate everything that those televisions can do.

“All the improvements we always talk about arrive nicely in an 8K picture,” he states. “I’m sure most 8K televisions will have higher dynamic range and better color gamut and luminance levels,” he says. “That goes to the point of why would a consumer want to buy an 8K TV today. The answer is that 8K sits on top of the pyramid with all these other things. If you want to buy a new Smart TV, you want the best processing, the best picture, the best audio, the best interface, and so on—that is an 8K TV with higher dynamic range. You get a better 4K or even 2K experience if you have an 8K TV, because you have the best processing available in it. People have to understand the upscaling capabilities of such televisions today. It’s a whole different ballgame than even a few years ago, as now we are entering the era of AI-assisted upscaling capabilities. That means 2K, even standard definition content, can be upscaled to look decent on an 8K display. So the point is, people talk about the fact that 8K content is not really here yet, but you don’t need 8K content to enjoy an 8K TV.

“If you study data, large television production basically works on a seven-year cycle,” he adds. “The transition from SD to full HD was about seven years, and from full HD to UHD was about seven years—with seven years defined as from production introduction to when that resolution reaches at least 50 percent of sales in the market. We are definitely there now for 4K, and I expect that 8K will follow the same pattern.” Of course, this picture-viewing ecosystem requires content data to be transmitted to and received and processed by consumer equipment. Chinnock emphasizes that he expects the current ongoing revolution in the world of compression and encoding to be a great boon for 8K broadcasting.

“VVC [H.266], the successor to HEVC [H.265], was recently finalized, and that will be very helpful,” he says. “And EVC [MPEG-5], Part 1 is now close to being released, and there are others. These can be applied to 8K and have modest or no royalties attached—an issue we had with HEVC, which kind of slowed its adoption. Then, there is the LCEVC [low-complexity EVC] codec, which is sort of like a pre-processing stage that can be used in combination with any other codec. And you have AV1, which is now starting to roll out with 8K content on YouTube. So really, all these new codecs have advantages for 8K, because they reduce the bandwidth or the file size.

“And then, the other piece is what I’m calling AI-assisted encoding or smart encoding. The idea is you could start with an 8K master file and then downres to 4K, but in a smart manner to capture the way you downres through metadata or some other information that becomes part of the encoding process. All of that is delivered as a 4K package with 4K encoding over the pipe. When this gets to your Smart 8K TV, it will be able to use that metadata to smartly upscale the content back up to 8K. In other words, the downscale/upscale path can now have image quality that is very close to a native 8K path, except you are doing it inside a 4K pipe.”