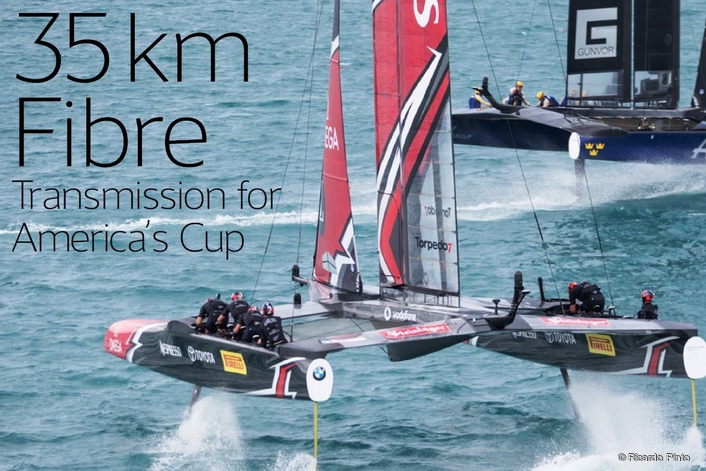 The America’s Cup sailing race is the oldest trophy in international sport, dating back to 1851. And for the 35th edition, presented by Louis Vuitton, the location was Bermuda, as the event moved to the iconic Great Sound.

Local Bermuda Broadcasting Company (BBC) were appointed as the official broadcast partner, and they responded by creating an advanced fibre network between the America’s Cup Village at the Royal Naval Dockyard, the transmission, editing and news gathering hub, and their own studio back at base. They did this via a BroaMan advanced fiber network ­– this has not only enabled them to provide viewers and listeners with live coverage of all the racing over the five weeks via terrestrial TV and radio broadcasts over IP but also to feed its web and social media platforms. This has included taking video and commentaries out on the water, from helicopters overhead and on shore.

BBC constructed this by deploying a powerful pair of BroaMan Mux22 interfaces which connect the 35km distance between the two locations via a single duplex fibre. These hardware enablers allow them to provide connectivity of six video signals (4 HD-SDI In / 2-Out), 4 Line In / 4 Line Out, 4 GPIO (with IC444 board) plus a 100Mbit LAN switch, RS485 and 1Gb Ethernet.

Patrick Singleton, CEO of Bermuda Broadcasting, admits his company’s appointment by the America’s Cup organisers had forced a substantial upgrade at the station, including new TV and radio transmitters, high-speed fibre-optic systems and a fully digital workflow. “The America’s Cup is the greatest sporting event in Bermuda’s history, and we are pleased to have been able to present this in beautiful, high definition.” 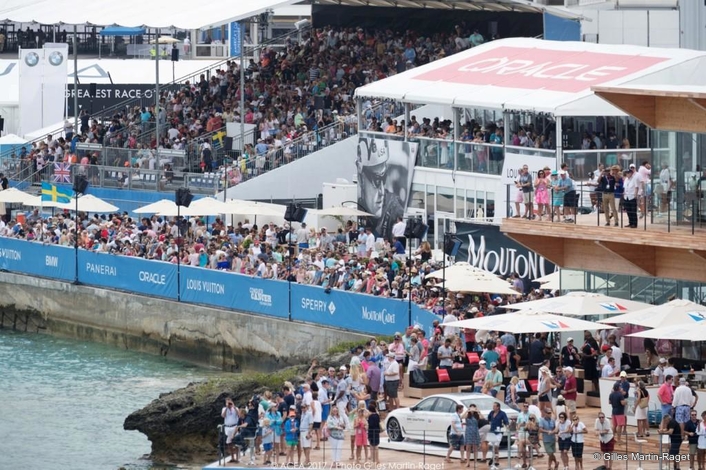 Spectators at the Americas

But this looked unlikely when last year a lightning strike damaged their playout and destroyed sensitive MCR automation equipment ahead of the Summer Olympics. Having competed in three Olympic Games himself, and now on the International Olympic Committee’s Athletes’ Commission, he was quick to act. “We handle a lot of live sports and so we developed a mobile application to show this important sporting event, but that didn’t solve the problem of terrestrial broadcasting,” he explained.

It showed just how far BBC had come since setting up 70 years ago, initially broadcasting AM radio before branching out into FM and terrestrial TV. 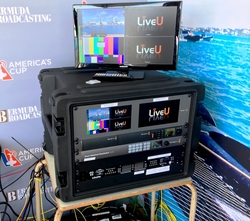 When seeking the optimum solution for the America’s Cup coverage Singleton became aware of the BroaMan platform, and its vast potential, after reading an interview with their MD, Tine Helmle on SVG Group’s online resource. In it she discussed fibre solutions for professional broadcast. “Especially interesting for us was the fact that BroaMan had supplied a solution for the World Rowing Championships and I could see they were especially good at delivering sporting events. I wanted to create a remote broadcast facility at one end of our country and operate from a master control back at base … and BroaMan seemed like the perfect solution,” he stated.

He then spoke to Helmle at length, researched the brand and met BroaMan representatives at the NAB Show.

It had been the innovative app they had created after the lightning strike that had first aroused the interest of the American Cup organisers, and they had initially asked BBC to assist with their own app.

“This was the catalyst,” remembers Patrick Singleton, “but instead of building a mobile app we were then asked if we would handle their entire terrestrial broadcast feed so that the entire country could watch or listen to the races live on TV or Radio ­–Including all the spectators watching and listening live from boats on the side of the race course.”

In fact BBC had been looking at a level of implementation beneath BroaMan’s Mux22, which combines different formats of video and data in a single fibre cable. They felt BroaMan’s Repeat48 would have sufficed. “But then the organisers told us it was no longer just TV they required, but radio as well, and they wanted a physical presence in the America’s Cup Village, with DJs and live news,” Singleton remembers. “And so the requirement changed. We needed to move to Mux22 as we were taking a large number of feeds direct from the America’s Cup OB’s routed through the BroaMan platform.”

In fact the amount of data and number of UHF channels being transmitted was remarkable, with the HD-SDI signal entering the BroaMan domain and coming out over fibre to BBC’s main studios. “We have a 12km line of site but there is a fall over redundant fiber ring that runs 35km that we had to plan for,” Singleton continued. “Once the signals arrived at our station we play them out over our TV and FM transmitters.”

They also send the signals to local cable companies and their live produced TV race feed is also sent 14,000km by fibre to Asia where it’s recorded and stored. “Additionally the event organizers asked us if we could pass through our equipment a special broadcast feed that they were producing to one of the cable companies for delivery to Super Yachts. This was made possible due to the flexibility of the BroaMan Mux22.” 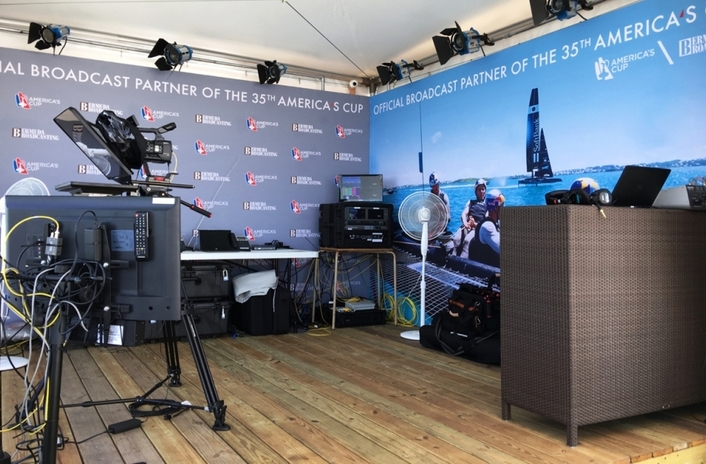 TV Studio at the Americas Cup

He emphasized the value of BroaMan with the following anecdote: “In one instance we were doing some editing at the event village and had a 3Gb file and we thought it would take an age to send it back to base but it went in seconds. With BroaMan, large files can be sent very quickly and it went straight into our network storage.

“We were confident in the BroaMan technology and it has proved to be rock solid — it was German engineered so it had to be good.”

The ‘rock solid’ fibre network was co-designed with UK-based consultant engineer Mark Johnson from TTFN TV, with the aid of their new transmitters. An earlier concept of a wireless and microwave technology solution was dismissed due to interference and the threat of large ship masts cutting the point to point link.

It had been Johnson’s idea to use an Ethernet Audio over IP network, using the 100 Mbit LAN and 1Gb switcher for file transfer and remote control. “The Telos Axia LiveWire provided the AoIP sub-network, linking video to the NewTek IP Series Video Mix Engine,” he explained.

Further expansion of BBC’s remote mobile facility included the acquisition of a LiveU LU500 video field unit for OB transmission, while the purchase of IP switchers has been a further benefit in the broadcasters’ systematic upgrade.

Reflecting on other challenges, Patrick Singleton continued, “The SFP transceiver modules also had to be right, which was difficult. In fact the organisers tasked us with a lot more than we had initially expected.” This included IP cameras for security and monitoring the America's Cup pit lane. 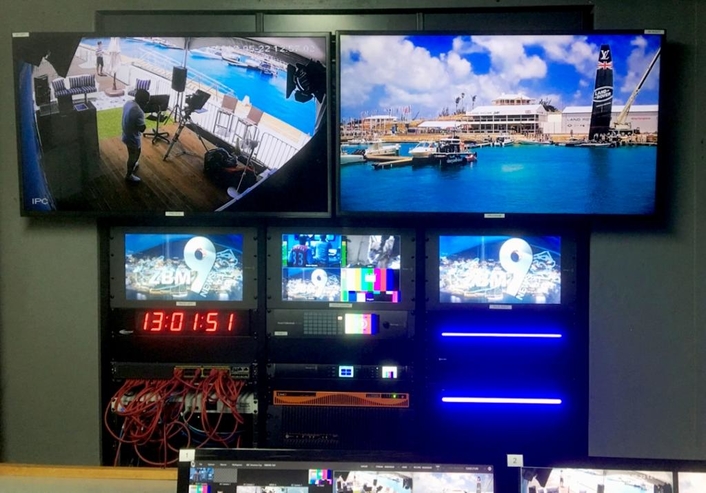 “It’s been fantastic operating all this through the BroaMan gear,” he said.

Meanwhile, feeds to guest broadcasters from around the world, including NBC, BT Sport, Sky Sports, Canal+, Mediaset, RTVE, Eurovision were provided by the America’s Cup authorities themselves.

This exercise has marked a major technological step change for Bermuda Broadcasting Company. “Five weeks is a long deployment and the BroaMan portable rack has been faultless — particularly considering we are operating in a tent that wasn’t air conditioned rather than a dedicated post production facility. In fact we have been so impressed with it that we now feel the need to continue with it.” But at the same time he emphasizes the necessity to access dedicated dark fibre in order to provide coverage, for instance, at dedicated cricket or football venues. 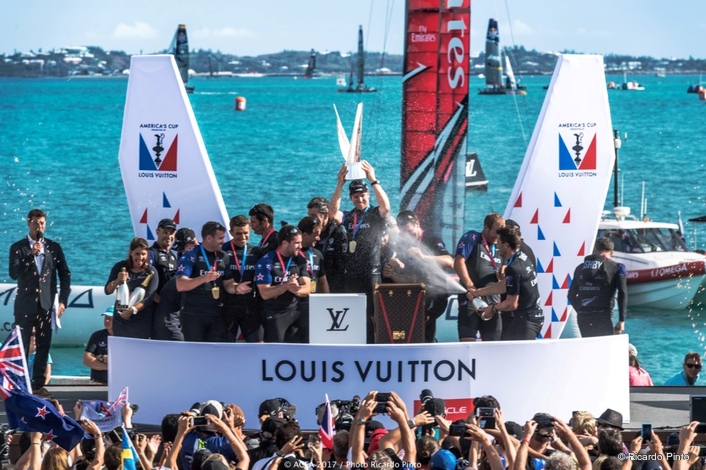 “We have been able to broadcast practically frame accurate, and our people are in awe of it. We’ve really shown how a legacy media company can up its game.”

As for Mark Johnson, he was also unequivocal about the role played by BroaMan in the success of this year’s America’s Cup. “Their fibre solution has just fixed so many problems, it was like the genie out the bottle,” he said. “As hardware enabling components, BroaMan provided the equipment in one neat box at each end — enabling us to do everything we wanted whereas previously it would have required half a dozen. It was such a neat solution.”