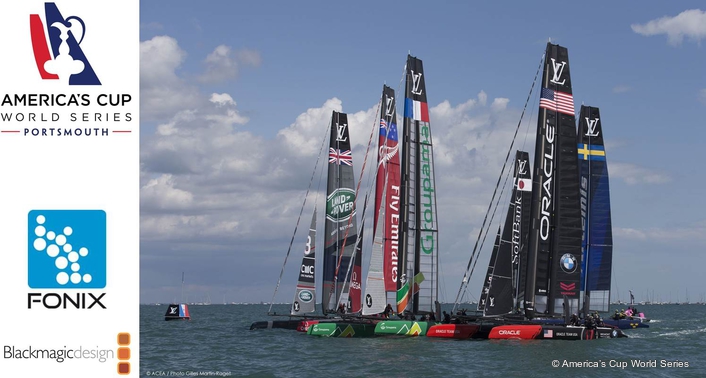 Drafted in by organizers of the America’s Cup World Series, Fonix LED was tasked with delivering all of the audiovisual infrastructure at the opening regatta of the 2017 cycle, which for the first time in its history, took on the Solent hub of Portsmouth, England.

“Our brief was vast,” explains Colin Parnell of Fonix LED. "Multiple feeds, multiple locations, full camera coverage of the event, at sea and on the festival site, password protected live streaming and screens positioned around Portsmouth as well as in the fan zone, waterfront arena and VIP areas. We also needed to support the broadcasters and take live feeds from them."

The fan zone was a dedicated space for paying spectators while the waterfront arena was a full sized festival stage, open to the general public. Spectators in the fan zone were given an excellent view of the water, plus a giant LED screen and local stage with exclusive content. Fonix’s local production team covered the zone using several long lens positions, and a further two microwave linked roving cameras.

Public Areas
For the wider public, organizers also hosted a waterfront arena with a festival stage, flanked on either side by two big LED screens. This was the setting for a number of big concerts during the regatta, including performances by McBusted, Wet Wet Wet and Spandau Ballet, all of which were covered by Fonix’s production crews.

It proved to be a very complex setup, particularly in regards to audio, with challenges in embedding and de-embedding audio, as Fonix had to feed a large number of analogue systems throughout the four day regatta. Due to the terrain, which in parts was inaccessible, the workflow was based on a mix of optical fiber, for distances from 70m up to 600m, and SDI, as well as microwave radio links, all of which were patched to a Smart Videohub 20 x 20 router from Blackmagic.

“We were taking auxiliary feeds from a pair of ATEM 2 M/E Production Studio 4K’s, in use at each of our two local production hubs, the waterfront arena and fan zone, as well as an ATEM Television Studio to give us additional HDMI inputs. We relied on a whole series of Blackmagic’s Mini Converters to embed and de-embed audio. The ATEMs audio capabilities were also pushed to the limits with every input including embedded audio, and the ATEM 2 main audio outputs being fed to a separate desk, the audio monitor output to another one. It meant the ATEM was effectively de-embedding more than 12 channels of audio.

The graphics requirements, including lower thirds and data screens for the captains, was detailed and required fast operation. Fonix opted for Livestream Studio software running on a PC equipped with a DeckLink I/O capture board, giving the production team an SDI feed for the vision mixer.

“This was extremely effective and gave us animated back drops, which we played from ATEM’s internal media player. The ability to play VTs behind graphics affords tremendous flexibility, and the spreadsheet style implementation is quick and easy, particularly when updating lower thirds and captions. Blackmagic’s DeckLink board provides a perfect signal for keying too.”

Extensive Coverage
During the four days, event television played a big part. America’s Cup TV (ACTV) was live on air to spectators from 10am Thursday morning, and then each day until 7pm, uninterrupted. Race feeds were only available for several hours each day, across the Saturday and Sunday. 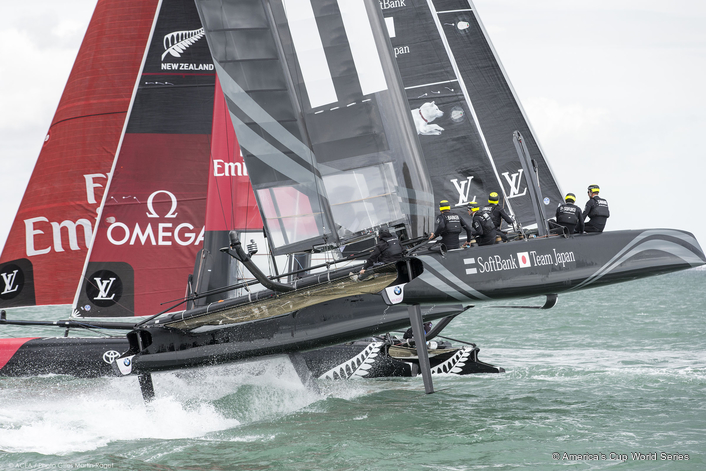 “Whilst the programming schedule included live race feeds, VTs and advertising, that still left a big hole in ACTV’s scheduling that need filling. We had teams on the ground providing live camera feeds, which we incorporated into the program schedule, including coverage of stage presentations and interviews, or the huge amount of activity on the water, including other craft types, parades and windsurfing as well as all the supporting race competitions.”

“Our XJ95 and HJ40 long lenses allowed us to acquire excellent shots of all the craft on the water, and provided great close ups of the America’s Cup contenders when they came out for practice. We used a wireless tally system, which we connected to Blackmagic’s vision mixers using their GPI and Tally Interface. This setup gave our camera operators wireless tally, including preview and TX.”

“The fan zone and waterfront stage each had its own production team responsible for producing local content, all of whom worked tirelessly throughout that period to keep it entertaining and factual, whilst also providing up to the minute information to spectators and fans.” 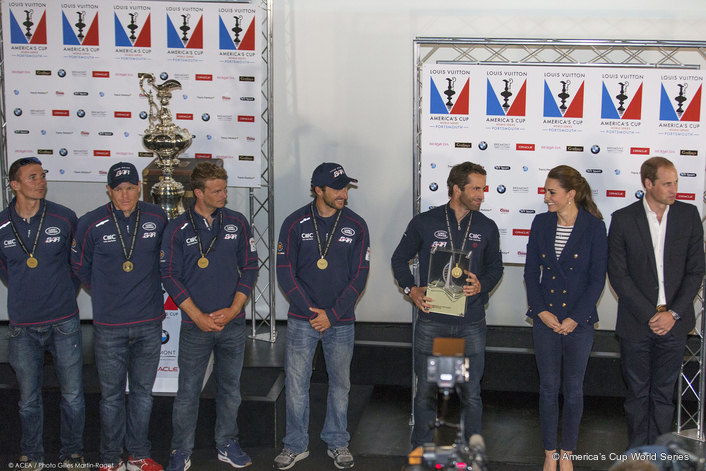 Prizegiving presented by Duke an Duchess of Cambridge

Fonix also supplied those feeds to Southsea Castle, the VIP areas, a number of the competing teams’ own exclusive areas and a very busy media center - where Fonix had fitted a 3mm high resolution indoor screen.

“We had five separate laptops set up at each of the two local production hubs, providing us with feeds for VT playback, including feature videos, ad rolls, and animated graphics. We used two HyperDeck Studio Pro broadcast decks to record the program output, both the primary and backup. We also had a HyperDeck Shuttle connected to a roving camera to gain “as live” content, which we then played back from a third Blackmagic broadcast deck as a source player.”