The Isle of Wight Festival 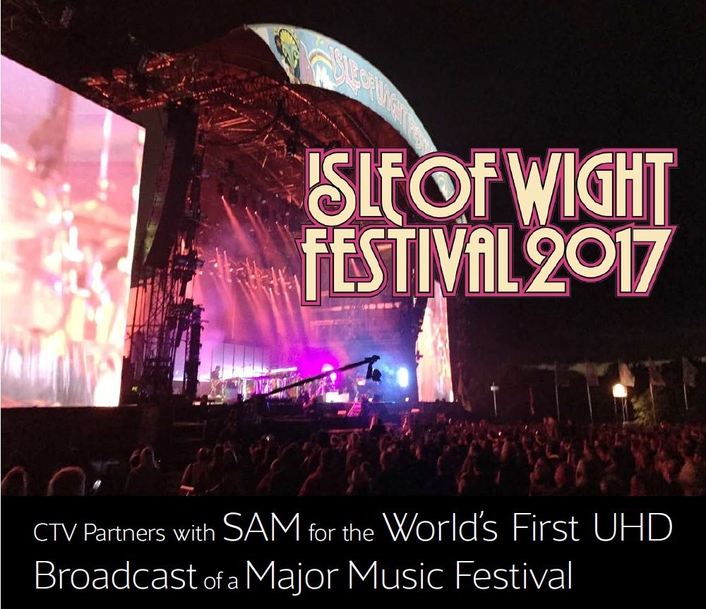 The Isle of Wight (IOW) Festival is the first major event that sets the UK Music festival season into motion. In its early years, it played host to such leading lights as Bob Dylan, Jimi Hendrix, The Doors, Leonard Cohen and Joni Mitchell. Since the festival’s revival in 2002, it has stayed true to its heritage of drawing some of the biggest acts in the music business. Headliners have included everyone from The Who, Robert Plant and the Rolling Stones to Paul Weller, Stereophonics and Pearl Jam.

Moving to a UHD Production Workflow

With a line-up of headline acts such as Rod Stewart, Run DMC, Arcade Fire and David Guetta, this year’s event upped the ante as it became the first major music festival to be broadcast in both UHD and HD with 5.1 audio. Across the four days of the festival, four hours of UHD content every night was on offer to satellite service subscribers. For those viewers without an HD subscription, content was offered via the regular SD channel and also available for access via the broadcaster’s VOD service. This move to UHD was not without its challenges – it was decided that coverage of the event would be transmitted 2160/50p, which had implications for everything from the production workflow to storage. 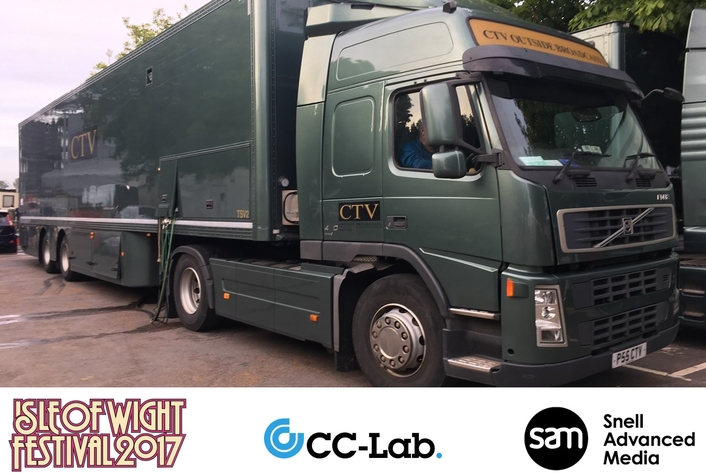 Back in January 2017, UK-based OB company, CTV, which has worked on the IOW Festival many times in the past, provided a quote to CC Lab for the supply of HD facilities. When CC Lab decided to change the program format to UHD, a general tender was issued for the provision of UHD OB facilities, for which CTV again put forward a bid. As Hamish Greig, CTV technical director explains, “After a very challenging and competitive bid process I’m glad to say that CTV was awarded the project at the end of March.”

According to Greig, the main challenge associated with the switch to UHD was twofold: first, the CTV team had to put together the workflow required to record two stages, while delivering live UHD and HD coverage. Second, they had to find a way of dealing with the sheer amount of storage needed to handle all the UHD feeds.

After considering the options, CTV decided on a new replay and highlights workflow, built around SAM’s LiveTouch ultra-fast live replay and highlights system to support this first ever UHD production of the IOW Festival. The system replaced the legacy EVS workflow that had been used in previous years. The flexible and intuitive nature of the LiveTouch system meant that it was quick for operators to learn, and also provided a fast and easy way to drop signals in and out. As Greig explains, SAM’s LiveTouch was selected for its ability to deliver a fast turnaround workflow and for the networking capability that it offers. “First, [The LiveTouch] systems joined together and networked really easily and secondly, the Rio editing capability was advantageous. The native XAVC support offered by the LiveTouch and way that it interfaces with the Rio editor meant it was very fast to drop in shots almost live,” he adds.

While most replays in sports – where LiveTouch has made its mark – are done at 1080/50i, the way the festival coverage was kept in 2160/50p was unusual. According to Greig, this was seen as the more sensible option as content from multiple stages was edited and delivered in quick-turnaround packages as opposed to the more common instant replays used in a live sports context. Although 2160/50p can be awkward to edit with, as Greig explains this is offset by the fact that the storage requirements are significantly reduced. This is thanks to SAM’s FrameMagic media management technology which means no duplication is required when trading projects between replay and edit.

Led by CTV’s onsite Technical Producer Bill Morris, CTV dispatched OB2, one of its fleet of new 4K/UHD trucks, and its MTV5 unit. The trucks arrived on the Tuesday before the event kicked off, allowing the technical rig set-up to begin on Wednesday, ready for a rehearsal and transmission test on Thursday evening before going live on Friday. OB2 was used to handle audio, vision engineering as well as the two main production areas covering Presentation and Stage 1, respectively. The truck is kitted out with SAM’s Kahuna 9600 production switcher featuring its unique FormatFusion technology, external high-quality SAM UHD up and down converters and Axon UHD embedders and de-embedders to enable simultaneous UHD, 1080p and 1080i input and output paths. Sony BVM X300 32” 4K HDR monitors featured in the main production and vision areas, with 3G monitoring in all other areas. The TSV2 unit supported the Big Top (Stage 2) coverage. 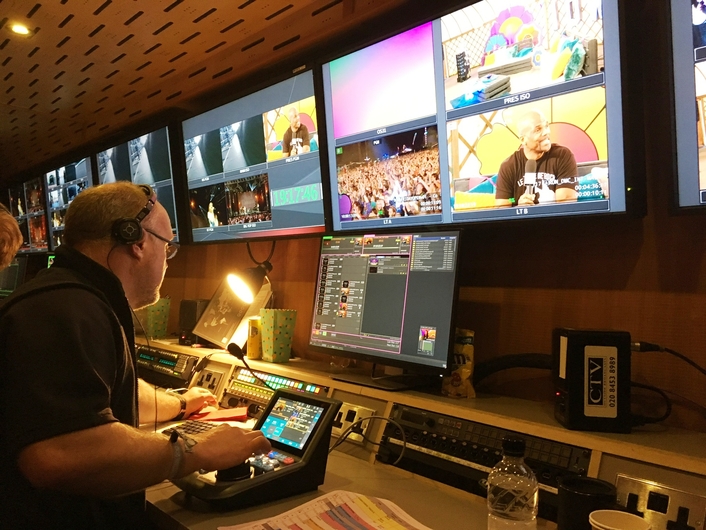 The MVT5 unit was used for the live replay and archive operation and this is where SAM’s LiveTouch replay and highlights system really came to the fore, sitting at the heart of the operation. UHD feeds were delivered from Sony HDC4300 cameras featuring Canon UHD lenses to MTV5. Three LiveTouch servers were used – two to record the live feeds from the two main music stages, and one to handle live replays,  interviews, voxboxes and daily highlights. The three LiveTouch servers provided 120 hours of UHD storage each day with the system’s ‘Always in Record’ technology. At the end of each day, playlists and clips were archived via Fileflow directly to Editshare storage. Greig explains that on each of the four festival days, the Presentation program mix, Main Stage mix and the Big Top mix were covered by multiple cameras. Directorial program cuts for each mix was carried out – in UHD – using the remote panels of a 6M/E SAM Kahuna production switcher. The main panel of the switcher simultaneously produced the combined live program output sent to the broadcaster. 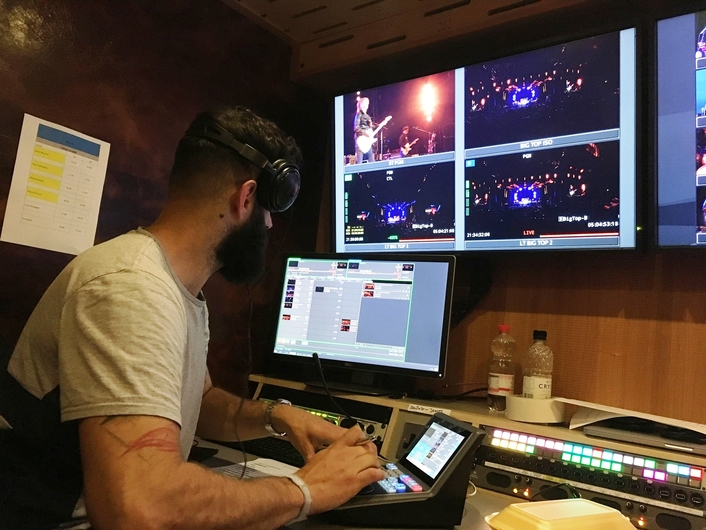 Content from the stages was recorded on three LiveTouch servers and used by three independent replay operators to compile the excerpts of the early acts for playout during the evening’s live broadcast. The operators were responsible for clipping acts and creating highlight playlists for end-of-day programming. All UHD content was streamed between the three LiveTouch systems in a 2in/2out set-up. Graphics, bumpers and stings were created in Adobe Premiere and imported via SAM’s Fileflow transcode and delivery workflow engine using XAVCi Class 300 codec wrapped in an MXF container throughout the day. Each LiveTouch replay workstation also offered a complete craft editor (based on Rio) with a powerful creative toolset unique to LiveTouch, this for Greig was one of the pivotal aspects of the LiveTouch workflow.  LiveTouch is seamlessly integrated with its own Rio editor so any shots or audio can be instantaneously corrected within the playout server, avoiding the time consuming back and forth with the onsite Adobe craft edit station,” he adds. Also forming part of the workflow was a separate archive system that recorded the stage cuts and isolated cameras. This was made available to the onsite edit personnel for backup and proxy production via a 10GbE network. 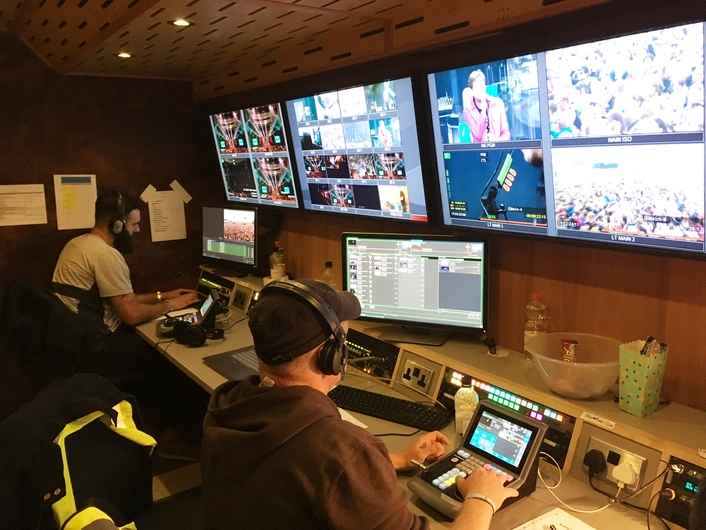 On the audio side, both a 5.1 mix and a downmix (LoRo) generated from each stage were sent to OB2’s Calrec Apollo mixer for QC and routing. MADI from the Calrec, alongside the audio track from the music stages, was fed into a SAM Sirius 840 router. Embedding output cards were then used to record the eight tracks of audio in the first quadrant of the UHD Quad signal (i.e., 5.1 plus downmix). Greig explains that “having one frame from the downmix made things easier.” The 5.1 output from the Calrec was Dolby E encoded and inserted into AES2 of the Axon UHD embedded (1st Quadrant) signal. The downmix from the music stages was embedded on AES1. The same audio allocation was embedded into the 1080i/50 HD feed which was directly uplinked to satellite from the site.

An enjoyable and immersive UHD experience

After four days of live music, interviews, voxboxes and highlights packages, the workflow had to cope with around 180 hours of recorded content, using XAVC Class 300. With the rigs dismantled and the trucks making their way back to base or their next assignment, Greig commented: “The ability to record, transmit and edit three productions in UHD and 5.1 simultaneously is a big task but the workflow stood up to the pressures, delivering an enjoyable and immersive UHD experience.” Commenting on the use of SAM’s LiveTouch as part of the new UHD production set-up, he added, “It exceeded all expectations and was the perfect tool for the workflow this operation required.”

HEROCast – We Will Rock You Isle Of Wight Festival 2016
Six festivals, 800 acts and 400 hours of live music
First Ever 3D Music Festival Counts on the Skquattro for Support