First Ever 3D Music Festival Counts on the Skquattro for Support 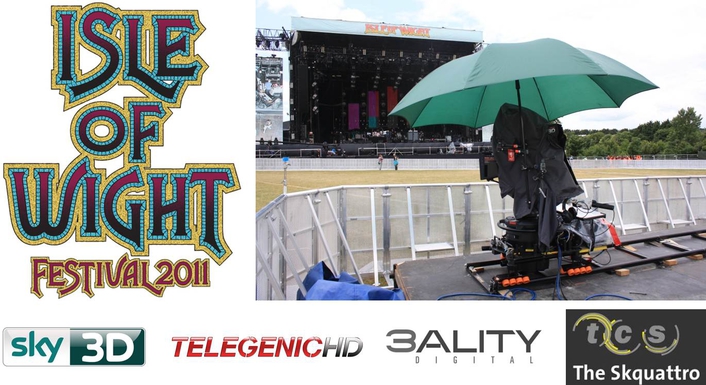 The coverage of the Isle of Wight festival was shot by outside broadcast company Telegenic on behalf of Sky 3D
The Isle of Wight festival was the first UK music festival to be broadcast live in 3D. The three day event took place on 10-12 June with headline performances from Kings of Leon, Foo Fighters and Kasabian. Critical to getting great 3D pictures was a new concept in tracking pedestals, the Skquattro.

The Skquattro was initially developed by rental specialist The Camera Store (TCS), Vinten’s sister company within the Vitec Group. The original requirement came from the Royal National Theatre, which called for the flexibility of a Vinten Quattro pedestal with the ability to move smoothly across the floor of the theatre. TCS took the elevator section of the Quattro pedestal and mounted it in a specially-built tracking skid which allowed the bottom of the column to sit between the tracks. The result was a pedestal retaining the unique one metre height elevation of the Quattro, which could move smoothly along tracks.

The coverage of the Isle of Wight festival was shot by outside broadcast company Telegenic on behalf of Sky 3D. Telegenic’s Eamonn Curtin takes up the story: “A 3D mirror rig is much heavier than a conventional 2D camera so we needed to find a way to take the weight. But it also had to be familiar to the operator who was used to tracking shots with a pedestal.

“The Skquattro is quick to put together and easy and familiar to use,” Curtin added. “It gave the director the shot, and was much more cost-effective than using film-style grips.”

For the Isle of Wight festival the Telegenic coverage used five Skquattro pedestals. Two were on a 30m track immediately in front of the main stage, with a third on a platform 35m back into the audience, on a 10m track. For the second stage there were two cameras on Skquattro pedestals, on a 15m track.

Tim Highmoor, general manager of TCS explained: “Most multi-camera operators are familiar with the Quattro column so having the option to use the Skquattro on track gives them another mounting that they instinctively feel happy with. Working alongside grips, moving a large payload pedestal on track, gives camera operators a new tool in the locker to call on for OB’s and studio shows.”

The Skquattro has already been booked for its next 3D job - the upcoming Harry Potter film premiere in Trafalgar Square. Other bookings include the brand new ITV game show, Jeremy Kyle’s High Stakes; Channel 4’s Style the Nation; and the National Theatre Live’s production of The Cherry Orchard.