The World will always remember: 5.1 Surround Sound for the 50th Montreux Jazz Festival

For the fiftieth time, the Montreux Jazz Festival invited the international Jazz scene to the little town on Lake Geneva. This jubilee, which took place from July 1-16, was celebrated with a fully packed programme including major talents from today and yesterday. The programme reads even more like the who’s who of Jazz and related genres than ever before.

It would have been a pity if these concerts could be enjoyed exclusively by the visitors on site. Of course, a selection of each year’s concerts was transmitted either live through live-streaming on the festival’s website (montreuxjazzfestival.com) or as a recording on Swiss broadcast networks, among other TV channels. But that’s not sufficient for these high-class concerts, many of which have written Jazz history in the past. So, in addition to broadcasts, all concerts in the three main venues were also documented from start to finish in picture and sound. Since, they have been recorded in the highest quality at the time and are now inscribed in the UNESCO Memory of the World Register. This unique collection of audio-visual archives contains more than 5000 hours of live music, all fully digitized by the Metamedia Center of Ecole Polytechnique Fédérale de Lausanne (EPFL). 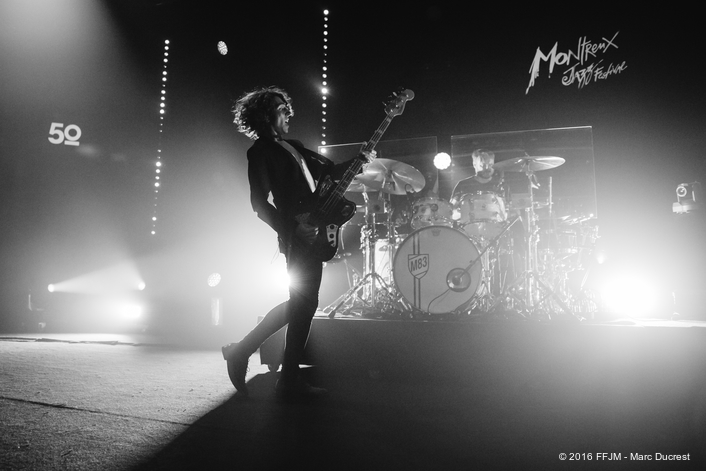 Since 2013, the French speaking Swiss broadcaster “Radio Television Suisse” (RTS) has been once again responsible for these recordings under the executive production and artistic direction of the festival. The broadcaster acts as a strategic service partner of the jazz festival, which specifies the recording technology, allowing the festival to keep archiving its heritage. With three of its own OB trucks and one additional, private owned audio truck, RTS recorded in all three concert halls. 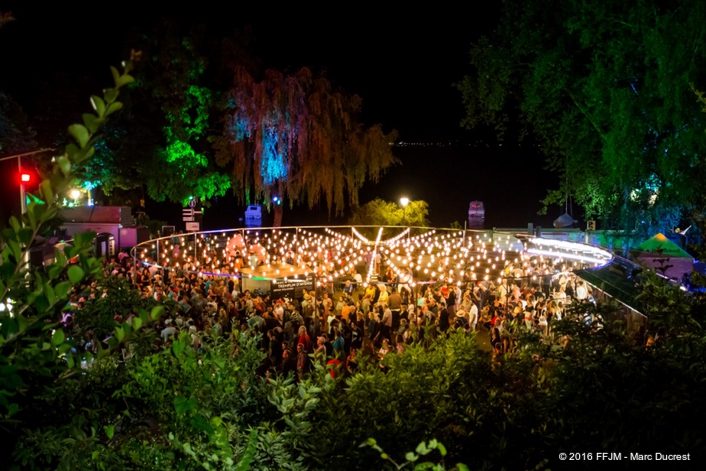 Best quality in video currently means HD, although RTS have already carried out tests in Ultra HD back in 2014. In audio, the state-of-the-art recordings were made at 24 bit resolution with a sample rate of 96 kHz and in 5.1 surround sound. 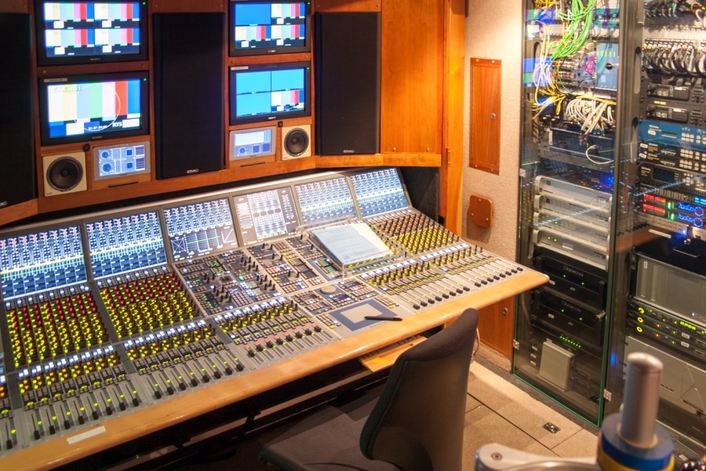 For the Montreux Jazz Lab, the medium sized hall for approximately 2000 people, RTS used its RTS HD1 OB truck, the flagship of its OB fleet. The sound control room, which is based on a Stage Tec AURUS mixing console and NEXUS audio router, is modified every year especially for the Montreux event. The challenge is that one part of the system still has to run at 48 kHz while the rest is switched to 96 kHz. All the audio routing which is done in stereo and 5.1, the audio distribution to the embedders and to all other applications such as the audio monitoring in the video rooms and talk back applications have to be clocked at 48 kHz whereas the live mix and multitrack archive recordings are done at 96 kHz. 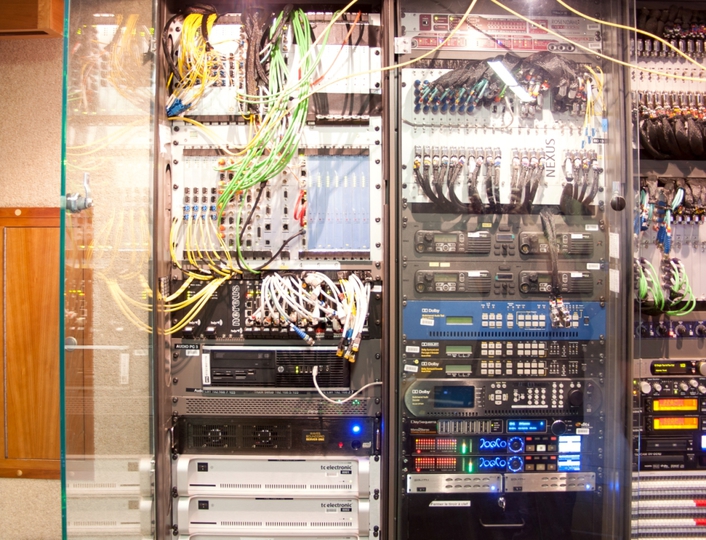 Yannick Dumartineix, manager of the RTS OB Van and Studio Production, relies on a concept which has been tested and proven in recent years: “We hired an additional NEXUS STAR directly from Stage Tec in Berlin. This STAR serves as the audio router for all of the 96 kHz signals and at the same time hosts the DSP boards for the AURUS console.” The NEXUS STAR needed 5 units rack space, space which is always at a premium in OB trucks. Therefore RTS temporarily removed some communication hardware to free up sufficient rack space for the STAR. The OB truck was partially rewired and modified for this production, a unique procedure for this very important recording job! 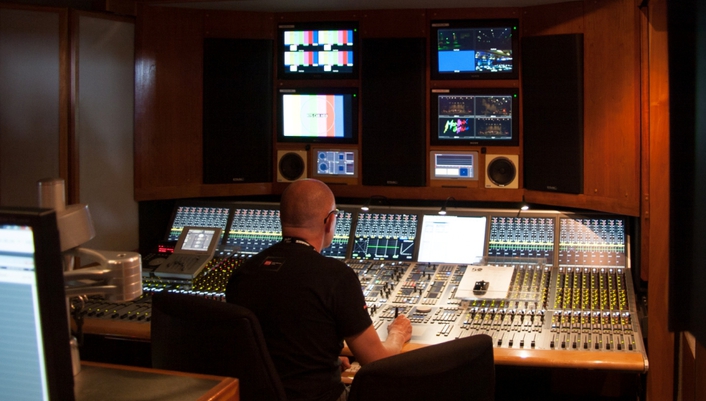 MADI connections with sample rate conversion bridged between the additional 96 kHz STAR and the 48 kHz STAR. The latter was used to record the 5.1 and stereo mixes for the video. These had to be done at 48 kHz since the embedders and some other equipment on the OB truck didn’t support high-resolution audio.

5.1 mixes in 96 kHz are highly resource-intensive. In order to meet the requirements, Stage Tec installed the latest DSP boards within the additional STAR. These DSP Platinum boards handle the AURUS console processing and offer more than twice the number of channels than their predecessors.  Seven of these DSP Platinum boards made possible a console configuration with 160 input channels and 84 buses plus 54 bus channels (214 channels in total). The boards were only introduced in April 2016 at Prolight+Sound, perfect timing because they were essential for this year’s Montreux recordings. “During the development of the DSP Platinum we already had applications such as this RTS production in Montreux in mind”, comments Jens Kuhlmann from Stage Tec, who has supported RTS with the modifications for the Montreux Jazz Festival since 2013.  “And now it was a perfectly adequate premiere that the Montreux Jazz Festival was the very first event to use the new DSP Platinum.” 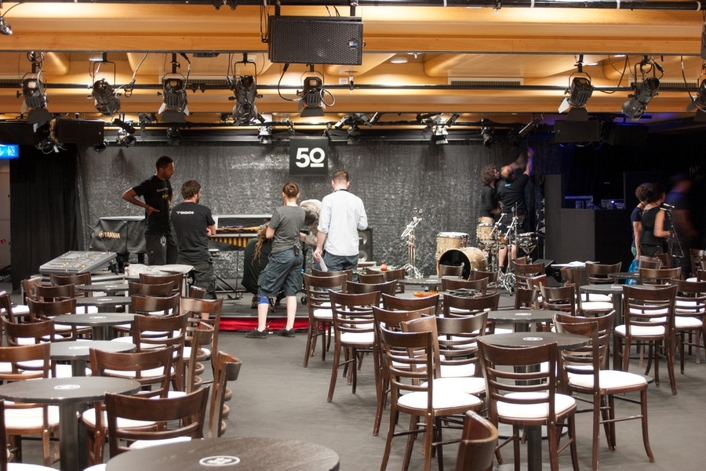 A lot of Audio Expertise

Leaving aside the question of 48 or 96 kHz, the audio production was demanding. The many channels were kept as multitrack ISO recordings as well as mixed in 5.1 and in stereo.  Three parallel hard disk systems were used for this purpose (Pyramix, Pro Tools and JoeCo) and guaranteed a solid backup strategy. They were interfaced via MADI switched to 96 kHz mode, which halves the MADI channel capacity. So, even more equipment was needed just to transfer the many channels to the hard disk recorders. An additional rack with vintage audio effects such as Lexicon 480L, Tube-Tech, UREI, and Maxx Bass completed the line up in the HD1 audio control room.

In order to match the perceived record levels in the three halls, RTS introduced loudness management last year. Operating according to EBU R128, RTS mixed with -23 LUFS and -3 dBTP in 5.1 and stereo. For the stereo programme for mobile platforms, the standard was modified slightly to -16 LUFS and -0.5 dBTP.

Yannick Dumartineix is proud of the capabilities of RTS’ HD1 and its crew “The details of the audio control room are great, regarding the acoustics as well as the quality of the desk”, he explained. “We all benefit from the high quality audio and video in the truck and we have a skilled team running it. These were the prerequisites to provide services to partners like the Montreux Jazz Festival.” 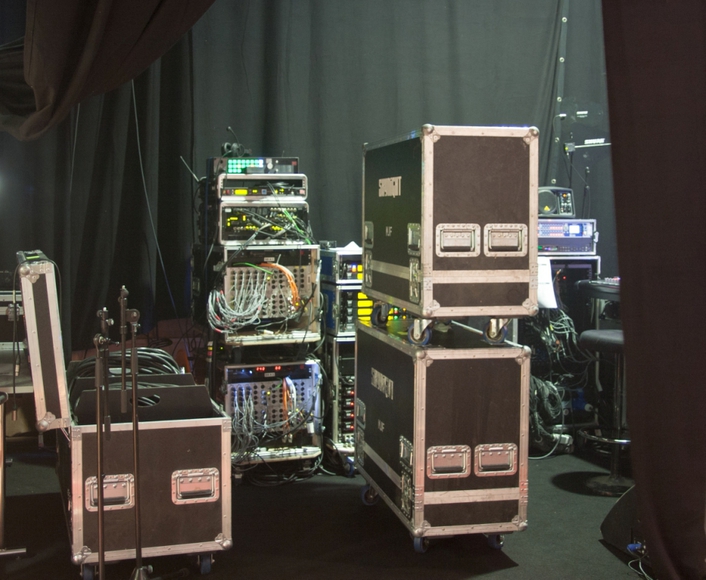 While the audio control room of the HD1 was busy with recording the concerts from the Montreux Jazz Lab, its main vision control room was used to handle the seven cameras within the large Stravinski Auditorium. This hall, with an audience capacity of 4000, hosted the top acts at the Montreux Jazz Festival. An additional container sub-control room attached to the HD1 took care of the four cameras in the small Montreux Jazz Club, which offered an intimate atmosphere for around 350 jazz fans. The video recording was done on EVS servers in the HD1 sub control room. Incidentally, the recording format was an AVC-Intra MXF1080i with 16 audio channels. So in a way, the entire HD1 with all its different control rooms and sections was working for all three stages at the same time. It is complemented by the RTS HD3 which is used for the video part from the Montreux Jazz Lab, by the RTS Music +, an audio truck working at the Montreux Jazz Club and by the audio truck Le Voyageur responsible for the audio from the large Auditorium Stravinski.

Nearly all of the RTS OB trucks are designed as flexible multi-purpose vehicles. The Swiss broadcast market is way too small for highly specialised OB trucks. This flexibility might well explain why one finds so many creative recording locations in Switzerland.  The Swiss crews are used to improvising and adapting their equipment to match the requirements to an even greater extent than is usual in the OB business.

The video programmes, including the audio recordings, are intended for several purposes. During the live concerts, they fed the Big Screen at the stage as well as the internal TV channel. They also served as sources for the web services, daily live-streaming of the festival’s website, and were shared with the TV and radio broadcasters. Some concerts will end up on Blu-Ray, DVD or vinyl one day as a part of the Live at Montreux collection. Therefore all performances are recorded in the best way possible in order to ensure flexibility. And of course the entire content is finally saved for the future in a long-term archive for protection, enhancement and diffusion process, as part of the UNESCO Memory of the World Register. 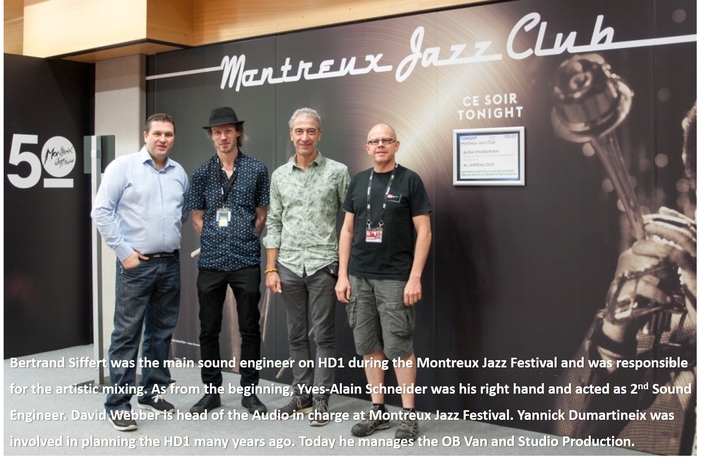 More channels and a higher packing density – these attributes of the new audio DSP unit of HD1’s AURUS mixing console were crucial for the Montreux Jazz Festival recordings. The 76 buses  were especially helpful in generating the many different mixes and output signals.

The Stravinski Auditorium, with an audience capacity of 4000, is by far the biggest location. All concerts from the Stravinski Auditorium were recorded by the purely audio OB truck Le Voyageur. The acts staged at the smallest location, the Montreux Jazz Club for 350 jazz fans, were recorded by the RTS Music +, also purely an audio truck. Most of the video recordings were produced in or with the help of the HD1. RTS used the video part of another truck, the RTS HD3, only for the six cameras in the Montreux Jazz Lab.