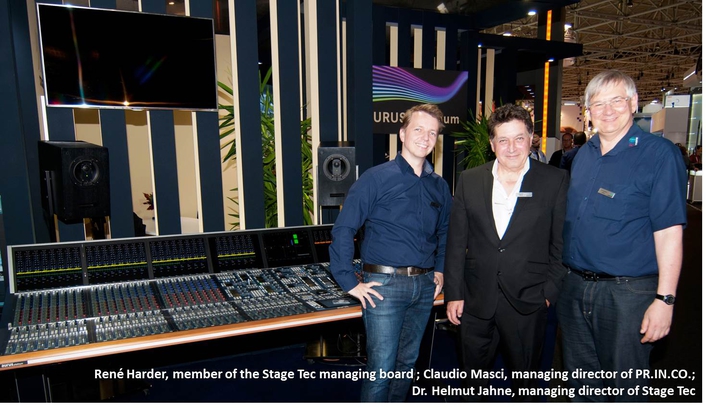 Italy-based RAI and Berlin-based manufacturer Stage Tec have signed a framework agreement for 18 AURUS Platinum mixing consoles and NEXUS for a total of 3.5 million Euros for 3 years. Stage Tec and PR.IN.CO., the Italian distributor, announced the deal at IBC in Amsterdam. The contract is the result of an international tender which Stage Tec succeeded in winning. Over the next three years, RAI will receive 8 large AURUS 48 fader consoles and 10 consoles with 40 faders. Each console is complemented with a NEXUS STAR router. The mixing consoles' audio DSP power is standardised at RAI and includes the new Platinum DSP.

RAI and Stage Tec Berlin – that’s a successful cooperation which has lasted more than 20 years and is still going strong. "Even though we look back on a long and successful collaboration, deciding on the Stage Tec mixing consoles was not a foregone conclusion – the decision was made after almost a year-long tender process during which performance was benchmarked extensively," explained Claudio Masci, Managing Director of PRINCO, when the sale was announced at IBC. "RAI previously had run several tests with AURUS Platinum and satisfied themselves of its performance and suitability for broadcast use."

The AURUS Platinum consoles will be delivered primarily to Rome and Milan, where they will be used for entertainment programmes and in OB vans. At 40 and 48 faders, the size of the consoles offers flexibility in all areas. Thanks to the powerful new audio DSP unit, Platinum DSP, the AURUS consoles have plenty of reserve capacity for mixing ambitious surround productions.

"The tendering process began while Stage Tec was in the middle of restructuring. RAI believed in Stage Tec and our products won them over, which shows that we are on the right track," says a delighted Alexander Nemes, Sales Manager at Stage Tec, and he adds. "We sincerely thank Claudio Masci and his assistant Martina Sterpa from PR.IN.CO for their tireless dedication. This extensive project would not have been possible without their great commitment."