.
Montreux Jazz Festival takes place annually on the glorious setting of Lake Geneva. It has played host to the who's who of music since its inception, almost half-a-century ago, with acts as eclectic as Miles Davis and Marcus Miller, to Alicia Keys and, this year, Pharrell Williams,  and they always come back for more! DiGiCo consoles a key component across the Festival’s audio system, with Pharrell also bringing in his own SD7.

This is year 48 for Montreux, and  be it on the modest, yet ultra-cool outdoor Music in the Park stage; the 1,800-capacity Music Club (formerly the Miles Davis Hall); or the quite majestic Stravinsky Auditorium, where Montreux debutant, Pharrell Williams, had the crowd begging for more during week one, DiGiCo is always in control.

In fact, all the leading DiGiCo models are in play, from the flagship SD7, which holds fort in the Stravinsky, to the ultra-compact SD11, which sits in the same venue providing talkback, alongside the house SD5 in monitor world. Furthermore, SD8s, SD10s, and SD9s all have their part to play, in the Jazz Lab, the Jazz Club, the Rock Cave, and Montreux Palace.

“My relationship with DiGiCo has always been strong, not only because of the quality of product, but because of the personal service we always get from their team,” says sound coordinator at Montreux, David Weber. Incidentally, Weber made his Montreux debut the same year as DiGiCo, in 2009. “I was brought in here as they needed someone who wasn't going to be heavily involved with the business side of Montreux – just the music; they needed someone that was into the festival, and would concentrate solely on the audio. So, I specified in DiGiCo consoles, Meyer Sound loudspeakers, and Shure microphones, which together is a fantastic mix. DiGiCo is on all of the stages here at Montreux; it's the perfect solution, and the reliability has been superb, we've had no issues at all. In fact, I like the consoles that much I've even bought my own SD9! It's on one of the festival stages at the moment, and when we've wrapped the event up, it's coming home with me!” 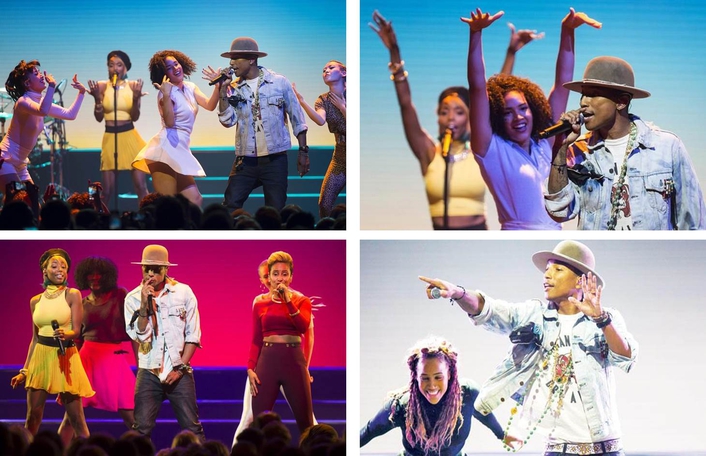 It's not just Weber that thinks like this. Pharrell's FOH and monitor pairing, Kyle Hamilton and Jeremy Peters, are adamant that they could not deliver their show accurately using anything other than DiGiCo kit and brought in their own pair of SD7s for Montreux.

“It's about finding a consistency with Pharrell and using the SD7s, we're able to do that,” reveals Hamilton, adding that the effects inside the desk are of the highest order. “Pharrell's vocal chain just hits an Avalon 737 compressor, then heads straight into the console, where I do my EQing, effects, and compression. Because the preamps and processing are great on the SD7, that's really all I need to do, which suits me, as less is more is always my preferred approach.”

Peters has a similar theory, and cites the SD7 as the perfect tool for his job at stage left.

“What I really like is the versatility of the DiGiCo,” he explains. “The SD7 gives me the luxury of quality dynamic processing and multiband compression, so I have no need for much else – just some cool Waves plugins to give a little extra colour to the sound.”

Both engineers are also benefitting from using DiGiGrid at Montreux, which has been transforming their workflow. 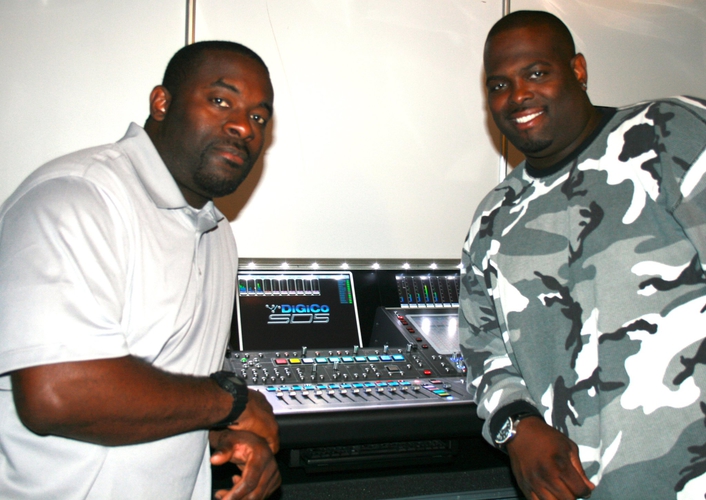 “What we did on this gig was a lot of fun, and also amazing,” smiles Peters. “Kyle and I used the DiGiGrid MGB and both multitracked every song every day, so that when the band leaves, we can come back and make any changes we need to to the mix. Since Pharrell is so serious about the record, we took the live elements and the non-live elements, and did an A-B test with the record, and made them perfect. So when Pharrell hears Kyle's FOH mix, it's the record, but with a live feel. It helps us create the perfect sound.”