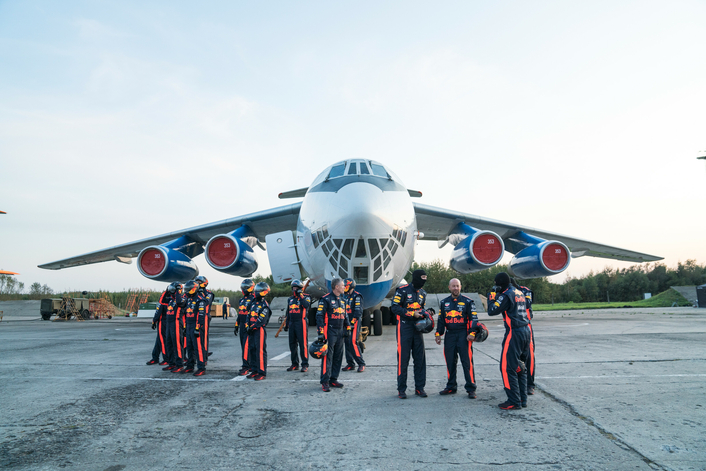 The Live Demo Team has taken our show cars to the world’s highest pass at Khardung-La in the Himalayas and driven the lowest road, racing along the shores of the Dead Sea in Jordan. They’ve driven on snow, on ice and across baking desert hardpan, and we thought they had no more worlds to conquer – though that turned out to simply be a lack of imagination on our part. The Team needed a new challenge after three record breaking pit stops this season – and they found it at an altitude of nearly 33,000 feet on board an Ilyushin Il-76 MDK cosmonaut training plane.

Drawing on the help of the Russian space agency Roscosmos, the Team took the 2005 RB1 car to the Yuri Gagarin Cosmonaut Training Center in Star City and set about proving that the sky really is the only limit.

Over the course of a week, pit crew members took a crash course in cosmonaut training in preparation for multiple Zero-G flights in the plane’s fuselage along with the F1 car and a 10-strong film crew. Each flight consisted of a series of parabolas, with the aircraft climbing at a 45° angle, then falling in a ballistic arc, to produce a period of weightlessness of around 22 seconds before the next climb. 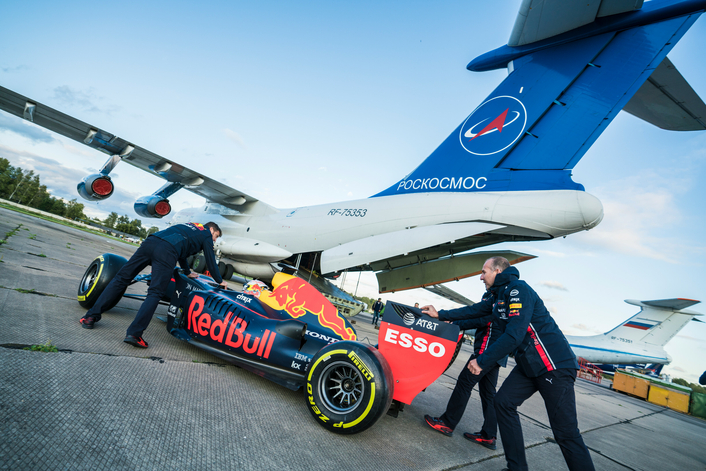 Even with optimum conditions, filming the pit stop was a difficult proposition. Car and equipment had to be carefully secured before and after each weightless period (because no one wants gravity returning when the car, the tyres or the pit crew is a metre off the deck), reducing each filming session to a take around 15 seconds. 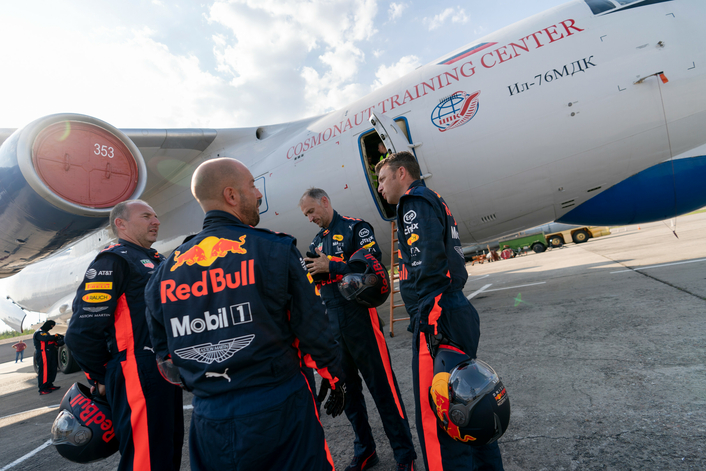 Putting their bodies through the strains of zero-gravity certainly left the pit crew with a whole new level of respect for their newfound cosmonaut colleagues and proved the most physically and technically demanding activity the Live Demo Team have ever undertaken. 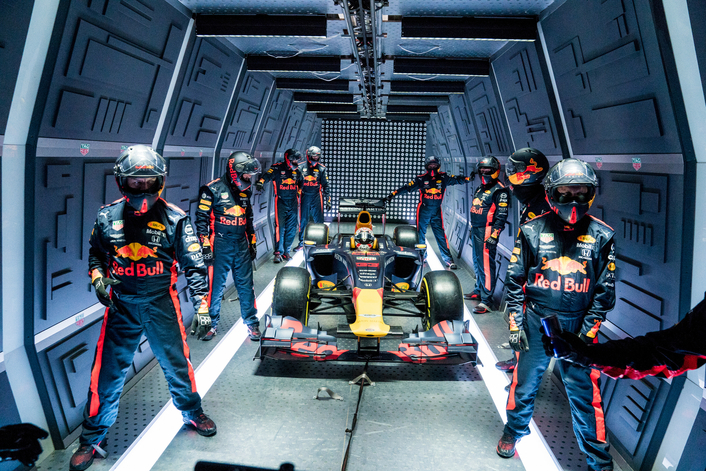 “It pushed us harder than I thought it would,” says Support Team Chief Mechanic Joe Robinson. “You realise how much you rely on gravity, when you don’t have any! Something as straightforward as tightening a wheelnut becomes very difficult when the car is floating, and the only control you have is through the stiffness of your ankles, tucked into floor straps. It challenges you to think and operate in a different way – and that was brilliant. It was a once in a lifetime opportunity and honestly, I could have stayed and done it all month. It was amazing. I think it’s the coolest, most fun thing the Live Demo Team has ever done with a show car.” 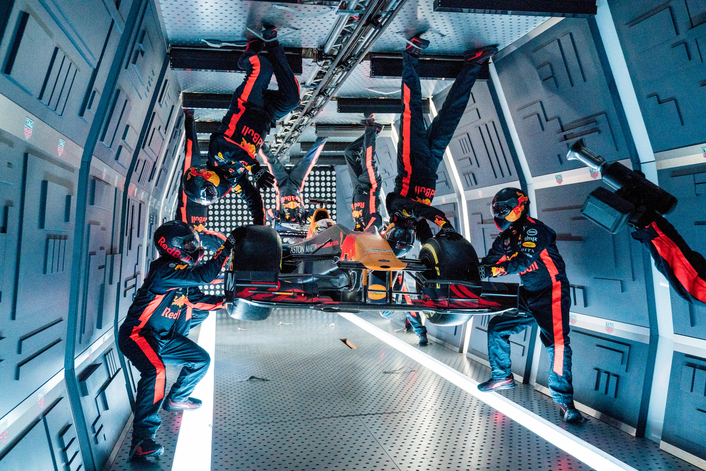 Support Team Co-ordinator Mark Willis echoed Joe’s comments “My stomach was fine – but it felt like my head was going to explode. It took two or three runs to understand what was happening. At first, I couldn’t think straight. My brain couldn’t compute what was happening… It took two or three parabolic flights to be able to think properly again. I’ve been involved in some special events from slaloming the car in Kitzbühel, to the salt lakes of Argentina, we’ve been to some strange places and done some strange things – but ultimately this is the oddest – but also the most special because there’s simply nothing comparable. You might get a second of the effect on a rollercoaster – but to have that sensation for 20-25 seconds and to work on the car in that time, it’s out of this world.” 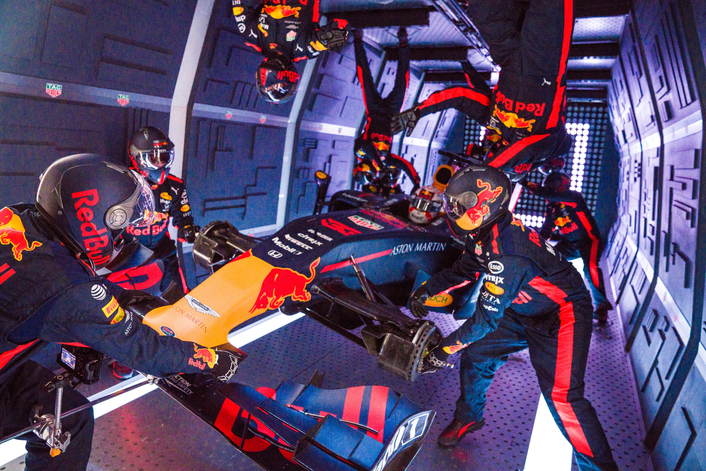 The RB1 came out of storage for this special appearance because it has rather more slender lines than a current car, making it easier to manoeuvre around the Ilyushin’s cargo deck. The 2005 model is also lighter than a contemporary car, and while weight shouldn’t matter while weightless, having it stripped down and completely drained made it easier to understand how the car would behave when being manhandled in the purpose-built flying studio set. 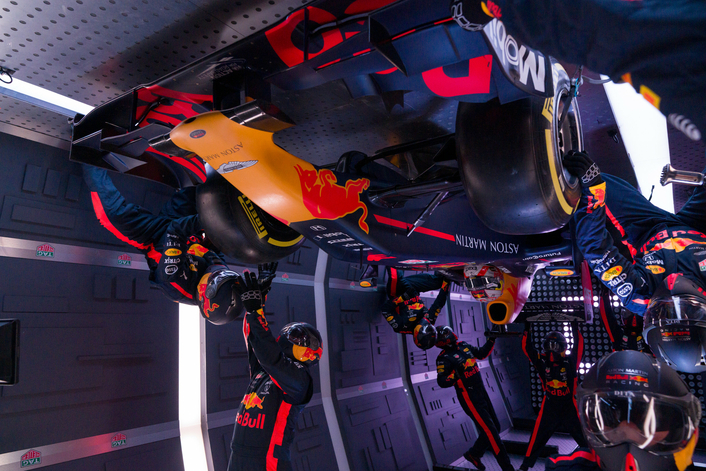 The Zero-G pit stop film is live now. You may be tempted to believe this is the product of very high-end CGI – but this is a real F1 car, floating in a real plane filled with real mechanics. Most of them have come back to Earth now – though they’re keen we do the next one on the Moon.