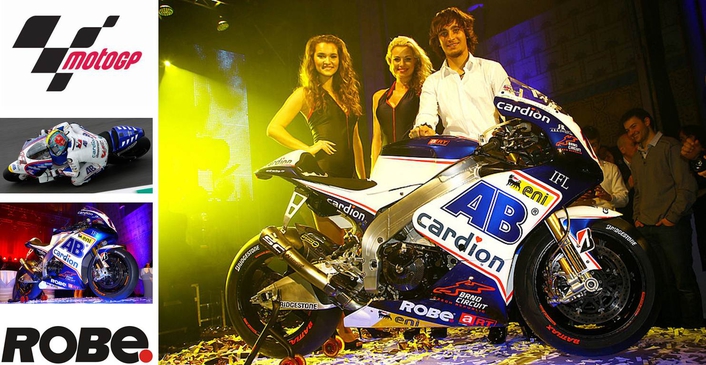 Karel, aged 23 and born in Brno, Czech Republic, is competing as part of the Cardion AB team for the 2013 season, riding a super-charged new cutting-edge Aprilia ART (Aprilia Racing Technology) bike. Grand Prix motorcycles are purpose-built racing machines with an engine capacity up to 1000 cc that are not available to the general public … or legally ride-able on public roads! 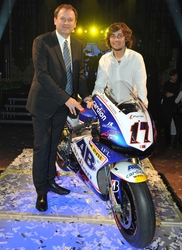 Says Robe CEO Josef Valchar, “We are extremely proud to be sponsoring Karel, who is competing in his third season at the very top level of international motorcycle road racing. He is young, ambitious, talented and has all the qualities required to become a champion in one of the most exciting motorsports”.

This was developed in 2012 to emphasise the affinity between the leading entertainment lighting manufacturer and its creative and varied customer base, referencing the dedication and commitment needed for success both by the company and by athletes and sports people worldwide.

There are also obvious parallels between the technologies and innovation involved in the worlds of motorcycle racing and moving light manufacture.

The MotoGP season features 18 international races in 15 different countries throughout Europe and across Asia, Australia, the Middle East and the USA.

Robe supplied additional lighting that helped make the event look even more fabulous with the help of its ROBIN LEDWash 600 and MMX Spot fixtures. Special gobos were produced for the MMX Spots featuring team member names and sponsor logos.

Robe is also planning a unique special event based around the MotoGP sponsorship at the 2013 Prolight + Sound exhibition in Frankfurt in April …... so watch this space for further details!