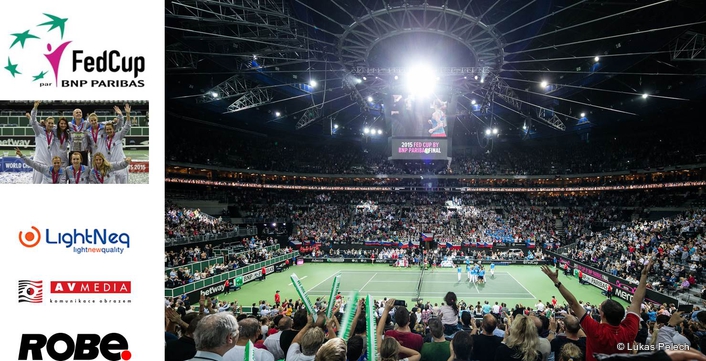 Czech Republic won its fourth Fed Cup women’s tennis title in five years in the 2015 final staged at Prague’s O2 Arena in front of a capacity 14,500 audience who enjoyed a nail-biting weekend of superlative tennis with their team playing a really strong Russian contingent  … and Robe was one of six very proud sponsors.

Robe moving lights were also used for the high energy Opening Ceremony (OC) spectacular show designed by Milan “Mejla” Froňek from Lightneq, which prepared everyone for plenty of on-court excitement to follow. The installation and technical support was co-ordinated by Prague-based AV Media. 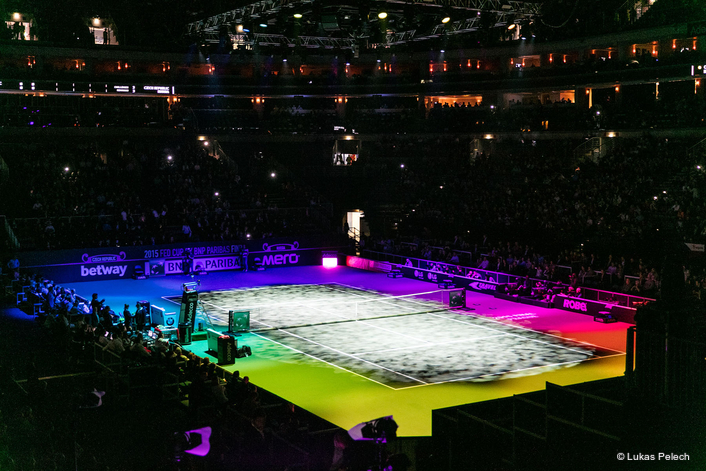 Milan has created high impact lighting schemes for numerous other top sporting events including the World Ice Hockey Championships held in the Czech Republic in May, the Sochi Olympic Park installation at Letna Park, Prague, during the 2014 Sochi Winter Olympics and for the award-winning Czech House during the 2012 London Olympics.

These were arranged on four trusses flown around the O2 Arena’s central LED display cube For the opening ceremony these production trusses were lowered in to a trim height of 12 metres above the playing area below.

The BMFL Blades were the stars of the intense 2 minute opening show!

Milan used them to map and project a tennis court created from light onto the area below, with gobos dividing it up with the line markings.

Also, with precision use of the BMFL Blades’ framing shutters and gobos, the lights mimicked a computer generated tennis match for a section of the show … two tennis rackets batting a ball – all made of light - between them, which really got the audience on their feet.

The tennis game idea was first initiated by the Robe’s own lighting project manager for the event, Petr Kolmacka. Other elements of the show included the morphing of the three colours making up both the Czech and Russian flags combined with strobe effects and the rainbow colours on the tennis court to symbolise peace and tolerance. 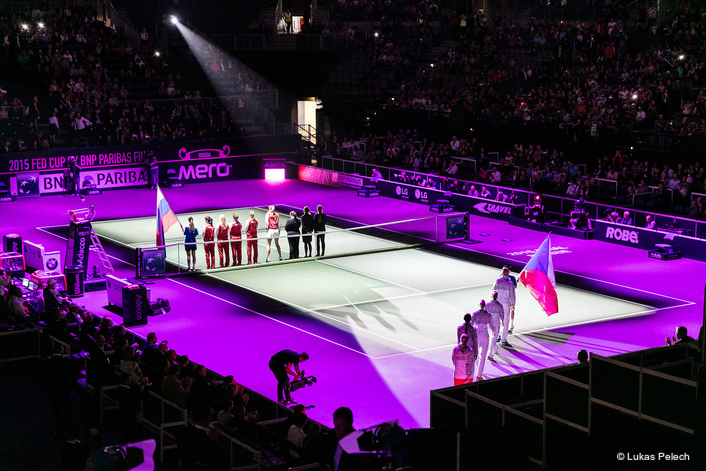 The rest of the lights were used for general lighting during the OC on the play area and around the audience, ramping up the drama as a rousing music track blasting out through the PA system.

Milan comments, “The BMFL is a great fixture. The more you play and experiment with these units, the more you can discover they will do – they are really bright and fast. The BMFL Blades were great for creating graphic effects on the play area and are  highly compatible with the LB1000 colour wise.”

Speed and intensity were also the two features he highlighted about the Pointes – essential in a large arena environment like this with a high trim / throw height.

In addition to the Opening Ceremony, the lighting was used to add some razzmatazz for the team entrances. During the breaks in the games, some of the fixtures illuminated parts of the auditorium, and International Tennis Federation (ITF) and Fed Cup logos were projected onto the playing area via custom gobos, together with those of the players’ names.

The lighting get-in commenced two days before the event kicked off and they had only one night for programming due to the tennis teams’ training and warm-up schedules. This was tight, but Milan’s extensive knowledge of the products – he uses Robe regularly in most of his work - and his familiarity with the grandMA2 light console – enabled him to work efficiently to produce a great looking show! 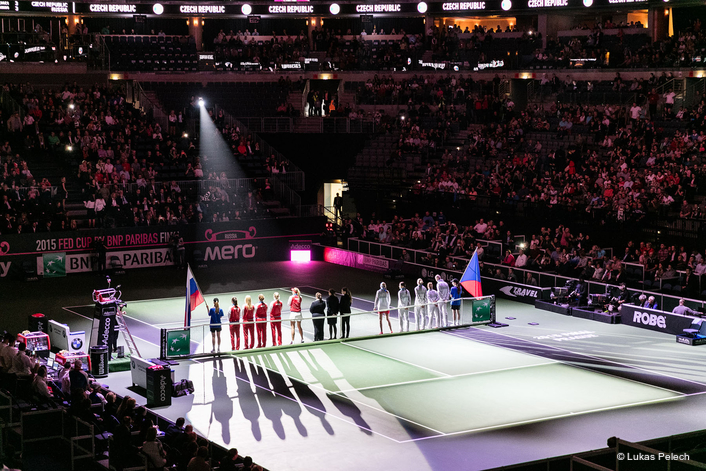 The lightshow matched the high quality of  tennis played throughout the weekend - where the results all hung on the final doubles game on Sunday in which Karolina Pliskova and Barbora Strycova beat the Russian pair of Anastasia Pavlyuchenkova and Elena Vesnina … to a ‘roof-lifting’ ecstatic reaction from the home crowd!

Says Robe’s CEO Josef Valchar, “Well … what can I say, we are all so proud to support our truly world class Czech women’s tennis team, and it was a great honour to be in Prague and witness the final stage of this achievement first hand”.