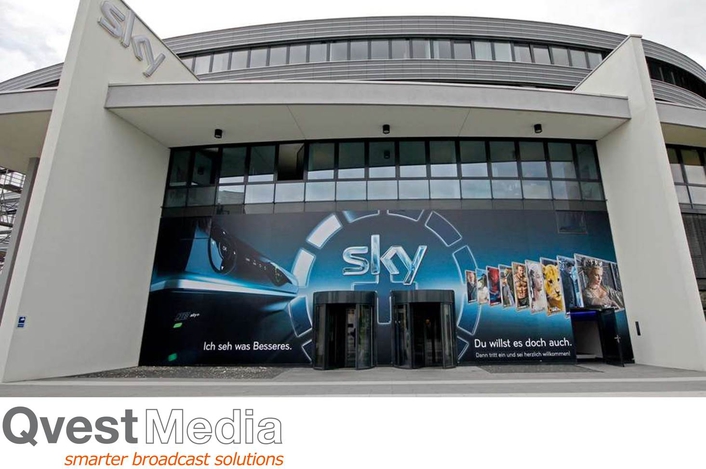 Qvest Media, one of the world’s leading systems architects in the field of broadcasting and media technology, has been contracted by Germany-based Sky Deutschland with the technical construction of a new broadcasting centre for all sports-related productions. With this project, the company will implement one of the largest and most modern broadcast IT infrastructures for live sports productions currently in Europe.

The new construction of the pay TV channel called “Cube” will be built at Sky’s media hub in Unterföhring. Spread over more than 1,700 square metres, the new sports production centre will offer enough space for two studios with rooms for direction, editing and production, as well as for continuity suites and the broadcast IT installation. In the future, live sports content from Sky Germany will also be produced here. This includes, among others, the Sky Bundesliga conference, the UEFA Champions League, the UEFA Europa League, the EHF Handball Champions League, golf, tennis and Formula 1 racing.

Qvest Media has been entrusted with full responsibility for the turnkey, technological construction of the sports broadcasting centre. As part of the collaboration, the company has been commissioned to develop workflows and an innovative IP-based back-end, as well as the entire system infrastructure. This also includes the selection and definition of appropriate technology and manufacturers. As part of the contract, Qvest Media is furthermore responsible for the subsequent delivery of broadcast, IT and audio-visual solutions, equipping the studio and production facilities, systems integration, as well as commissioning and support of the on-air phase.

About Sky Deutschland
With over 4.6 million customers and annual revenues of 2 billion Euros, Sky is the pay-TV market leader in Germany and Austria. The program offering at Sky includes live sport, films, series, kids’ channels and documentaries. Sky Deutschland with its headquarters in Unterföhring near Munich is part of Sky plc, Europe’s leading entertainment group. 21.8 million customers in five countries are watching the exclusive Sky programs whenever and wherever they want (Status: 30 June 2016).