The Production Equipment for the FIFA World Cup 2018 Russia™ 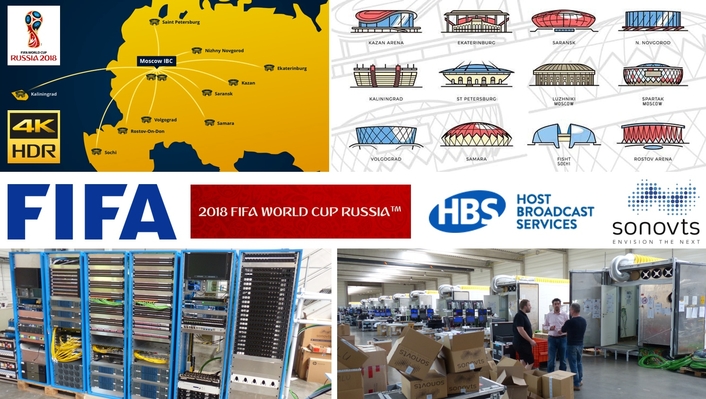 Three Days to Go until the first Match in Moscow

Every four years the FIFA World Cup showcases the skill and talent of the world’s best players, but it is more than just a football tournament: It is the aspiration of FIFA TV to deliver a world class TV production. This year all 64 matches will be produced on the basis of a 34-camera plan with increased coverage, content and features in HD 1080p, in UHD and 4K HDR. In addition to a wide range of multi-media services that will complement and enhance the broadcast of the FIFA World Cup we will see the premier of the Video Assistant Referee (VAR) system at this year’s World Cup.

The 2018 FIFA World Cup Russia will be HBS’ fifth FIFA World Cup™ as Host Broadcaster. The FIFA World Cup in 2018 will be the biggest event to use one single production to create both UHD and HD content. Utilizing the advantages offered by Sony’s SR Live (Slog3) production techniques this event will see over 370 Sony cameras, 29 XVS switchers and over 1000 monitors used to deliver both UHD HDR and HD SDR options to broadcasters across the world as part of the FIFA TV production delivered by Host Broadcast Services (HBS). 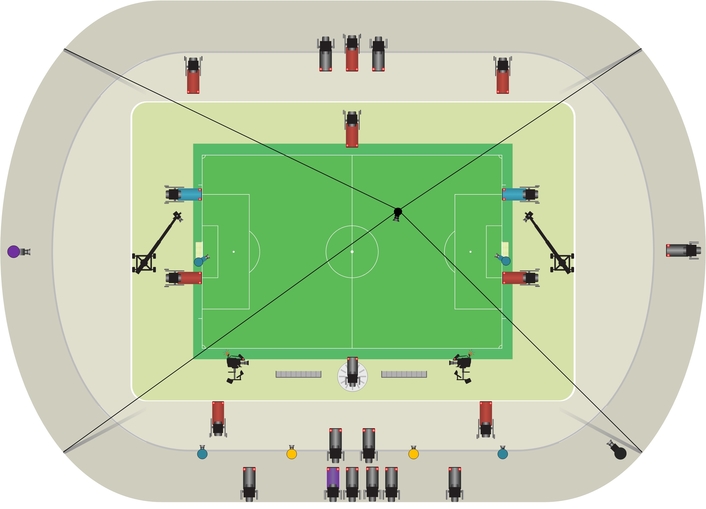 Building on the successful operations of the Equipment Room Containers (ERC) during the 2014 FIFA World Cup in Brazil, HBS again decided to go forward in this direction also for the 2018 FIFA World Cup in Russia. Under the leadership of HBS’ Christian Gobbel, Munich-based system integrator sonoVTS started with the preparation of the set-up of 12 ERC’s in October 2017. The ERCs were shipped back from Brazil to Germany after the World Cup 2014. However, for the production of the World Cup in Russia the containers needed to be upgraded to produce three video signals in parallel: 1080p, UHD and 4K HDR. 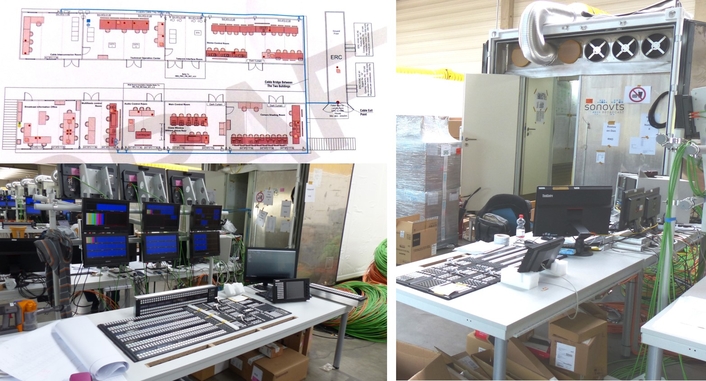 Setup of the HBS Container Home at all 12 Arenas

In order to ensure the production of live replays, slow-motion action replays, highlights, and the openers & closers during any of the 64 matches, all 34 cameras/arena will be recorded on EVS XT 4K production servers in channel MAX configuration. One ERC is located for the duration of the competition at the TV compound at each of the 12 venues and connected to the HBS container house. The ERC is also home to the Sony camera control units, the Imagine Communications routers, multi-viewers and digital glue products, the Sony vision mixer electronics, the Lawo audio mixer electronics, the Riedel Artist intercom matrix, and the Lawo Virtual Studio Manager (VSM). Additional equipment like the Cisco IT routers, the Guntermann + Drunck KVM switches, the Genelec audio monitors, the Tektronix measurement equipment and the audio monitoring units from TSL and Sonifex as well as the furniture and monitor racks are supplied by system integrator sonoVTS. 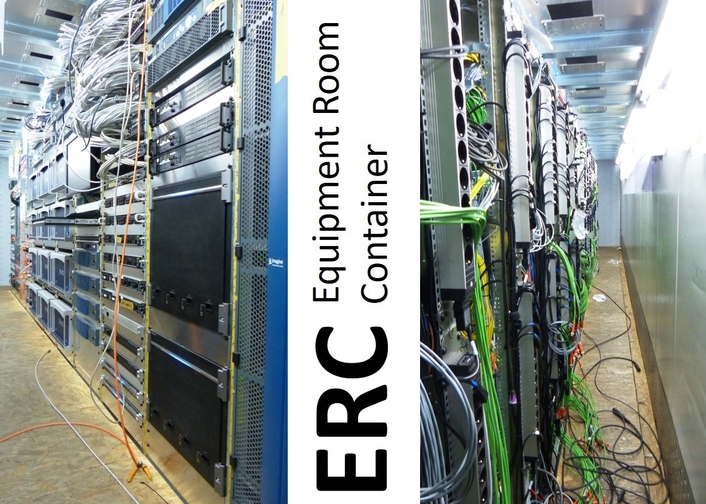 HBS’ Christian Gobbel, who is involved from the project's inception through to its implementation at the 12 broadcast compounds in Russia, sums the whole thing up nicely: "The Equipment Room Containers are essentially very, very big OB vans without wheels, built to our exact specifications. The great thing is to be able to test the equipment and the interfacing between all the components well ahead of the event. This is a huge step forward for us and a great relief in the busy days before the Opening Match. 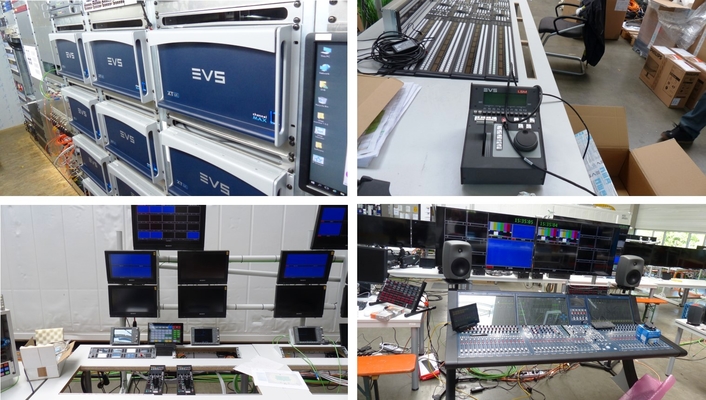 Production Equipment for the FIFA World Cup in Russia

sonoVTS is also responsible for the 12 Technical Operation Centres (TOC): The TOC is located in additional portable cabins at each venue’s broadcast compound and is the main distribution point and the interface between the production facilities, the Media Rights Licensees (MRLs) and the telecommunications provider. The TOC is the main operational area for signal management. It accommodates all necessary equipment (routers, patch panels, audio, video monitoring, measuring and display equipment) and is connected to the ECR. Multilateral feeds received from the HBS production facility are distributed to MRLs on site and are send to the Master Control Room (MCR) at the IBC in Moscow. Unilateral VandAs to and from the IBC are also monitored and distributed via the TOC. 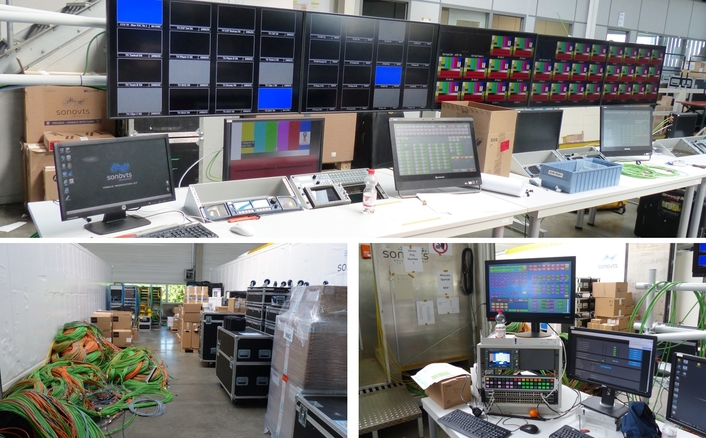 End of April all the ERCs, TOCs and additional equipment was shipped by SOS Global Express from Munich to the 12 arenas in Russia. In total 36 trucks were necessary for the transportation. Upon arrival the preconfigured 53,000 pieces of cable (total length 650km) were enrolled and the ERCs and TOCs were connected with the operational equipment in the HBS container house. Then the equipment was tested and now three days before the first Match they are up and running. 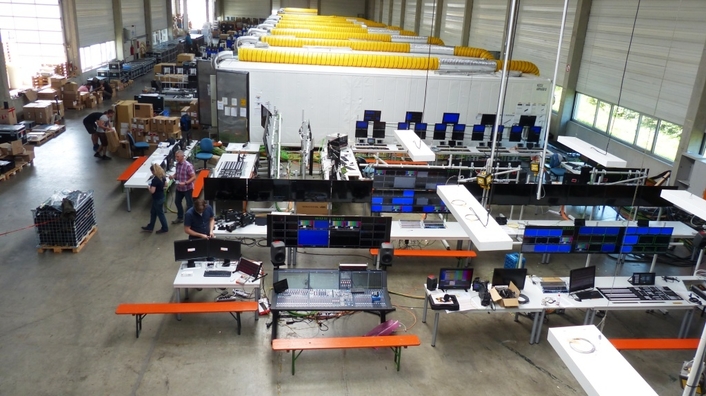