An Old Bridge, 14 Cliff Divers, and a Centuries-Old Tradition 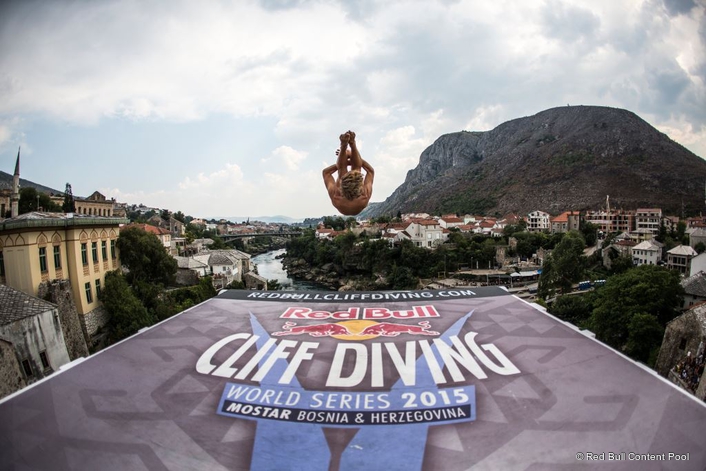 Cliff diving – in a place where diving from great heights has been a tradition for four-and-a-half centuries – a hand selected group of 14 of the world’s best cliff divers will be part of the first ever World Series competition at the ‘Stari Most’, the old bridge of Mostar, and the country’s most recognizable landmark. The first dives from the bridge date back to 1664, the first competition to 1968, and August 15, 2015 marks the day when Gary Hunt, the leading Brit, will launch acrobatically from the 27m platform to continue the pursuit of the ‘perfect season’. After the season’s closest finish on the Portuguese Azores and two new faces on the podium, the World Series will meet fanatical cliff diving fans and touch new grounds in Bosnia & Herzegovina. 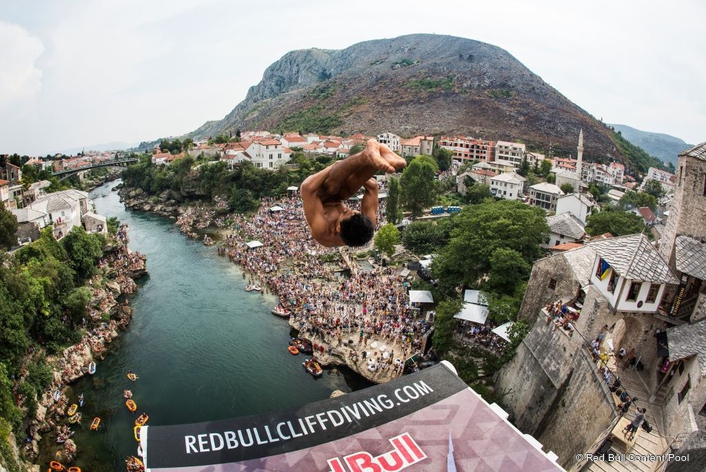 Sergio Guzman of Mexico dives from the 28 metre platform on the Stari Most bridge during the sixth stop of the Red Bull Cliff Diving World Series, Mostar, Bosnia and Herzegovina

Eternalized in the city’s flag and coat of arms, life in Mostar has been centred on the humpback bridge ever since its construction in the 16th century. Iconic ‘Stari Most’ is a place where young men from Mostar prove their courage in a sort of maturity test, and the tradition of the diving competitions is almost 450 years old. Equally iconic as the bridge, is the image of a diver soaring through the air from the bridge towards the fast and cold water of Neretva River. Gracefully arching over the emerald water of Neretva River, connecting two parts of the old town in Mostar, it’s surrounded by fortified towers on both sides and fits seamlessly into the landscape, creating an impressive sight. The bridge is, together with the surrounding Old City of Mostar, a UNESCO's World Heritage Site, and is often cited as one of the most beautiful bridges in the world. 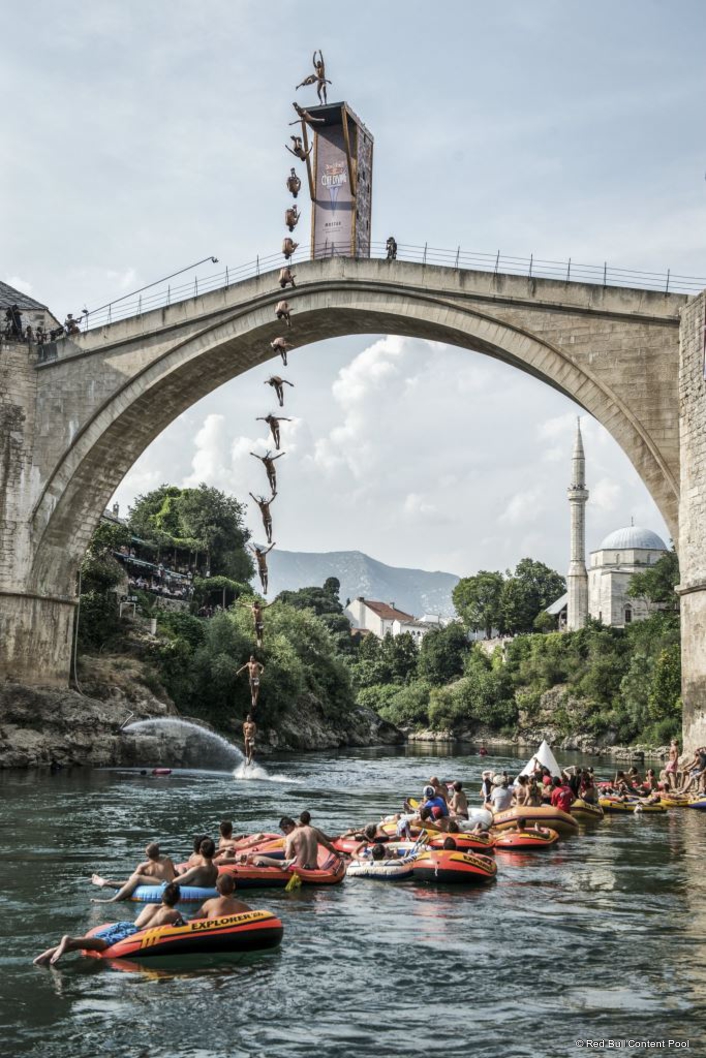 Orlando Duque of Colombia dives from the 28 metre platform on the Stari Most bridge during the sixth stop of the Red Bull Cliff Diving World Series, Mostar, Bosnia and Herzegovina

The bridge was destroyed during the war in Bosnia and Herzegovina, and later faithfully reconstructed using the original stone blocks taken out of the river below. The single span stone bridge, in today’s form, was inaugurated with a diving exhibition in 2004, and for the first time this August will be the venue with longest diving tradition in the World Series.

The Mexican had snatched the lead with a superb effort in Friday’s Seeding Round and went on to join a list of only 8 divers who have won an event in Red Bull Cliff Diving history. It was a stunning display of diving in Mostar’s old town on this red-hot Saturday afternoon. 12,000 fanatical spectators saw fellow Mexican Sergio Guzman score the first ever podium finish of a wildcard, coming second from the 28m-platform atop Stari Most bridge. In the season’s first competition not dominated by Britain’s Gary Hunt, America’s David Colturi completed the podium. 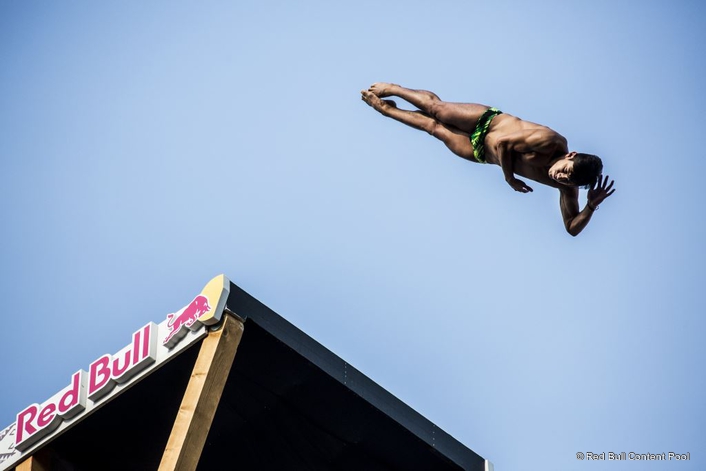 Jonathan Paredes of Mexico dives from the 28 metre platform on the Stari Most bridge during the sixth stop of the Red Bull Cliff Diving World Series, Mostar, Bosnia and Herzegovina

One day after his 26th birthday and after Mexico’s rising star started closing in on the podium’s top spot during the last competition in the Azores, Jonathan Paredes took the day’s high score (480.90pts) for the first time in his World Series career. Another premiere followed in second position with 24-year-old Sergio Guzman (471.05pts) being the first invitee to finish that high in the rankings in only his fourth World Series appearance. David Colturi (470.60pts), who sneaked into the final of the top-8 as the lucky loser, pulled off a score of 10 with an outstanding last dive – with 154.00pts the highest scoring dive of the competition - to secure 3rd place. 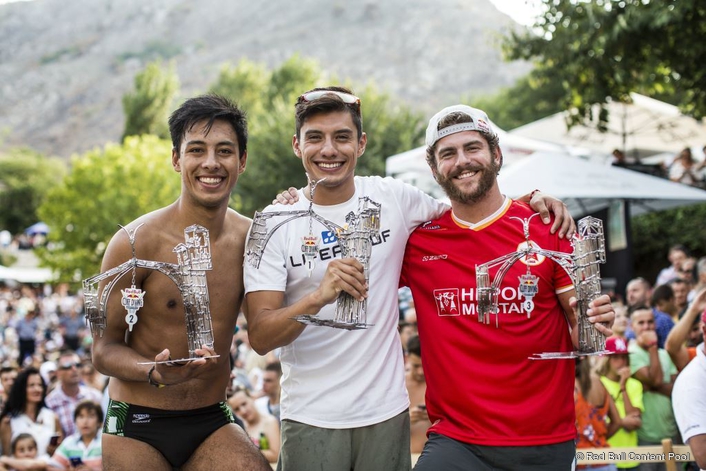 Second placed Sergio Guzman (L) and event winner Jonathan Paredes (C) of Mexico, and third placed David Colturi (R) of the USA celebrate on the podium during the sixth stop

After 5 wins in a row and for the first time this season Gary Hunt missed the podium with a 5th place; however, the ‘brilliant Brit’ secured his 5th overall victory with two stops remaining. With 650pts Colombia’s Orlando Duque – 7th in Bosnia and Herzegovina – is now only one point ahead of today’s winner in the season standings. Former Olympian Blake Aldridge fell behind in the overalls after losing his head-to-head battle to wildcard Anatoliy Shabotenko and is now in 4th (620pts). With two more competitions to come, David Colturi sits in 5th (560pts) and with only the season’s top five athletes automatically qualifying for a 2016 season, a thrilling climax can be expected. 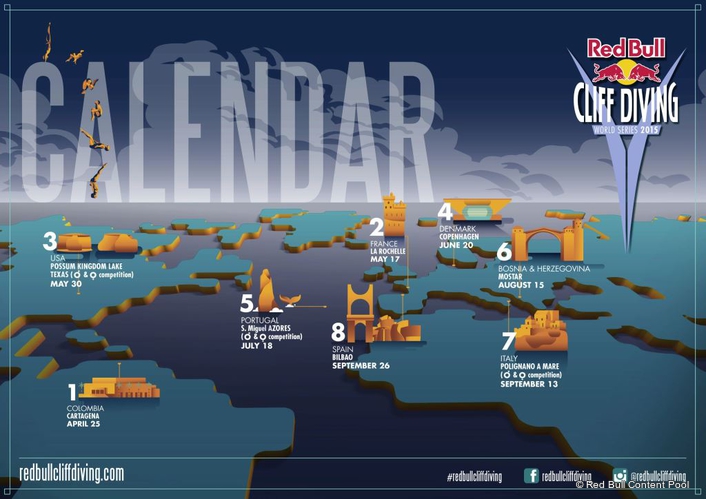 From a place where diving has been a tradition for more than four centuries the World Series moves on to Polignano a Mare, Italy, for the season’s penultimate stop in four weeks’ time, where the Women’s World Series champion will be crowned.