The 66th Four Hills Tournament ended on Saturday with record ratings and the outstanding victory of Poland's Kamil Stoch, who was able to succeed in each of the four events. The so-called Grand Slam had only been achieved once to date, back in 2002 by Sven Hannawald. The successful conclusion of this year's event also rings in good news for Infront's ski-jumping marketing activities.

The Austrian Ski Federation (ÖSV) and the German Ski Association (DSV) have extended the contract with Infront for the winter sports event by another four years until the season 2021/22. The winning cooperation, which began in the 2010/2011 season, covers the next four editions of the Four Hills Tournament. Infront will continue to own all the marketing rights for the event worldwide.

The Four Hills Tournament is the biggest annual event in ski jumping with the legendary New Year's jump in Partenkirchen. It consists of four competitions held in Germany (Oberstdorf and Partenkirchen) and Austria (Innsbruck and Bischofshofen), always around the turn of the year.

Stefan Krauß, Managing Director of Infront Austria said: "I am very pleased that we can continue the cooperation for the marketing of the Four Hills Tournament with DSV and ÖSV for another four years. Both associations are among the most important representatives within the International Ski Federation (FIS) and the Four Hills Tournament is certainly one of the most traditional sporting events worldwide. It is a special honour for Infront to go into the third cycle together with the ÖSV and DSV."

Walter Vogel, Managing Director of DSV Marketing GmbH said: "The Four Hills Tournament is undoubtedly one of the most important premium products in international sports. Thanks to the good and close cooperation with Infront, we were able to gradually increase the quality of the tour for all four locations over the past few years. In this respect, the continuation of our mutual partnership is a logical consequence for all the parties involved, both from an economic as well as sporting point of view."

ÖSV- President Peter Schröcksnadel added: "I am pleased that the long-lasting cooperation with Infront and the DSV has been extended for another four years. This ensures that one of the most traditional sports events of the International Ski Federation can be carefully planned and further developed until 2021/22. The Four Hills Tournament is often referred to as the annual World Championships by media representatives, which is entirely justified given the athletes' starting list and by the services offered. How attached fans are to this event was once again made clear at the Bergisel Ski Jump this year. From early morning until the end of the ceremony, approximately 17,000 visitors have continuously celebrated and cheered for the athletes despite constant and heavy rain. Only a few other sports are so lucky to have such a fantastic audience." 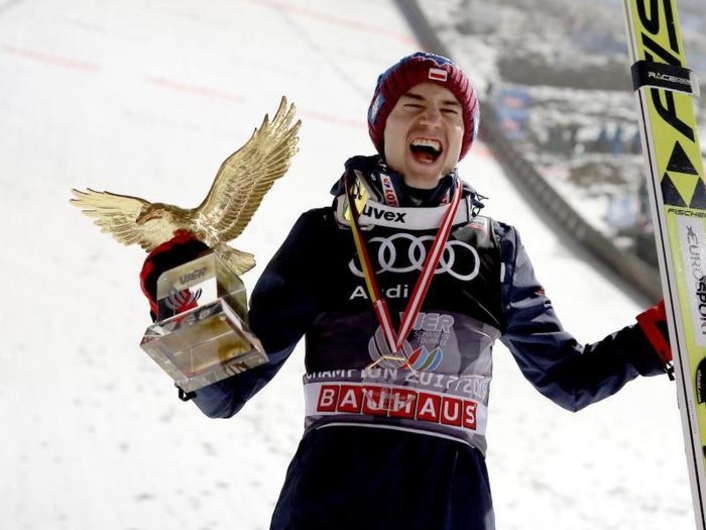 Outstanding victory of Poland's Kamil Stoch, who was able to succeed in each of the four events

Over the past few years, Infront has driven different image promotion initiatives, including the creation of a tour-specific brand identity that provides a high level of recognition among spectators. LED boards of the highest possible quality guarantee ideal sponsor visibility in all weather conditions.
To further enhance value for sponsors, spectators and participants alike, Infront will continue to explore attractive innovations for the Four Hills Tournament.

Infront, a Wanda Sports company, is a leading sports marketing company managing a comprehensive portfolio of top properties. Led by President & CEO Philippe Blatter, Infront covers all aspects of successful sporting events – including distribution of media rights, sponsorship, media production, event operation and digital solutions – and has won a reputation for its high standards of delivery. As the number one player in winter sport and with a leading role in football, summer sports and corporate and personal fitness, Infront enjoys long-lasting partnerships with over 180 rights-holders and hundreds of sponsors and media companies. Headquartered in Zug, Switzerland, Infront has a team of more than 900 experienced staff working from over 35 offices across more than 15 countries, delivering 4,100 event days of top class sport around the world every year. In November 2015, Infront was integrated into Wanda Sports Group, part of the Chinese conglomerate the Dalian Wanda Group.