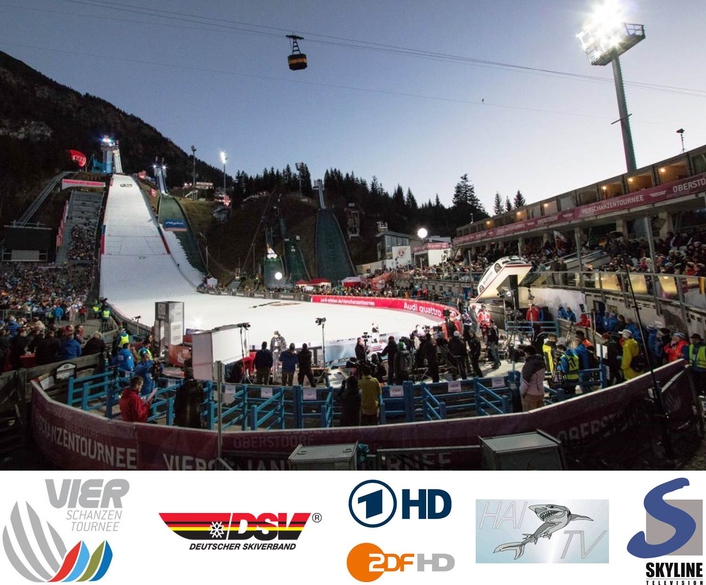 The Vierschanzentournee presented by Audi was carried out between 28 December and 6 January in Oberstdorf, Garmisch-Partenkirchen, Innsbruck and Bischofshofen. In addition to Audi as Presenter, BAUHAUS (workshop, house and garden specialist), Generali (insurance), Intersport (sporting goods retailer) and Veltins (brewery) were involved as Main Sponsors.

Severin Freund won the opening event of the 64th 4-Hills-Tournament in Oberstdorf. With jumps on 126 m and 137.5 m and a total of 307.2 points the World Champion moved up from 6th after the first round and took his first win in a 4-Hills competition. The second and third place went to Michael Hayboeck and Peter Prevc. 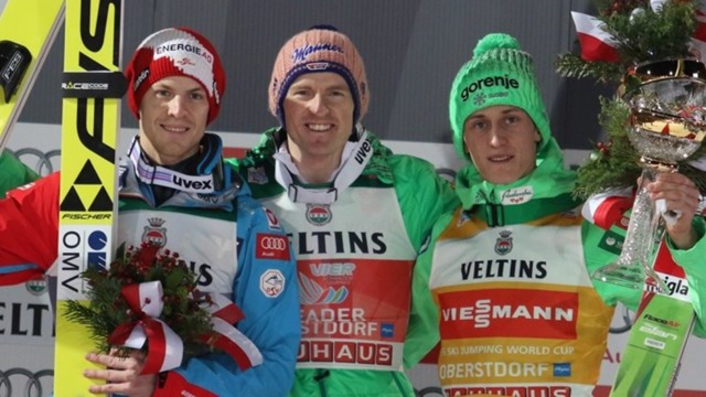 The good performances of the German team around Severin Freund also showed in the ratings of the 4-Hills-Tournament on German television. 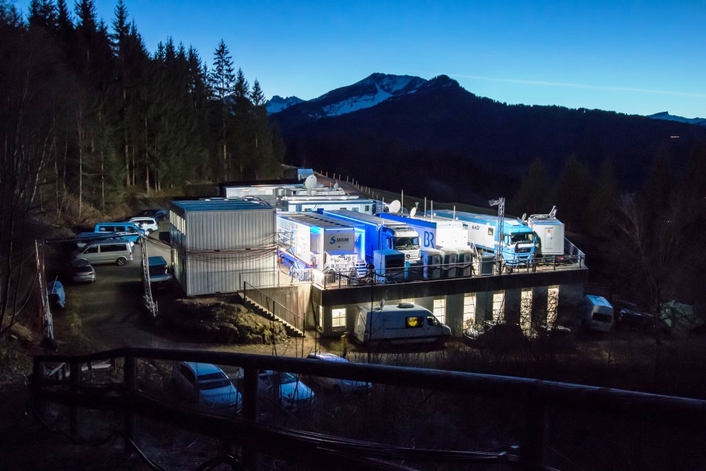 On behalf of Deutscher Ski Verband (DSV) TV Skyline produced the opening competition of the four hills tournament in Oberstdorf.

The TV live production of a ski jumping event demands meticulous preparation with special focus on all athletic and emotional aspects and the complete capture of every move of the top athletes. Furthermore a detailed planning of the optimal camera positions are required including the decision of the optimum focal length of each lens at the camera positions.

A short statement of Thomas Strobl (Director):
"We must prepare our ‘tools', our cameras, so that everything fits perfectly and the "team" is active – like a clockwork . Then we are clocked by all the contents, the events and the stories. But we must always be one step ahead, knowing what may come. All of us! Otherwise it is not possible to maintain the team spirit. If I sense that the current leader now freaks out, fiddling us an emotional storm, my camera guys have to be already there and catch it. Simultaneously we have to be with the leader and the looser, because all the athletes are fighting for the ranking and for points – these people are real lunatics. 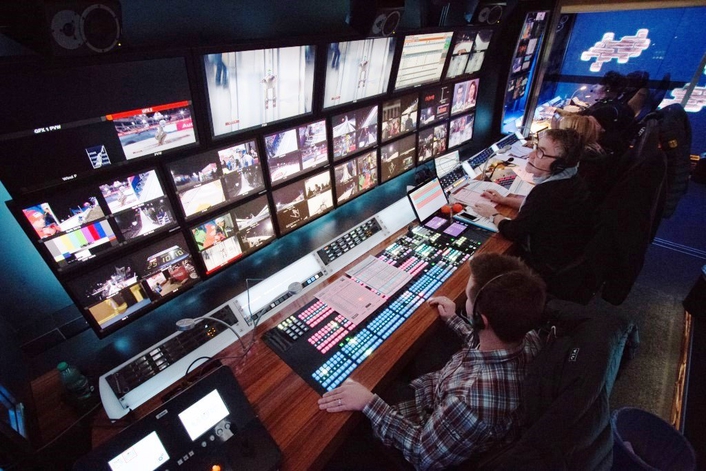 Thomas Strobl surrounded by his team in TV Skyline's Ü7

And when we then come from craft to composition, when the colors shine, when our technical installations work one-thousand percent, when every cameraman, the graphics artist and the SloMotion operators are painting the picture altogether, a lightness rises and sports presents itself as impressive as it is - then everything runs smoothly, then the kitten purrs like on the warm stove bench." 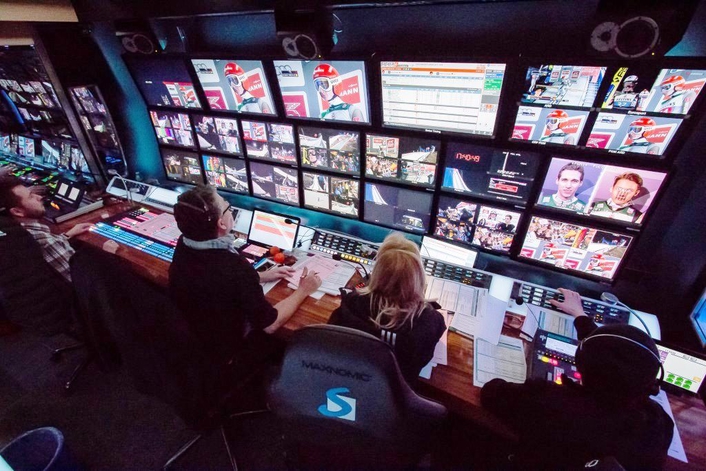 "The Team has to paint the Picture together."

TV Skyline headquartered in Mainz (Germany) was responsible for the live-production. Their OBVan Ü7 was used to produce the world signal. The Ikegami cameras HDC 97A/HDC 970A are characterized by their brilliant pictures especially regarding the ambitious capturing of a floodlighted ski jumping. 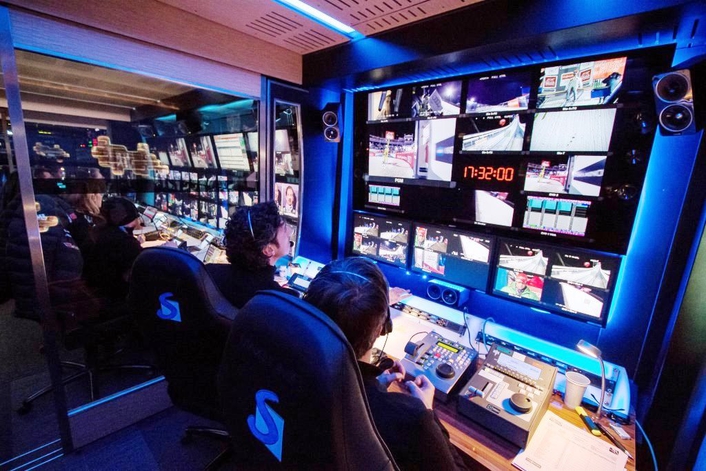 Two of the Camera Positions at the Oberstdorf Event

During the production period from 25 to 29 December 2015 20 people from TV Skyline were on-site, however the cabling for the camera positions took place already before Christmas. 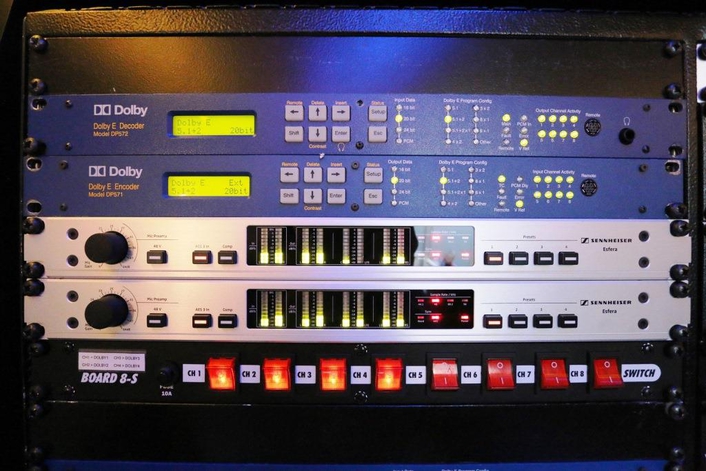 Esfera Installation in the Sound Area of TV Skyline's Ü7 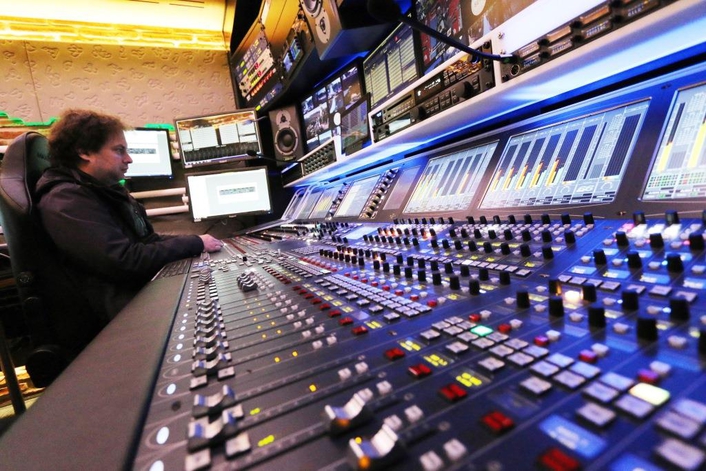 One of the two microphones was installed on the hanging HTTV camera system of Hai TV. It was located central to the outrun to catch the "spectator’s backdrop" optimally and to be able to give the TV viewers the feeling of being in the center of the stadium. 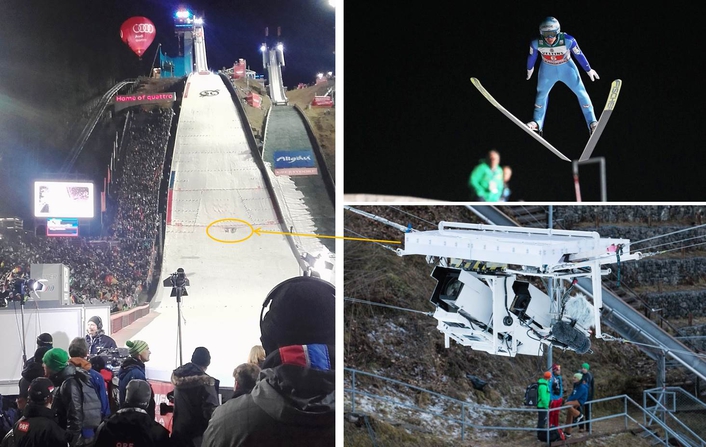 The HTTV Camera System and the ESFERA Microphone

Hai TV’s HTTV camera system
However the real highlight of the broadcast was the HTTV camera system itself: Two cameras were positioned 4 meters high on center position of the athletes landing area. One camera (Grass Valley LDK-86) was equipped with a 86x zoom lens and operated in 6x SuperMotion mode while the other was using a wide angle lens. The cameras were operated remotely via tripod control. For vision control and SloMo control Hai TV delivers a separate operating van. From here the unique image sections for the flight and the landing of the athletes were transferred to the host broadcast OBVan from TV Skyline where director Thomas Strobl was able to include the emotional images of flight and landing into the host broadcast signal. 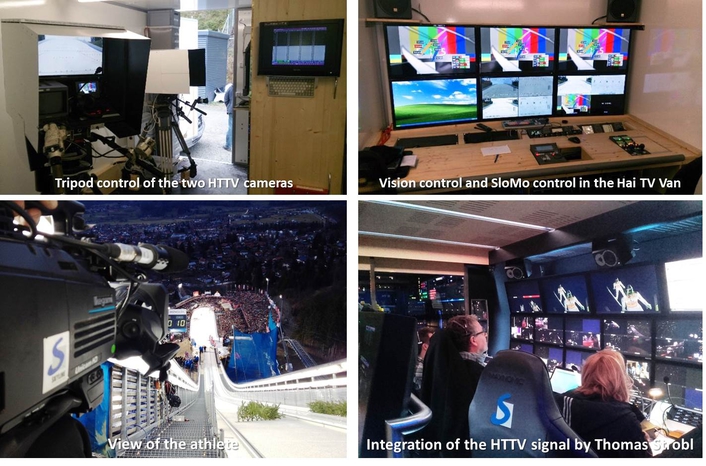