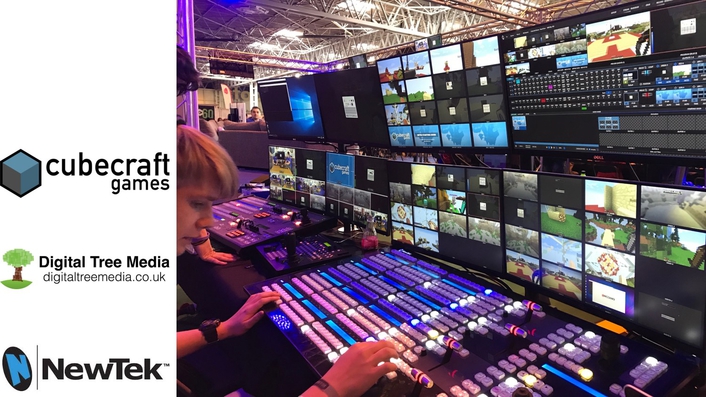 UK-based Digital Tree Media started off as a small media company, serving schools and colleges with basic media requirements. It’s grown to provide progressively larger, event-based productions. One project saw the company producing a two-week long, Olympics-style festival of sport, covering multiple competitions in different remote arenas, using an IP workflow – in 2013, long before most others had attempted live video over a LAN. The company is quite familiar with network delivery of high-traffic, live data streams. Digital Tree Media operates CubeCraft Games, the world’s second-largest server for the world’s most popular online video game, with hundreds of millions of players: Minecraft.

Because of Digital Tree’s impressive presence in the E-sport space, in late March of 2017 the company was approached by event host Multiplay to run the Minecraft Zone for the UK’s largest gaming festival, Insomnia 60.

The Minecraft Zone would be set up as a large networked stand in the NEC (Birmingham, UK’s National Exhibition Centre), with 48 computer workstations grouped across six teams.

Festival-goers could drop into the stand and play Minecraft with other players in a competitive, team-based environment, while E-sport commentators would provide running play-by-play and analysis. Influential gamers known for their YouTube presence would show up for meet-and-greets, and be hustled into the studio for on-camera interviews.

These on-screen and on-camera activities would all be mixed into a centralized program and streamed live; sending the program to large displays throughout the stand and, via the Twitch social gaming video platform, to Digital Tree’s CubeCraft community.

There was a catch: they needed to prepare this live, 44-player video production plus 4 PTZ camera sources, four backup gaming systems, and audio for the 4-day event — with only three and a half weeks to pull it together.

First, Digital Tree had to face the limitations of producing a full live event in a trade-show environment.

They had to work within the confines of the allotted stand area, and ensure that pedestrian traffic comprising tens of thousands of youths could flow between gaming areas and perimeter hallways, while walking among four dozen Windows desktops connected to a video switcher.

Immediately this disqualified SDI. The production needed to be all IP.

Digital Tree decided on the NewTek IP-Series production system. The IP Series supports all-IP (or hybrid IP/SDI) productions, so that rather than run individual hardware cables from video devices and connect them physically from point to point, producers can access any enabled source located on the LAN without requiring a direct hardware input.

For signal transport, the video encoding, commands and communication would all be handled with NDI, NewTek’s IP video protocol. NDI is natively supported by IP Series, and implemented into hundreds of other hardware and software components via a freely available API to enable frame-accurate live video switching over the network, even up to 4K at 60p.

Switching itself was centralized on the IP-Series’ two VMC1 Video Mix Engines, NewTek’s 44-input, hybrid SDI and IP video switchers. Using both Video Mix Engines, the entire show would need to be controlled by one operator per 45-minute segment. Digital Tree added a VMC1 4S control surface, NewTek’s four-stripe control panel connected over-the-network as the operator interface, capable of mixing sources from both. 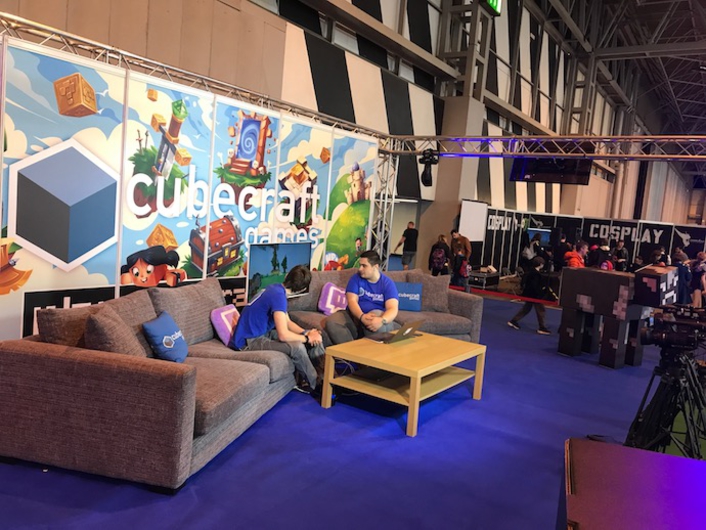 With connectivity simplified and all sources routed over IP, the SDI cabling problem was solved. Digital Tree looked next to the network.

The network had to host CubeCraft’s game traffic in addition to all of the NDI signals going over the same network, so Digital Tree considered one or two 10-Gb connections for the IP Series.

However, since NDI efficiently optimizes video bandwidth on standard Ethernet networks, they didn’t need to invest in overly robust IT gear and ultimately the team brought in a 1-Gb network. They used two 1-Gb connections to link into the IP Series, and one 1-Gb connection for each of the desktop systems.

The final major component of the solution was to grab the full-screen output of the Minecraft desktops, showing each player’s POV during gameplay.

Their initial plan was to use a free NDI scan converter utility; however, once they had the systems up and running, they had to lock each player’s gaming screen permanently into a full-screen takeover and needed more flexibility, so they explored plug-in options. 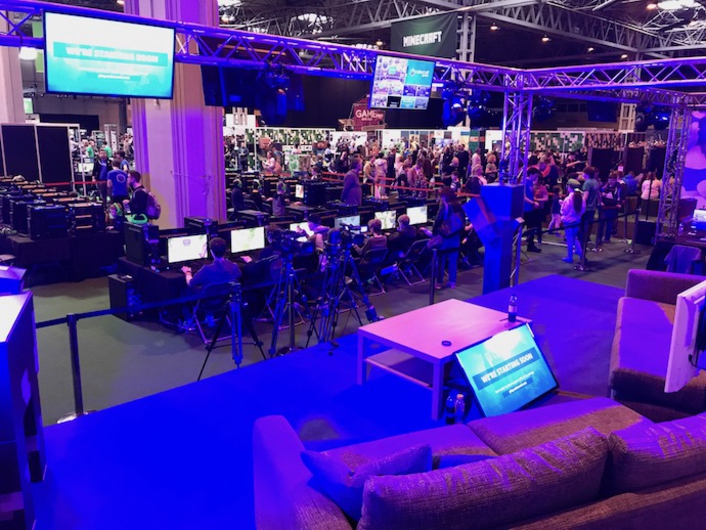 Looking out from the lounge, rows of 48 gaming workstations in the foreground await Minecraft players registering in the background

Thanks to the freely available SDK toolkit made available by NewTek, there’s a growing community of developers and partners creating software that extends the functionality and compatibility of NDI, and Digital Tree found its solution with the free Open Broadcaster Software (OBS) utility.

OBS is used in the gaming industry by thousands of players to capture their games for streaming. Its community members wrote a plugin for OBS to send video game output over the network via NDI, making it available like any other source to the IP Series.

The free availability of NDI development tools was crucial in this deployment, Cole says. “Because of the support of NDI within the development community, our potentially show-stopping hurdle took only 20 minutes to fix.” 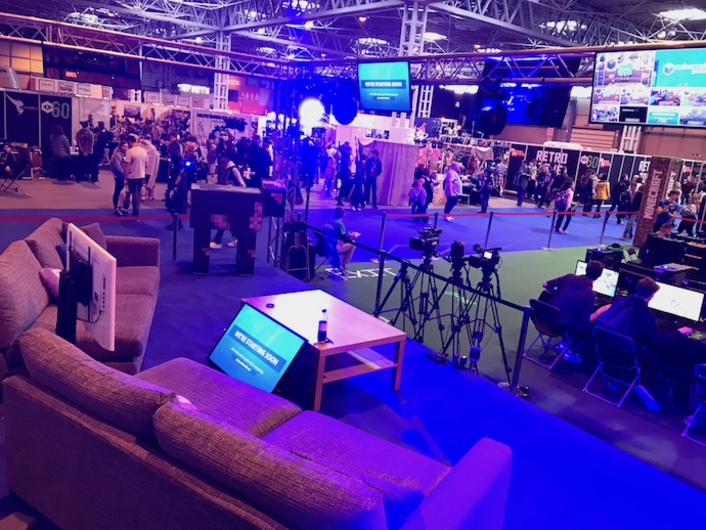 By opening day, Digital Tree had designed and set up an all-IP, live video production that captured and streamed 44 in-person gamers, multiple in-studio cameras, two E-sport commentators, and several fan-favorite YouTubers, and done so in under a month. The constraints were challenging, but the IP Series solution could answer each of them easily.

“It was very easy to set up, and equally easy to use. We plugged the control surface in and connected via DHCP, and that was it. It wasn't a situation where we spent half a day trying to figure out where the connections go. It a case of selecting all of our inputs through the input manager, and it was done,” said Digital Tree’s John Cole. “We just booted it up every morning on the stand. All those IP connections would reconnect, and we were ready to go for another day. It was a very simple set up that just worked for us every day of the event.”

In terms of daily use of the system, Cole says, the NewTek solution made it easy to transition from an SDI workflow to all IP without a hitch. “NewTek’s IP Series was a very smooth learning curve, and more an extension of what we've been using in the past than a complete relearn of a brand-new environment. We have members of staff come and operate it who had never touched a video switcher before.” 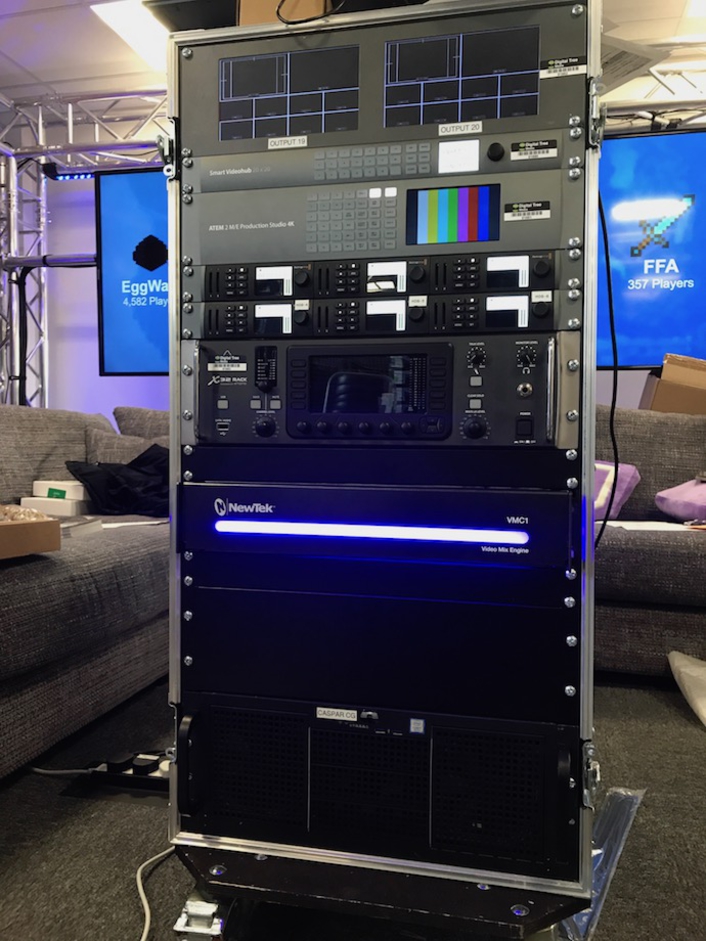 The NewTek IP Series VMC1 in this rack allows up to 44 video inputs, ideal for Esports tournaments

The uncertainty of networking issues, typically a concern for productions this size, was also put to rest. “We never saw saturation through that network,” he says. “Everything ran fine. Games were completely unaffected. Regular NDP requests that Windows would make were completely fine. For our purposes, it was just a normal network that happened to have 44 live streams of video running on top of it.”

Finally, the use of a LAN instead of a traditional video infrastructure was the single biggest difference in terms of getting a large live production designed, set up and running in record speed.

“To take 48 PCs, convert them to SDI and run SDI connectors through traps in the floor and over to our control area, would have been completely ridiculous to do in terms of man hours and the sheer physical amount of cabling. Trying to keep track of all those cables. Making sure they're all labeled properly, and debugging why one cable doesn't work when the other 47 do. Whereas the software-driven IP Series is very flexible in that, if you want another input, you just select it from a dropdown. And it's done.” 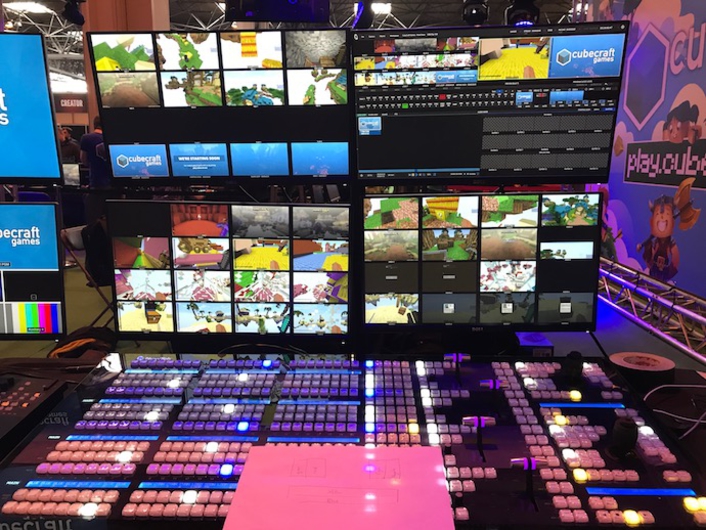 Cole concludes, “There’s no question that the most valuable benefit we saw from the NewTek IP Series is the incredible amount of flexibility that you just would not get from any other switcher.” 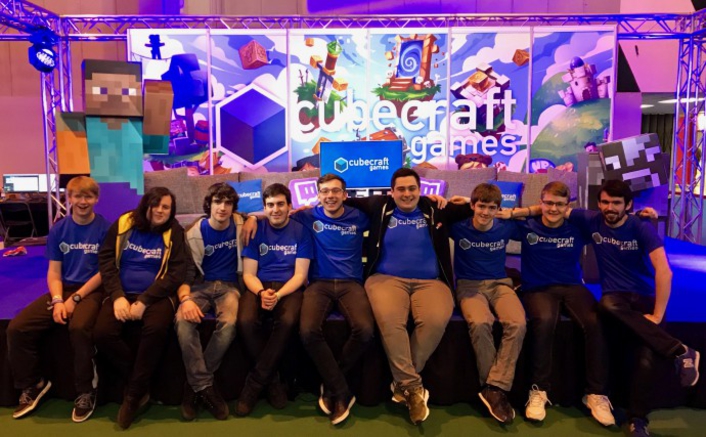 However, the IP Series project shows that these dramatic improvements can be achieved in a way that’s familiar, intuitive, and cost-effective – without the cost of taking on a steep learning curve, abandoning a familiar workflow, or making a large infrastructure and equipment investment.