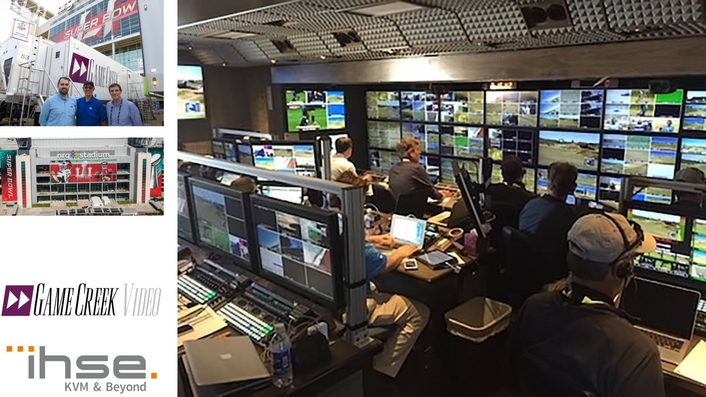 “Game Creek Video has put tremendous effort into revolutionizing how mobile production trucks handle large infrastructure workflow by making KVM a key part of the distribution process,” said Jason Taubman, vice president of design and new technology at Game Creek Video. “IHSE’s Draco tera KVM provided us with the horsepower during The Big Game to finally do what our trucks were conceived to do.”

On game day, Game Creek’s Encore A, B, and C units covered the teams battling for the title in the stadium. Encore is equipped for large-scale production and can handle next-generation production formats such as 4K/UHD. Its three expando trailers provide nearly 2,400 square feet of production space. The A unit holds 25 EVS XT3 servers, each handling up to 12 channels, while the B unit supports up to 24 graphics devices. An IHSE Draco tera enterprise matrix switch in the A unit connects to Draco tera compact switches in both the B and C units using an IHSE matrix grid, which ties all the trucks together as one cascaded, 320-port system. In this way, an EVS operator can sit down at nearly any keyboard-and-monitor workspace within the truck and immediately connect to both the EVS network and to graphics engines.

A similar setup in Game Creek’s PeacockOne A and B units enabled Game Creek to handle pre- and postgame coverage. PeacockOne houses a 160-port Draco tera enterprise matrix switch as the primary KVM, with a Draco tera compact hybrid 32-fiber/48-copper matrix in PeacockOne B. The two KVM matrix systems are united via IHSE’s grid manager, allowing workstations on either unit to access any available server by connecting the workstation to a specific server. 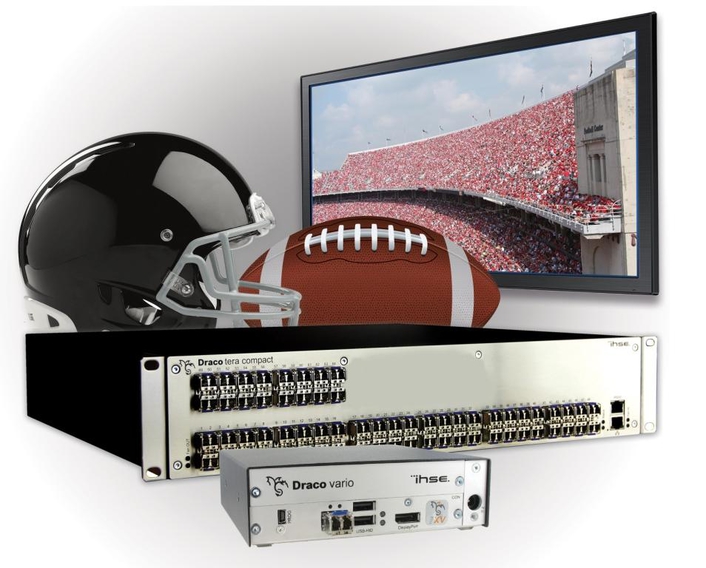 In addition to coverage on game day, Game Creek was involved in other events surrounding The Big Game using other OB trucks. Game Creek’s Edit 1 and 2 provided support for broadcasters during The Big Game; Chesapeake served as the production facility for the Opening Night and Red Carpet festivities; and Nitro A and B covered the awards event the night before the game. Each of those trucks is equipped with a Draco tera compact matrix switch, with A and B units connecting via matrix grid. This gig was only Chesapeake’s third since its recent rollout. Likewise, Nitro had been on the road for less than a month as of Championship weekend.

“After evaluating a number of IP-based KVM switching systems, we determined that IHSE’s Draco tera KVM switcher series hit the sweet spot in terms of price and performance,” Taubman said. “What really attracted us to IHSE was its ability to handle lower resolutions for legacy video and the ability to combine control over both RS-422 machines and keyboard and mouse devices.”

“Game Creek Video raises its own bar for pro football championship coverage with each passing year by continually refining its equipment and processes,” said Dan Holland, marketing manager for IHSE USA. “Being part of the next-generation technology for Game Creek Video’s KVM strategy is a great honor for IHSE. Our line of KVM matrix switchers is one of the best in the industry, and we had confidence our products would perform beyond expectations.”