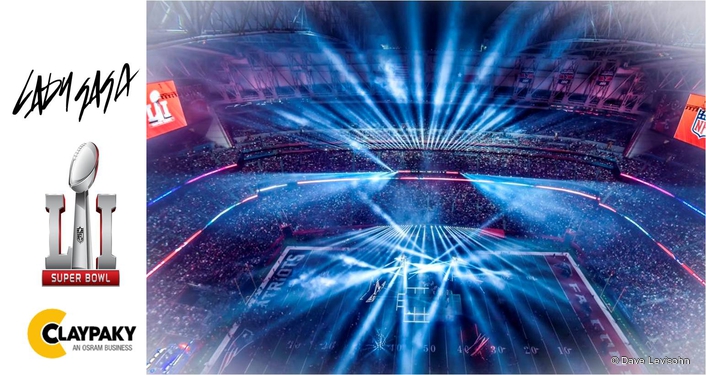 Lighting designer Bob Barnhart, who has lent his talents to 19 Super Bowl Halftime Shows, chose Claypaky Mythos and Sharpy fixtures to help illuminate Lady Gaga in her solo turn at Super Bowl LI at Houston’s NRG Stadium.
Lady Gaga began the Halftime Show with a tribute to America singing “God Bless America” and “This Land is Your Land” on the roof of the stadium.  She performed some dizzying flying effects, crooned a medley of her hits, led high-energy dance routines and closed with a rendition of “Bad Romance” in an action-packed, 12-minute show.

Barnhart first used Claypaky Mythos fixtures on a Super Bowl Halftime Show two years ago with Katy Perry.  This year he employed 56 Mythos on field truss set against the upstage wall below the first row of seats.  The lights were positioned on 2.5-foot spacings from the center of the field out to the 20 yard lines.
“I’ve used Mythos many times since Super Bowl XLIX, including two VMA shows,” says Barnhart.  “They’re a useful tool beyond being a great light; their ability to zoom in and out gives me a lot to work with.  For Lady Gaga we used Mythos with colors, gobos, zooms – I think we used all of its features in 12 minutes.” 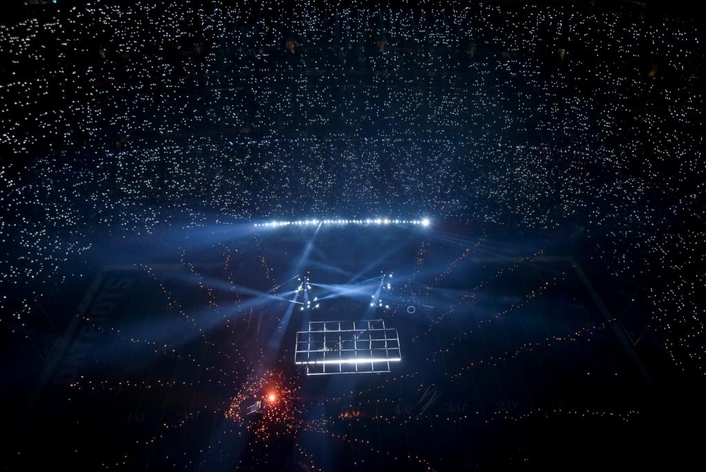 The Mythos fixtures were clearly visible in broadcast coverage of the Halftime Show.  They appeared in the background in close ups of Lady Gaga and the dances routines.  “Mythos gave a good strong dynamic and was fast enough to keep up with the tempo of the music,” Barnhart reports.
He also used 126 Claypaky Sharpys, which were bolted to the fascia on two levels of the upstage side of the stadium from end zone to end zone.  “They gave width and dimension to wide shots so you saw the entire stage and most of the stadium,” says Barnhart.  “They cut through atmosphere and gave the scale and dynamics we’ve come to expect from Sharpys.” 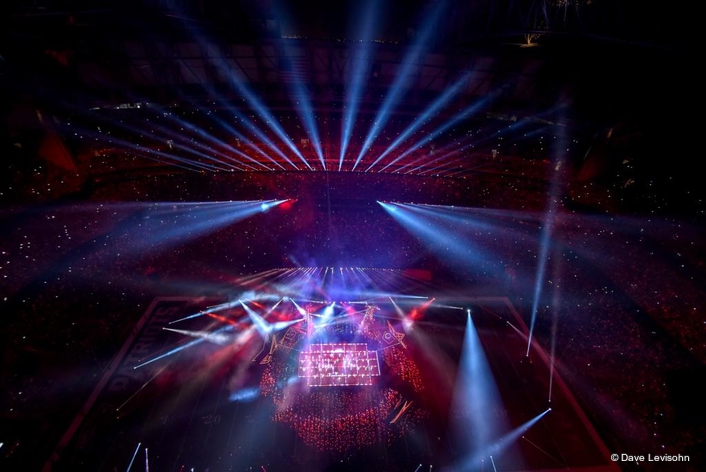 In addition, the compact size of the Sharpys meant they could be bolted to the fascia without interfering with the view of people seated above and below the light levels.
PRG provided all of the Claypaky fixtures.
“As always, A.C.T was very supportive of the Halftime Show,” notes Barnhart.  “A.C.T regularly checks in with us as the show develops in the months leading up to the Super Bowl.”

For the Super Bowl Halftime Show Pete Radice and David Grill were lighting directors, Tony Ward gaffer and Robb Minnotte lead tech.
A.C.T Lighting is the exclusive North American distributor for Claypaky.
Francesco Romagnoli, Claypaky Area Manager for North and Latin America, added, “We’re so proud that Mr. Barnhart has chosen our fixtures year after year for one of the highest-profile televsion events.  This year’s show looked amazing as always!“