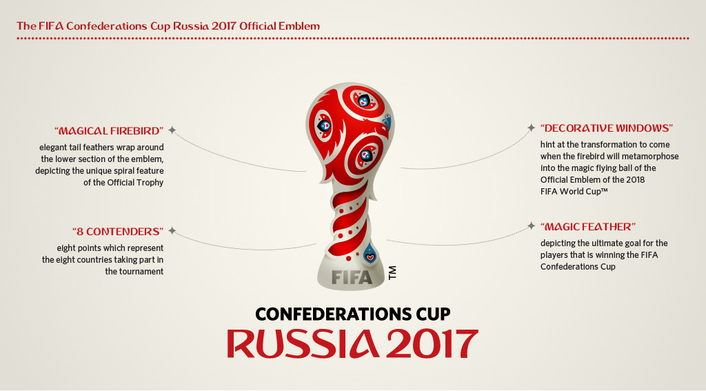 The FIFA Confederations Cup 2017 in Russia is now just 500 days away. To mark this special date, the key visual elements of the tournament often referred to as the "Festival of Champions" have been unveiled in a ceremony held in Moscow. For the first time, the Official Emblem has been inspired by the tournament's coveted trophy, representing the dream of the eight competing teams to hold it aloft in Russia next year.

From 17 June to 2 July 2017, the six continental champions will join the Russian hosts and the 2014 FIFA World Cup™ winners Germany for this star-studded tournament. The FIFA Confederations Cup will take place in Russia for the first time, with the host country and Copa América champions Chile making their debuts in the competition. Australia and Mexico, who won the tournament in 1999, have both already qualified.

"The Official Emblem and look of the tournament were inspired by Russia's rich culture and storytelling tradition. The shape of the trophy inspired the design of the emblem which is brought to life by the mythological firebird, its main character," said FIFA Marketing Director Thierry Weil.

Inspiring the flow of the Official Emblem, the firebird's long tail feathers wrap around the lower section of the emblem while its head, wings and body feature in the spherical top of the shape. "The brand celebrates all of the best qualities of the beautiful game and will enhance not only the tournament, but also the experiences of all who take part," Weil went on to add.

Besides seeing the qualification of two more teams, from the OFC Nations Cup and the UEFA EURO, 2016 will also be an important year for fans looking forward to being part of the FIFA Confederations Cup. The Official Draw for the tournament will take place in Kazan on 26 November, when fans will find out who and in which of the four host cities (Kazan, Moscow, Sochi and Saint Petersburg) their teams will play - except for the African champions, who will be confirmed in February 2017. Ticket sales, however, will start before the end of 2016 with approximately 680,000 tickets available for purchase.

For those wanting to get even closer to the action, applications for the volunteers programme are scheduled to open in the second quarter of 2016 via FIFA.com. In total, there will be around 5,500 volunteers involved in the FIFA Confederations Cup 2017, welcoming thousands of fans from Russia and abroad.