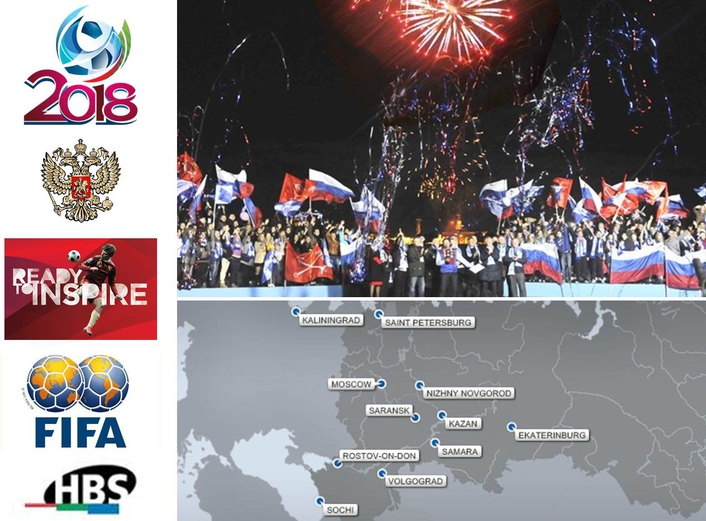 .
While the various stakeholders of the 2014 FIFA World Cup Brazil™ continue to diligently assemble the numerous pieces of the event, over in Russia the Local Organising Committee for the 2018 edition of the event is moving full steam ahead on its own massive jigsaw. During a live broadcast on Russia's Channel One TV, FIFA and the 2018 LOC announced the host cities for the tournament, selected in close cooperation between the two entities based on a number of criteria.

Eleven of the thirteen cities still in contention were chosen: Moscow, Saint Petersburg, Kaliningrad, Nizhny Novgorod, Kazan, Samara, Saransk, Volgograd, Rostov-on-Don, Sochi and Yekaterinburg. Of these, one (Moscow) will include two stadiums, for a total of twelve.

HBS, in its capacity as host broadcaster of both the 2014 and 2018 FIFA World Cups™, is of course paying close attention to developments in Russia and the statement from FIFA President Joseph S. Blatter praising "the speed of preparations for the tournament" and noting that the country is "already one year ahead" of traditional timelines came as music to the company's ears. President Blatter was attending the announcement ceremony as part of his first official 2018 FIFA World Cup™-related visit to the host nation.

LOC Chairman Vitaly Mutko expressed his belief that all of the host cities "broadly represent the cultural and historical diversity of our nation. At the same time, their energetic nature and connection with Russian footballing tradition will allow the FIFA World Cup to leave a powerful and sustainable legacy in all of them.”

The 2018 LOC also released the host city posters for the event the first time this has ever been done simultaneously with the announcement. The ceremony to announce the Host Cities for the 2018 FIFA World Cup Russia™ was watched live right across the country on the evening of Saturday 29 September. People from every one of the 11 Russia 2018 Host Cities were able to take part in the ceremony via live video links. On hand to lend their backing to the cities were governors, mayors, sports stars, leading figures from the arts scene and football fans.

FIFA President Joseph S. Blatter noted: “During the ceremony, I discovered something that was completely new to me. The way people in the cities reacted to the news that they would be hosting the World Cup was just glorious. That’s what football’s about: bringing people together around a common idea and infecting them with enthusiasm.”

St. Petersburg: The flags of all the teams will find their way to us
Russia’s northern capital was the first city to learn it had been included in the list of Host Cities for the FIFA World Cup. Local people gathered to hear the good news on Zayachy Island, which commands views of the city’s main architectural landmarks: the Hermitage and the Winter Palace. As the news was announced, a salvo of festive gunfire rang out across the sky.

In December 2012, representatives and consultants from Arena-2018, along with experts from FIFA's technical group, will be paying inspection visits to the tournament's Host Cities. And the following month, January 2013, they will present their first joint report to FIFA.

"We already have things we can present to FIFA. Five of the stadiums for the tournament are already under construction: Spartak Moscow's arena and the stadiums in Sochi, Kazan, Saransk and St Petersburg," said Botta following the meeting. "In terms of the objectives facing all the people involved in the process, at this stage I would say it's about the Host Cities accepting Arena-2018 as their partner in getting the stadiums ready for the tournament."

“Russia, like any country, has its own construction assessments and procedures,” he continued. “The lines of communication need to be put in place with the cities, and then it will be easier to make sure that the interests of all sides are taken into account, while observing FIFA's timetables and requirements. That's how it was in Germany and in South Africa, that's how we're working at the moment in Brazil, and I'm sure that we'll also be able to do the same in Russia."