When the world’s best cyclists set off on the famous Tour de France, the fans that line up along the roadsides will be joined by many more via the race’s extensive live radio and TV coverage. Produced by EUROMEDIA, this year’s event will make use of a new Lawo-equipped OB truck.

The 102nd edition of the world’s biggest cycling contest will take 22 teams of nine riders – a field of up to 198 starters – over 3,360km of road, through 21 stages in the Netherlands, Belgium and France. After starting in the Dutch city of Utrecht on 4 July 2015, the tour will close in its traditional manner on 26 July, on the Champs-Élysées in Paris.

The new EUROMEDIA OB hybrid production vehicle “C42” supports 10 to 12 cameras, and is designed specifically to meet the demands of sports, variety, games and entertainment production. On the Tour de France, it will co-ordinate all the RF audio feeds before forwarding them to the truck responsible for the international broadcast feed. It is also able to provide an emergency backup in the case of any failure.

The OB will accompany the riders at every stage of the race, with its Lawo V__pro8 video processor unit that will be used for color correction of the video signals received from the motorcycle camera teams. The sound mix will be performed on a 48-fader Lawo mc²56 audio mixing console with a space-saving 7U compact core providing 144 DSP channels and a capacity of 5120 x 5120 crosspoints in redundant operation. Three DALLIS frames – two for use as stageboxes outside the vehicle – will provide the necessary I/O. Overall control of the devices will be assigned to an L-S-B Virtual Studio Manager (VSM) System, managing communication and switching of units from different manufacturers serving a range of functions. 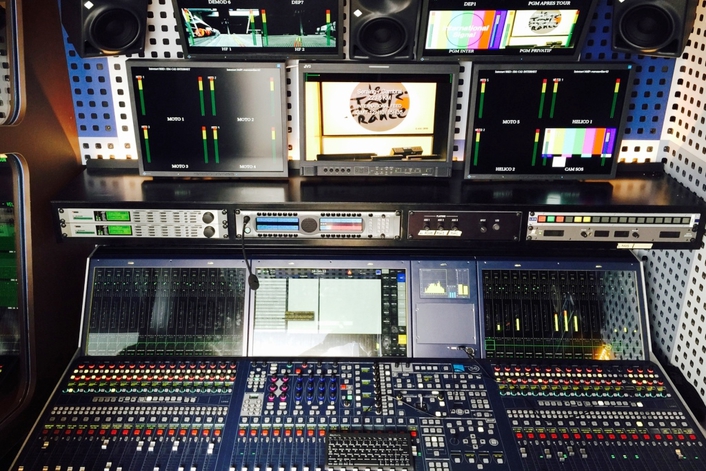 The V__pro8 is a compact high-performance video processor that allows eight video channels to be used freely with 384 audio channels. It offers cross-format conversion, color correction and embedding and de-embedding, using protocols including 3G-SDI, MADI and RAVENNA, under easy touch operation. The V__pro8 combines a number of different tasks in one tool, guaranteeing maximum efficiency and greatest operating safety at significant lower cost than alternative solutions.