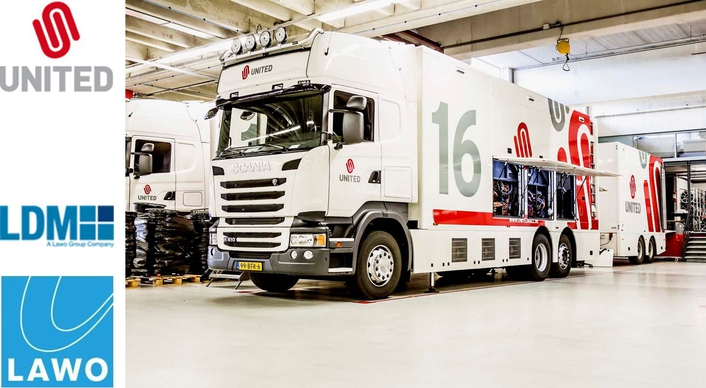 .
Dutch outside broadcast service provider United, headquartered in Hilversum/The Netherlands, has installed a Lawo mc²56 audio mixing console as the centerpiece of its new OB16 truck. The move sees the company follow a series of other broadcasters and production companies operating multi-camera outside broadcast (OB) and studio services in adopting Lawo technology, giving Lawo’s mc² consoles a 70% share of OB vehicle operations in the European market. Local distributor, LDM Audiovisual Systems, based in Lint/Belgium, made the delivery and has carried out the console configuration for United.

The desk’s core is housed in its own rack and integrates its own DSP with a Nova73 compact core, which is also a large audio router – making the audio mixing console is a very advanced system controller. The router is equipped with MADI, allowing the simultaneous transfer of up to 64 audio channels over a single fiber-optic link. This signal capacity has reduced the wiring that would otherwise be required in the vehicle, and eliminated much of the conventional assembly and soldering. 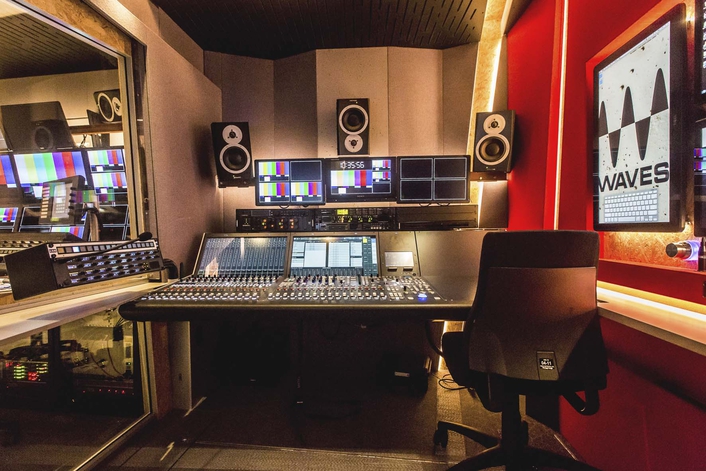 The truck’s intercom system is connected to the Lawo audio distribution architecture via MADI, providing high-quality audio throughout. In addition to the mc²56 consoles, LDM installed L-S-B’s Virtual Studio Manager (VSM) in OB16. This software provides overall control for central automation of all systems in the vehicle, integrating the video, audio and intercom router, and also the multi-viewer. The operators at the 15 different workplaces can select their specific visualization. The system’s buttons are LCDs that dynamically display signal labels – with the VSM control system, these can be set, saved and recalled for any situation eg. changing the order of the cameras. Previously, this required changing the setup and re-configuration, plus re-naming the tally signals. Now this can be programmed centrally, making the workstations very flexible. Even though the vehicle is with United LSM could, if required, configure the system from any location.

The digital infrastructure of the unit provides a high degree of flexibility, required less cabling and offers many more possibilities than a ‘conventional’ setup. This means that productions that used to require several days of preparation and rehearsal can now be scheduled tightly, and completed in a single day. This required a different approach and interior design of the vehicle.

LDM also supplied its new Lawo V_pro8 video processing and routing unit for the installation. The V_pro8 has eight 3G HD-SDI video embedders and eight processors, and sample rate-converters, as well as an 8x8 matrix with extensive video processing capabilities.

United provides full-service broadcast facilities and ranks among the top three largest service providers in the Netherlands. It operates several TV OB vans, ranging from small vehicles to a large satellite OB van, capable of 30-camera production. The camera department produces major sporting events, and has worked on football events including the European Championships and World Cups, the Olympic Games, game shows, music concerts and other live events to be mastered by multicam.

United
United, which is housed in the Music Pavilion in the Media Park in Hilversum, is a full service organisation in the field of facilities, and technical and creative support for media and broadcast organisations. United offers a wide range of facilities and services. The company is part of the Euro Media Group (EMG). This allows to combine forces with other subsidiaries, exchange knowledge and experience, and operate flexibly and effectively at a national and international level. In addition, this gives customers access to a very wide range of possible facilities, services and solutions.

LDM Audiovisual Systems
LDM Audiovisual Systems is a young and dynamic company aiming to be the local single point of contact for Lawo, L-S-B and DirectOut Technologies.
With its office based in Lint, near Antwerp in Belgium, the company has found a central location from which the LDM team provides commercial solutions and technical services for professional audio and video equipment of Lawo, LSB and DirectOut Technologies for the Belgian, Dutch and Luxembourg market.