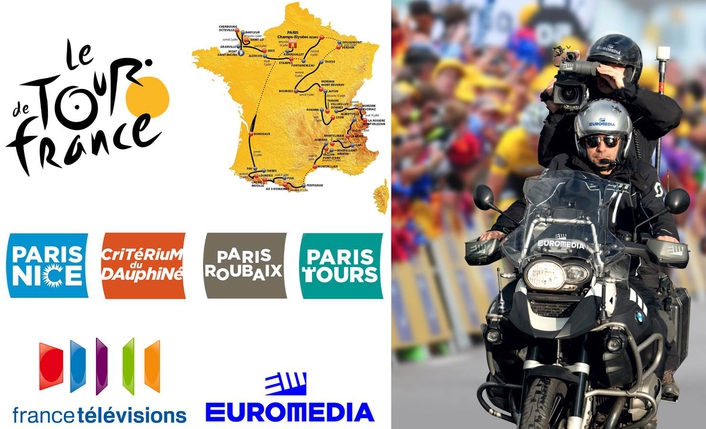 Following an open call for tender, France Télévisions has renewed its trust in EUROMEDIA for the provision of RF (Radio Frequency) means that will be used to cover a large part of the cycling races broadcast by the public group for the period 2016-2020.

For the next five years, EUROMEDIA will therefore continue to draw upon its technical and human resources in order to provide France Télévisions with the necessary RF means to cover the largest cycling event in the world, the Tour de France, as well as the Paris-Nice, Critérium du Dauphiné, Paris-Roubaix and Paris-Tours cycling races.

The decision taken by France Télévisions reflects EUROMEDIA’s renowned expertise and technological developments in RF (wireless) broadcasting since many years, in partnership notably with France Télévisions and Amaury Organisation (ASO), organisers of the above-mentioned races.

EUROMEDIA will provide France Télévisions with all of its expertise consisting of:
- Decades of accumulated experience and know-how that will guarantee top of the range services for France Télévisions, who produce the feed on behalf of ASO, and in accordance with France Télévisions’ high standards of live RF broadcasts set from the start.

- A team of permanent staff with internationally recognised expertise guaranteeing a culture of excellence when it comes to handling the coverage of complex events.

- Specifically designed tools for this type of production. EUROMEDIA has always supported its clients by developing and investing regularly in innovative technology and equipment with ever-increasing performance. In 2015 a new OB truck (the C42) and new cameras (acquisition of the first Sony HDC-4300 camera) made their debut at the Tour de France finishing line.

- A Research and Development unit that guarantees the development of leading-edge equipment. Thanks to Livetools Technology headed by Luc Geoffroy and part of the EUROMEDIA that develops and manufactures its own transmission links, EUROMEDIA was able to work in close collaboration with France Télévisions to develop a whole range of high tech products.

Jean-Maurice OOGHE, production director of the Tour de France for France Télévisions expressed his satisfaction and said: «Congratulations to the RF crews of EUROMEDIA. For many years I have appreciated their deep knowledge and expertise. Filming the Tour is always such a challenge. Innovation is the key. The next five years are going to be very exciting! »

Lionel VIALANEIX, Chairman of EUROMEDIA added: « Together with France Télévisions and ASO we have continued to develop and enrich the coverage of cycling races in general and the Tour de France in particular. The broadcasting quality for the Tour sets an example worldwide. True to the goals we fixed together, the next five years of the renewed collaboration with France Télévisions consolidates our technical leadership and expertise and means we will continue working together in terms of research and development for the future coverage of cycling races on television as well as other screens.»

ABOUT EUROMEDIA
In Europe and Internationally, EUROMEDIA covers all technical aspects of the production process, from filming through to broadcasting. Thanks to its expertise and extensive resources, EUROMEDIA has the capacity to broadcast daily sporting events, shows and TV programmes. EUROMEDIA is constantly working on broadening its technical innovations know-how in order to assist its clients in creating the television experience of the future