On Tour with EMF

.
The 2012 Tour de France is the 99th edition. It began in the city of Liège in Belgium on 30 June, and is scheduled to end on the Champs-Elysées in Paris on 22 July. Besides Belgium and France, the Tour will also pass through Switzerland. The route features a total of 101.1 km covered in individual time trials and only three uphill finishes: La Planche des Belles Filles (stage 7), La Toussuire - Les Sybelles (stage 11) and Peyragudes (stage 17). 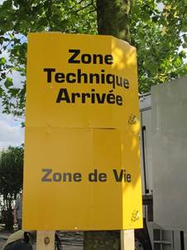 Today, it is the kick-off for the 99th Tour De France which will take the racers to Paris on 22nd July after a journey of 3,497km. Like every year, Euro Media France is taking part in this summer sporting saga to produce images of the race for ASO (Amaury Sport Organisation) and for France Télévisions. This year, 21 stages are not only awaiting the cyclists but also the technical teams; this is an opportunity for us to show you a daily image behind the scenes of the Tour de France, because, during the 3 weeks for 86 EMF technicians on the Tour, the technical area will really be their living area!

Day 2: A ‘Tour de Force’ broadcast throughout the world 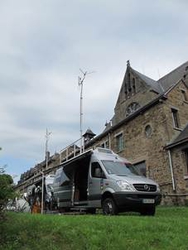 After a time trial in Liège yesterday, the Tour de France started in the Walloon capital to finish in Seraing today. These were images watched by 12 million viewers the world over.
Broadcast in more than 190 countries, the Tour de France has become an un-missable international event. From the Salomon Islands to Kosovo, the images produced by Euro Media France boost average audiences on French and international channels.
These images from the TOUR de France that are doing a TOUR of the world are truly a technical TOUR de force!

Day 3: Visit from the King of Belgium to the technical area 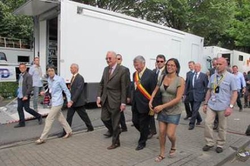 The Euro Media France teams had the honour of welcoming the King of Belgium Albert II to the TV Compound for a visit to the technical area!

Day 4: Our own Tour de France 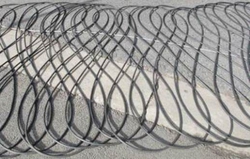 July is a month for bicycle lovers. So that the broadcasting is perfect and that bike lovers the world over are continuously on the edge of their seats, the Euro Media France teams knuckle down each day to unwind, pull, install, coil and then wind up again all of the cables before moving on to the next stage. 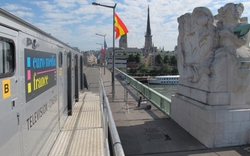 The EMF teams are always on the bridge to film the images of the Tour de France: today, the editing truck (truck 19) composed of 6 post-production units, was literally on the bridge, facing Rouen cathedral (a town which has 100 bell towers, 50 of which are classed as ‘historical monuments’).

Day 6: A partner in all weathers 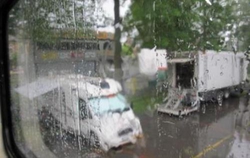 The rain falling today will not stop the Euro Media France teams in covering the Rouen/St Quentin stage. 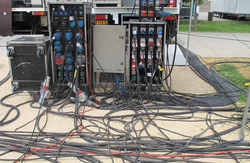 The Tour de France sucks up energy like a sponge and without Lumex, which powers the OB trucks with several generators; we would not be able to provide images to the TV channels.
Thank you to the Lumex technicians who ‘connected’ throughout the year for numerous TV events.

On Saturday 7th July, the climbers and the technical teams covering the Tour for the first time with Mpeg 4 attacked the first mountain stage under a glorious blue sky.

An essential element for technical operations, OB Truck HF14 was also used for the Franco-Swiss stage of the ‘ballon d’Alsace’ (between Belfort and Porrentruy) which saw the youngest cyclist in the pack (Frenchman Thibaut Pinot) win the race.
This truck was responsible for the intermediary reception of signals, and to then retransmit these for the first two hours of the race.

Day 10: EMF strolls along the Saône

On Monday 9th July, the cyclists and the technical teams were resting in the Bourguignon city of Mâcon, an occasion for us to show you a photo of the helicopter relay.
The helicopter-relay is coupled with an image helicopter (both belonging to partner company ‘Hélicoptère de France’). Equipped with 2 cameras (one with a wide angle, the other with a longer focus), the image helicopter filmed images from the sky for a live broadcast.
Like a bike driver and the cameraman, the partnership between the cameraman and the helicopter pilot is based on close complicity and talent, recognised the world over. 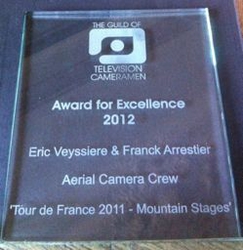 Each year, the RF equipment from EMF offers increasingly captivating images, and shows of its technical feats and exploits. Having received the technological excellence prize from Sports Video Group for the Tour de France in 2007, the Guilde of Television Cameramen have just awarded the “Award of Excellence 2012” for the helicopter images on the Tour de France produced last year by the duo Eric Veyssière and Franck Arrestier.
A big well done for these two and more generally speaking to all of the cameramen who have helped to show images of France and its borders. 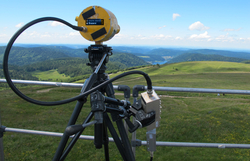 The photo of the day is one of the Hertzian satellites for the reception of the images from the plane which was flying overhead the race, in particular “le grand colombier”, a scary thought for all racers, as this mountain is reputed to be one of the hardest in France. 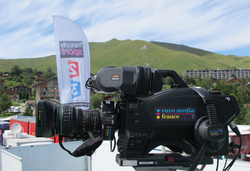 In Toussuire, the cameras took in deep breaths of the fresh mountain air, because today was one of the shortest stages but also one of the toughest for this 99th Tour de France.

Friday the 13th is a day associated with superstition in certain cultures, which is unlucky for some and lucky for others.
On this long 226km stage, the EMF teams were working alongside the visitors who did not hinder the broadcasting in any way!

Day 15: Arrival at the Mediterranean coast

Another long stage where the EMF teams could see the pack reach the Mediterranean Sea from the monitoring of the Nodal.
For this 15th day, the finish line was in the seaside resort of Cap d’Agde.

Day 16: A great escape to the Pyrenees 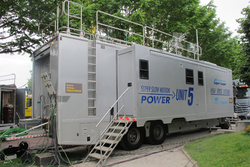 The OB truck DVS5, usually used for slow motion and super slow motion filming, is housing the Nodal and the Vidéothèque of the Tour de France for France Télévisions for the whole month of July.
This Sunday, the truck is installed in the Pyrenees where the 14th stage took place, and in places reaches gradients of 18%. 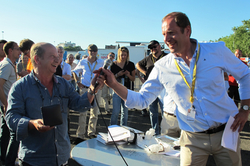 Gérard Choucroun was given the ‘médaille des 20 ans’ (20 year medal) by Christian Prudhomme, director of ASO, as a reward for his loyalty to the Tour de France.
RF production director for Euro Media France, Gérard Choucroun already has 23 Tours de France on his clock.
Since 2003, he has managed hundreds of technicians (cameramen, pilots and drivers) during the month of competition.
Every morning he leads a technical briefing for the teams and coordinates the RF equipment in order to provide smooth live broadcasting with an optimal image quality.
On Sunday, he will complete his last Tour de France before passing the torch to Audrey Delsarte, who has been assisting him already.

Day 18: behind the scenes of a victory

The Frenchman Thomas Voeckler dominated and won the 16th stage of the Tour de France.
On arrival, the cyclist for Europcar was at the Euro Media stand to explain the course across the Pyrenean mountain passes which earned him the polka dot jersey for the best climber. 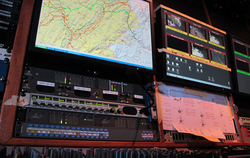 On board HF14, which coordinates the aerial equipment, software controls the altitudes of the plane and the helicopters and adapts them if necessary.
On the left, you can see the route of the stage and on the right the images received live.

Day 20: Arrival at the plateau

A short but very tough stage is the day starting from Bagnères de Luchon to the plateau of Peyragudes.
This photo is an early morning view, a great time to admire the view from the technical area of this ski station in the Hautes Pyrenees.

Off-screen for the cameras, but in the fields instead, these 4 satellite dishes relay, by Hertzian waves, images from the finish line from a crane mounted camera set at 30m above ground.
Amongst the 4 dishes, one manages the sound and another the sound play-back from the orders of the director.

The dream team for editing, Nodal, Eurovision all together after 3 weeks of races and the day before the arrival of the cyclists on the Champs Elysées: in good shape!

One week after the 14th July parade along the Champs Elysées, the Euro Media France teams once again set up their cameras on the most beautiful avenue in the world, for a long awaited arrival after 23 days of racing!
A fabulous team effort, marvellous images, and a quality of broadcasting always using the best technology…
Thank you to all of the teams of technicians who worked during the month of July to bring the passion of cycling to life for millions of viewers worldwide.
And a very big thank you to our 2 reporters/photographers Sophie Moulin and Philippe Jugnot who showed us behind the scenes of the Tour de France 2012.
Join us next year for the 100th Tour de France!