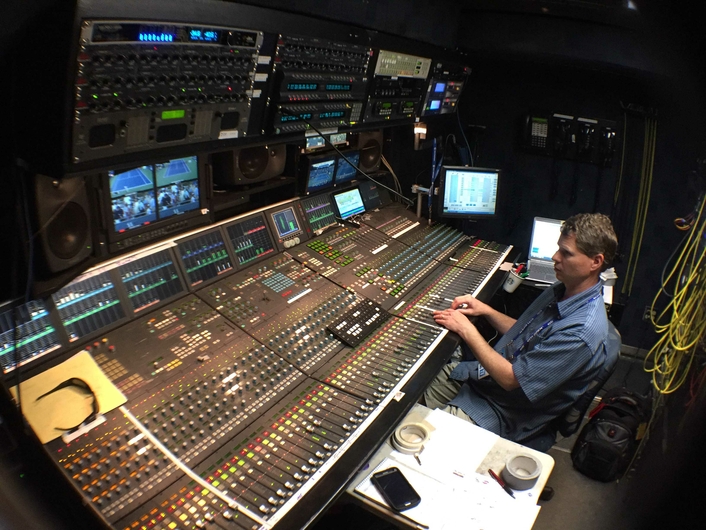 Q: What’s your current role and what does it involve?

A: I’m a freelance audio engineer and mixer, mainly working as an A1 on college sports for ESPN, though I’ve worked for many of the networks as well as other clients over my career. The majority of what I do is football, basketball, baseball and studio productions. I’ve also done the occasional high-profile non-sports event, including important political broadcasts. For instance, one highlight was my role as Head of Broadcast Audio for the 2013 George W. Bush Presidential Center Dedication Ceremony; with every living US President in attendance, it was a memorable event. I also do some work as location production sound mixing.

Q: How did you get into broadcast sound?

A: It all started at my church, when I was 14 years old. I was interested in the AV side and the head of the church AV (who was also a remote truck A2 at the time) added me to the volunteer crew. As it turned out, I had a knack for broadcast production. So, I got involved in everything from cameras to sound. I steered myself towards sound as I found it to be the most interesting.

After that, I secured some corporate work outside of the church. In college, I worked as an A2 on various events. After college, I started to get hired more and eventually moved into A1 roles. The A1 side really took off when ESPNU came online in 2005. The truck A1 role accounts for about 85-percent of my income now. ESPN has been a great client over the years, providing many opportunities to learn and grow.

Q: What was one of your most prominent experiences with Calrec?

The first time I worked on a Calrec Apollo was during the 2012 NATO Summit. In typical Calrec fashion, the console quickly revealed its flexibility and usefulness and showcased that they had significant resources and processing power. We had a multitude of paths coming in and out for a minimum of four languages, simultaneously. The flexibility of the platform, such as splitting the console, cloning faders and assigning VCAs, along with other features, made the project very easy to manage.

Q: How has the general approach to sports broadcast changed over your time at the console?

A: The amount of programming for college sports has grown tremendously. The delivery platforms have multiplied, too, with mobile phones and other digital devices added to the more traditional cable services. But, as delivery increases, the number of on-location production people continues to decrease. There’s still always an audio person, but you won’t always have the production or graphics teams.

On the production side, we’re consistently being asked to manage more in less time. We’re doing a lot more in terms of routing multiple audio paths, in addition to adapting the way intercoms are used between the remote location and the production control rooms. Every event and location is different, so every production must be set up and torn down. Luckily, I am typically on a Calrec, so I’m not concerned about set up time at the console. Calrec consoles are never part of my traffic-jam ─ that’s not where my time gets eaten up. There are many parts of the production that must be set up in addition to the console, including transmission and intercoms. Most of the time, Calrec is actually the solution to a problem. I know it’s going to do what it’s meant to do; it’s going to work. 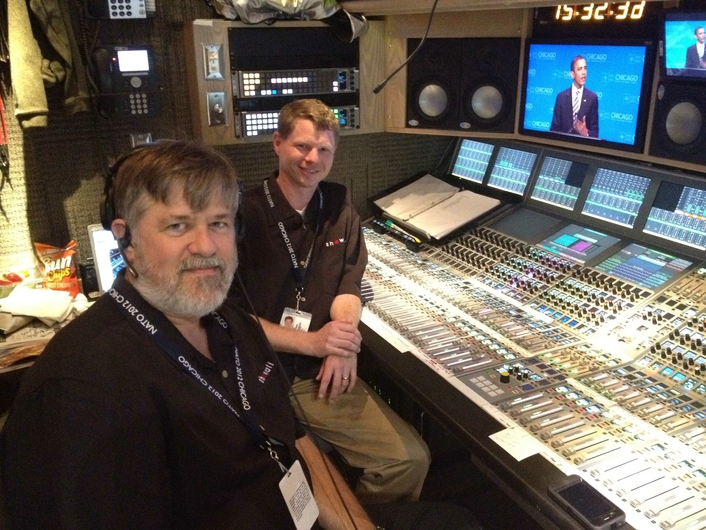 Q: And channel count has got bigger too, hasn’t it?

A: Definitely; it’s not unusual to be handling hundreds of paths at once now. For instance, in July, I was on a Calrec Artemis and we had three shows on three different networks ─ ESPN, ESPN2 and SECN. All three shows were passing through that one board, simultaneously.

The mix of sources is constantly changing, too. We’ll get multiple formats of signals coming in: analog, AES, MADI, Dante, etc. ─ and those all vary in width. Some are mono or stereo, while others are surround sound or newer formats, such as Dolby Atmos. I know that Calrec can handle all of those.

Calrec’s previous digital line, the Alpha series, was great, and those consoles (Alpha, Sigma, Omega, etc.) are still working solid on many events. When the Apollo and the Artemis first came out, I remember staring in wonder at the massive amount of power and flexibility ─ especially the number of channels and paths they could handle. I was skeptical that we’d ever need that kind of power, but here we are. Honestly, now, when I’m not on a console with that sort of power and flexibility, I feel like my hands are tied together.

Q: How do you approach a ‘standard’ sports broadcast?

A: I’m normally on a different truck every day, so there’s no default set-up on the console for me. Some trucks have a generic default, but I prefer to start from a completely blank desk. So, when it’s my first time sitting down to a console that I haven’t previously been on, erasing its surface is my first step.

Thankfully, Calrec consoles are very easy and efficient to set up; it’s very straightforward and fast to rebuild it to my liking. As the project grows, it is easy to add or reallocate resources and rearrange the surface as needed ─ which is a huge advantage since every project is different and unique.

Q: How much automation to use?

A: I use the built-in auto mixers for announcers, which is a really useful form of production automation, but live sports shows are all unscripted. Nobody knows if there’s going to be an interception or an injury or touchdown, so I don’t use the automation in the traditional sense.  I might go to a commercial break in 30 seconds or in 10 minutes, depending on the play of the game ─ so, besides using a few tallies to open auto-faders, live sports production does not lend itself to being automated.

Q: What is it about Calrec Consoles that makes them stand out from the crowd?

A: They’re extremely versatile, powerful, flexible and robust, and the metering… the metering is phenomenal. That’s one thing I miss most when I work on anything else: I always think, “where are my meters? I need more meters!”

The flexibility of re-arranging the console on the fly, if I need to, is particularly helpful ─ and I don’t think I’ve ever had one lock up or fail on me on-air. If you want to move faders from one side of the console to the other end, you go over to the screen, click, drag and it’s done. On some other consoles that’s either impossible, or it seems like a 30-step process.

I’ve been using Calrec for the majority of my work as an A1, and I remember being excited the first time I got to use one. Something I like about Calrec as a company is that it listens not only to the vendors, but to the end users as well. Calrec always does everything it can to help make its products most usable for its customers; that probably contributes to them being the market leader.

Q: How do you think sports broadcast will develop in the near future?

A: Though we’re already strongly shifting toward viewing content on mobile devices, I certainly see people watching live sports content in even more places. It’s going further all the time.

With things like Dolby Atmos taking centerstage, immersive audio is being talked about more and more, especially with the broadcast consumer. The new generation of sound bars are amazing. They can throw the sound at the ceiling and use controlled reflections to give you virtual immersive environments. The average viewer doesn’t have to grapple with complicated surround set-ups anymore, so I think we’ll see demand for next generation audio grow faster and faster.

We will also see 4K continue to grow. It’s been a little slow at first, but I think the viewers will begin to appreciate the amazing picture as more content becomes available, whether that’s post-produced content or live events. And they’ll want to have amazing sound with it, because we already have the technology in place to help make that happen, from capture to delivery.

For more than 50 years the world's most successful broadcasters have relied on Calrec. They still do. As our industry adapts to new viewing habits and evolving commercial environments, Calrec is helping broadcasters to stay ahead as they switch to IP infrastructures; to achieve efficiency with remote broadcasting; to save money with virtualised production. Calrec’s radio-focussed and flexible Type R can adapt to a variety of requirements including headless, and Calrec has expanded its range of consoles, from the cost-effective Brio consoles, to the IP-enabled ImPulse core. For flexible working, integrated networks and reliable audio, Calrec has it covered. More information at calrec.com