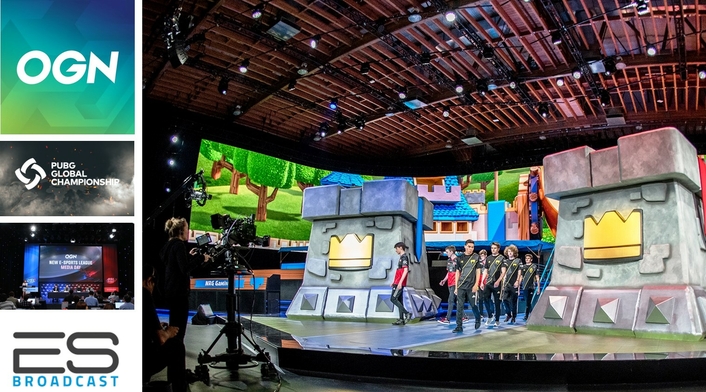 ES Broadcast technical director Jonathan Lyth outlines how his company designed, specified and built the backend video and audio infrastructure for the OGN Super Arena in California, discussing the challenges faced and sharing the lessons learnt along the way. It’s hard to overestimate the impact that eSports is having on the video games market. Indeed, the impact is being felt across the entertainment sector with the scale of competitive playing, the level of sponsorship and the associated prize money impossible to ignore.

Then there’s the plethora of Twitch TV and YouTube influencers. According to a recent report by DataReportal, almost one billion people around the world have watched eSports, with 22 per cent of internet users saying that they have watched an online tournament in recent months, with audiences growing by 50 per cent in the past year.

” There was a learning curve for ES Broadcast with this installation; you can’t simply impose broadcast workflows.” 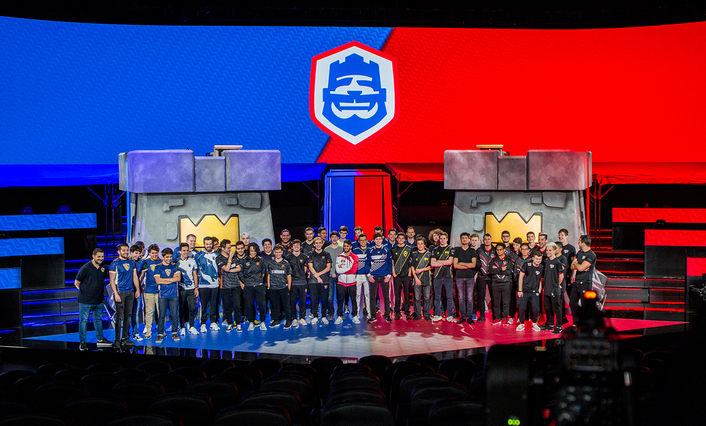 OGN is an eSports network and content producer based in South Korea and has a long-established reputation in the field. 2018 saw the initiation of a new project by OGN: the 35,000-square-foot OGN Super Arena in Manhattan Beach, California. It’s specifically designed for Battle Royale eSports games like Fortnite and PlayerUnknown’s Battlegrounds (PUBG). 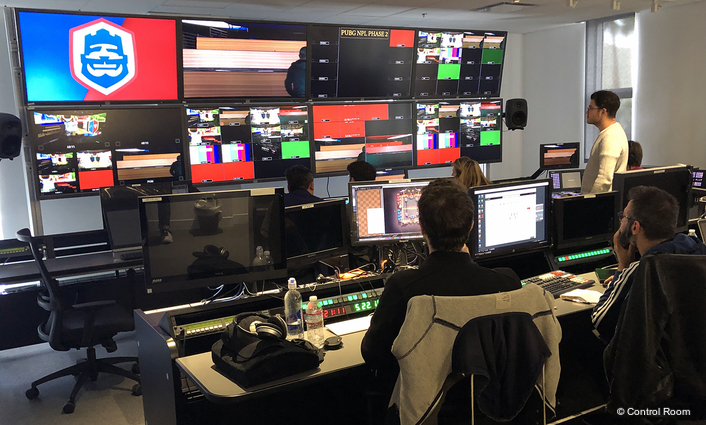 ES Broadcast was initially contacted about this project at NAB 2018. OGN has a longstanding relationship with systems integrator De Tune Company and had worked on several projects with them. De Tune already had previously worked with ES Broadcast for their equipment hire needs, and so turned to us as a key partner on this systems integration project.

In essence, we worked with them to design, specify and build the backend video and audio infrastructure, while De Tune also focussed on the complex and very impressive front-of-house systems. This includes an Astro Spatial Audio 3D surround system.

Having met with the key people involved at NAB 2018, we then set about designing the system.

One of the key requirements was that it had to be designed and built as a modular system, allowing it to be moved from venue to venue if required. A second key point, one that we had to learn and adapt to, was that this wasn’t a broadcast install. 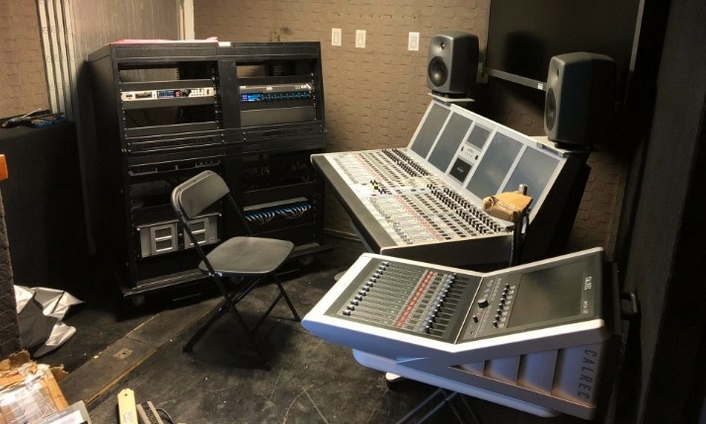 While it may feature much of the same technology, the way that it’s being used, particularly the sheer number of I/Os in relation to the small technology footprint, is quite something else. OGN – along with other eSports providers – also sometimes thinks differently as to how a particular piece of kit can be used compared to more traditional workflows. 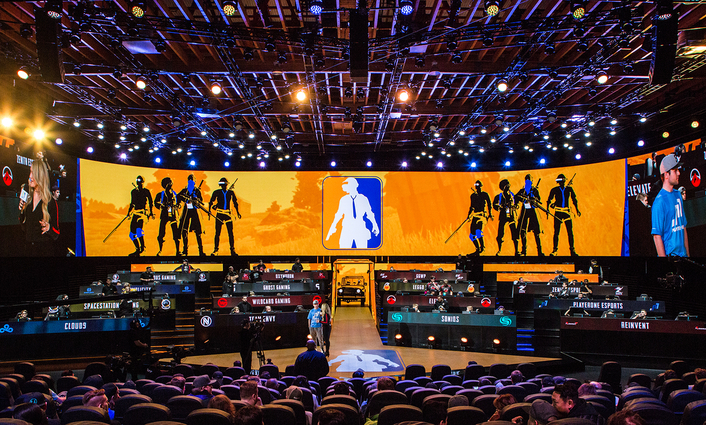 We went through the suggested kit list and made significant changes to it. On the video side we selected key technology from Sony, EVS, Evertz, Ross, Adobe, Elements and TSL. When it came to specifying the audio requirements, ES Broadcast had worked with Calrec on several other projects and so we have a good understanding of the flexibility of Calrec audio consoles in combination with its Hydra2 networking technology – not to forget the sound quality and mixing options available. 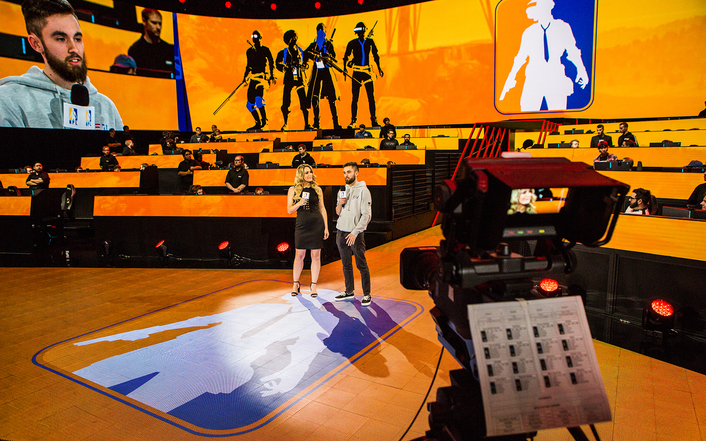 Bearing in mind the levels of audio complexity eSports demands, it made sense to specify an Artemis console as well as a Brio, which is now used for front-of-house (FOH). Of course, we deployed the Calrec Hyrda2 network too.

Once formalised, we then built and tested the system in the UK and we also completed the furniture design and layout for the building. We worked closely with De Tune throughout the whole process as they have a huge amount of eSports experience. 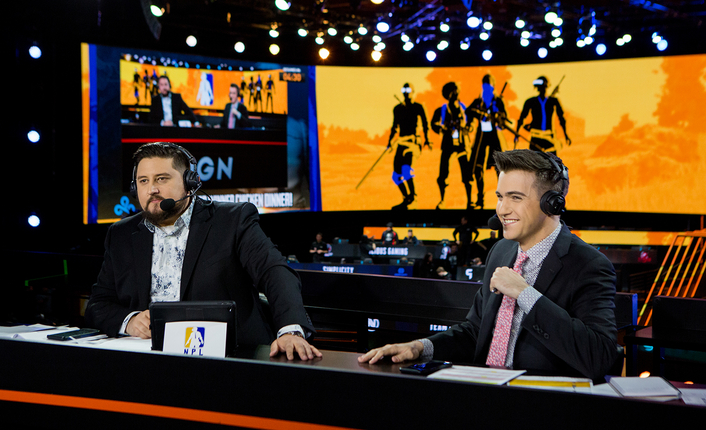 Once we were happy with the testing we did in the UK, the equipment was shipped to LA and as the control areas for the arena were still under construction (despite the arena opening in December 2018), the system was initially installed in an OB unit, with De Tune completing the final move into the building in April 2019.

“The audio workflow changes depending on the type of event but with eSports, and certainly with Battle Royale events, there’s always a high level of complexity involved, requiring both high capacity and flexibility of setup.”

In addition, De Tune installed an NDI network for collecting game screen and POV camera content for use with in-venue coverage, driving the huge wraparound screen, desk and floor LED display. This system also allows the host “broadcaster” to convert some of these feeds for use in their own output.

As mentioned, because this venue – at the time the largest fixed eSports technology install globally – is designed to handle huge multiplayer events, it’s the way that the technology is used in terms of the volume of feeds that really stands out. It’s a bit like covering two major, non-virtual, sports events at the same time, for many hours at once – again, not something you see every day.

Taking the example of an 80-player Battle Royale event, there are 10 full system cameras, though there’s capacity for a little more. Then there are 20 team cameras, which are concentrated on the team captain and team members down the line. At the end of each of the 20-team desks there’s an SDI mini-cam.

There’s a primary vision mixer (Sony XVS-7000X) which is fed by the 10 system cameras, sub-mix outputs, replay, graphics and VR. We then have one sub-mix handling the selection of feeds from the 20 team cameras (POV) and then feeding that into the main mix. Via the NDI layer, there are feeds from every gamer’s screen and every gamer’s webcam, which gives another 160 sources. 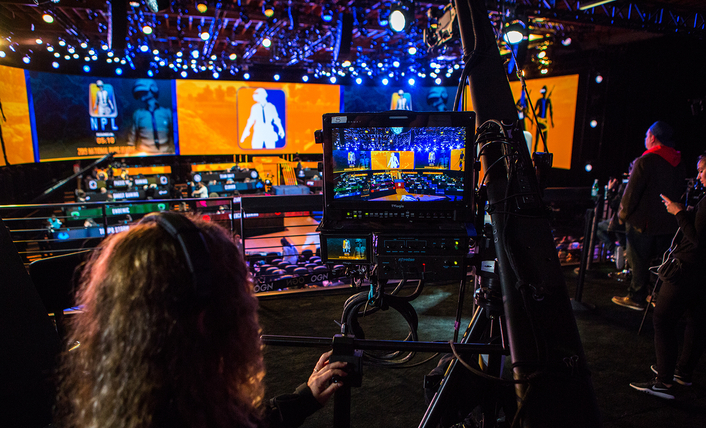 This is used mainly to drive the FOH big screen content. But we can take SDI out from any eight of those 160 feeds into the main mix. Excluding the NDI content, that’s 160 discrete sources.

A second sub-mixer, directed by two supervisors, cuts feeds from the Observer pen – there are a further 12 game machines being operated in spectator mode by experienced gamers. They can use their knowledge to predict the best places to position themselves, providing an array of perspectives for the director to choose in-game action from. The nearest comparison to a live sports broadcast would be having a 12 Steadicam operation running around the field – or else think of it as a bit like the ref-cams we’ve seen in some sports, but on a grander scale. 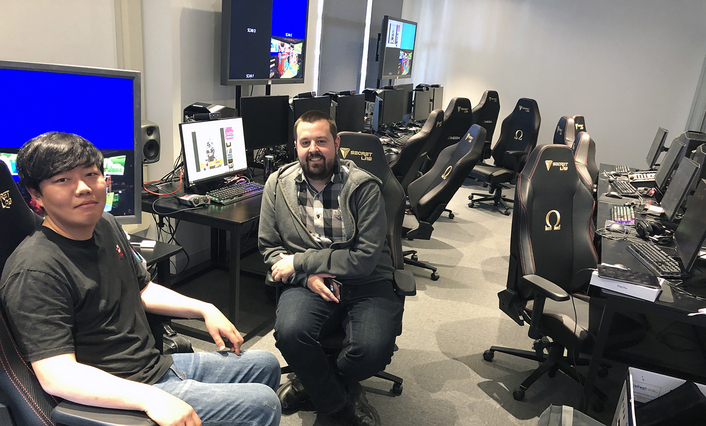 In terms of audio, there are four “shoutcaster” (commentator) and analysis positions. Then there are influencers; they can take a copy of the feed and add their own voice to it for their respective Twitch/YouTube channels.

The audio workflow changes depending on the type of event but with eSports, and certainly with Battle Royale events, there’s always a high level of complexity involved, requiring both high capacity and flexibility of setup.

This is a point Will Taylor, audio and tech supervisor at OGN, picks up on: “Every game is different, so, the audio workflow changes depending on what tournament is being played. A lot of the games have an observed client, which is the main audio focus for the broadcast. Another style requires you to focus on the individual player’s point of view and the individual game sounds for every player, rather than an overview of the entire game.”

The Calrec Brio, which is used for the onsite feeds/announcers’ feeds for FOH, also feeds the Artemis console, which is set up for the “broadcast” side. The Brio also manages a Riedel intercom system and the various Studio Technologies boxes around the arena. In turn, using Hydra2, the Brio takes some audio stems from the Artemis to provide additional audio. 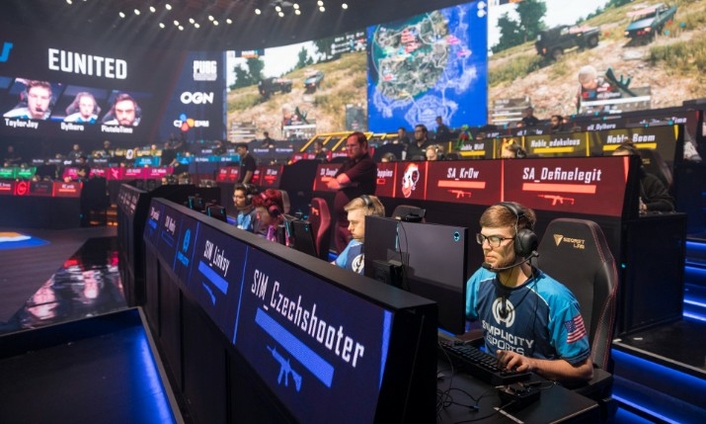 Renowned audio mixer Jeri Palumbo, who has built up considerable experience in the eSports field, says, “Mixing for eSports is dramatically different than live sports. For one, there is a significant difference in the airtime between the two; eSports can be live for sometimes 12 hours or more depending on the length of a round. But the other difference is that live sport is somewhat predictable, whereas eSports is like the wild west. But, that’s the fun part.”

Palumbo highlights several key features of Calrec’s Artemis that make her life considerably easier, saying, “There are some unique things about the Artemis that are brilliant. This includes the auto-mixer – and not being afraid to play with it – and great-sounding parametric EQs and compressors. But for me, the biggest “a-ha” is the way Calrec does its matrix out. I can get really creative with how many IFB sends I have, with the cloning feature and 5.1 direct outs.

“I set up as many IFB totals and audio feeds as I can and I’d only matrix out each according to the game requirements. For me, no matter the application, I build my shows with every aspect that I can possibly conjure up and have them on the board and ready for recall, whether it’s IFBs, floor-sends or any other request. 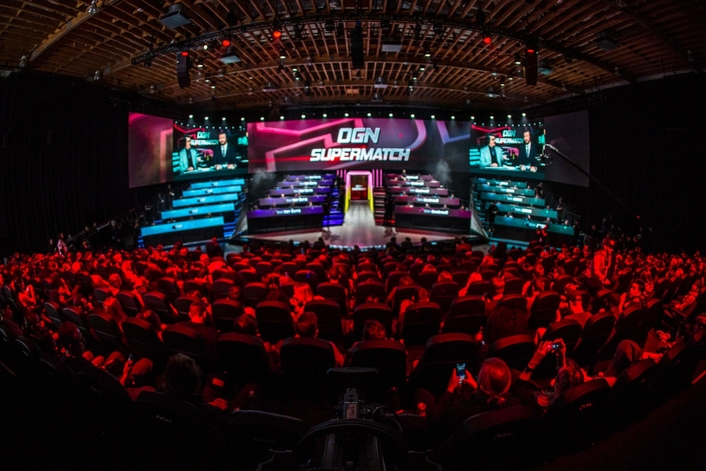 “In eSports, I often do a direct out 5.1 from the Calrec, which allows me to send a 5.1 out down one path instead of having to break it out into individual-pack stems, although I keep a layer of 5.1 stems ready at all times as well. For me, that’s a brilliant option because you don’t have time to do a 5.1 immersive mix while you’re doing a broadcast. I keep that structure throughout all the shows, and I only have to adjust the top layers between each broadcast.” 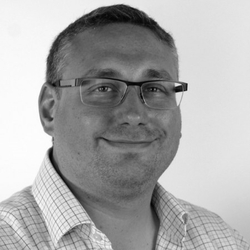 There was a learning curve for ES Broadcast with this installation; you can’t simply impose broadcast workflows. There was a lot of discussions and we learnt a lot during this process. It was a true case of having to work together to understand what had to be achieved but also being realistic about how that could be achieved.

It was genuinely collaborative. OGN – and eSports content producers in general – are using kit in ways that broadcasters simply wouldn’t think of, or even need to think of, and so having De Tune’s eSports expertise always to hand was invaluable to this project.