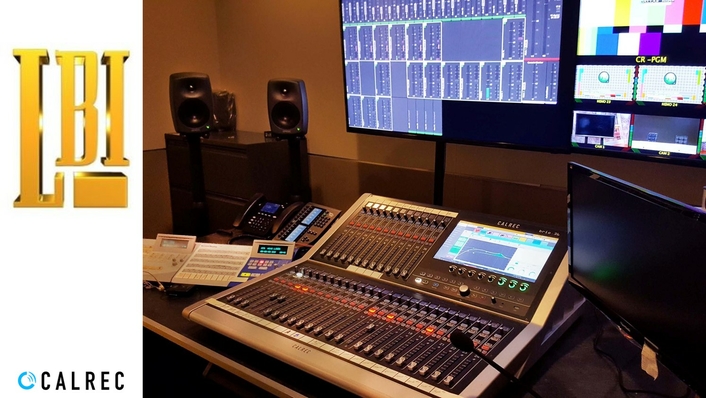 As the largest privately held, minority-owned Spanish-language broadcaster in the US, Liberman Broadcasting, Inc. (LBI Media, Inc.), produces over 50 hours of original television programming each week. LBI Media’s fast-paced news studios require adaptable, quick to set up and easy to operate audio solutions. In order to shift focus as rapidly as the news itself, LBI Media relies on Calrec Audio’s Brio36 and Summa digital audio consoles.

“We chose Calrec based on the company’s reputation within the industry and also to complement the rental trucks we use, the majority of which come standard with Calrec consoles,” says Chris Buchanan, vice president of engineering, Liberman Broadcasting, Inc. “We purchased the Brio36 earlier this year for LBI’s newly launched news operation in our Dallas (Irving, Texas) office, while the Summa was acquired last year as part of a much-needed upgrade at our Burbank, California facility.”

LBI Media relies on both consoles for live programming of its local and national news shows, including Alarma TV, El Mameluco, iTestigo, Noticiero Cierra de Edicion, Noticiero Estrella TV and En Vivo. As with any studio, real estate is important for LBI’s production spaces. The compact form-factor of the Calrec Brio 36 makes it a general-purpose workhorse and its connectivity with the company’s Hydra2 compatible equipment makes it even more versatile. The Brio 36 provides analogue and digital I/O and GPIO, which are built into the surface, making the console ideally suited for broadcast environments.

“With the fast-paced nature of a live news broadcast, having Brio 36’s dedicated broadcast capabilities in our new Dallas location – such as scalable and managed I/O, comprehensive monitoring, surround sound and high-bus quantities, greatly improves workflow,” adds Buchanan. “When we replaced the existing console in the video control room with the Calrec Summa in our Burbank facility, the audio engineers there immediately noticed a difference in the quality of the audio.”

Both Calrec consoles have proven to be powerful, with great networking capabilities and the ability to scale to a large number of inputs and outputs. Buchanan and the LBI Media crew have been very impressed with the quality and ease of use of the Calrec consoles. “Calrec delivers a pristine sound, which we were unable to attain with our previous console,” he says. “They are also easy to drive, provide flexibility and are packed full of assistive features that allow us to concentrate on what’s coming up next. This ensures that LBI and its affiliate stations are producing top-notch content for viewers around the country. The Summa and Brio36 enable us to work smarter, not harder, without compromising audio quality to any degree.”

“We have enjoyed having such a productive relationship with LBI and are pleased that the company continues to turn to Calrec for its broadcasting needs,” says Dave Lewty, regional sales manager, Calrec. “Our consoles offer simple, intuitive navigation and a high level of performance that improve broadcast workflows and accelerate functionality. We are happy that our customers continue to evolve with Calrec.”