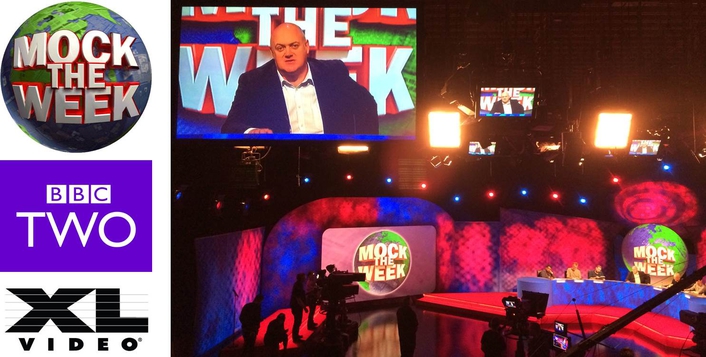 Working with designer, Jonathan Paul Green, XL Video has supplied a package of video projection, screens and LCDs for the latest series of the topical panel game, Mock The Week, produced by Angst Productions for BBC Two.

The show, which is hosted by Dara O Briain and features panellists Hugh Dennis and Andy Parsons, is filmed before a live studio audience shortly before its air date. This ensures that the topics for improvisation are relevant to current news subjects.

The studio incorporates a range of different video elements. The show logo incorporates a world globe, inspired by the show’s theme tune, ‘News Of The World’, by The Jam. This is recreated using a 6ft diameter Repro H screen, located behind O Briain, which is built into the set and rear-projected via one of XL Video’s Panasonic 10k projectors.

Upstage of the main improvisation area, a 16ft x 9ft Repro H screen, with Barco R12 unit supplying rear-projection, creates the backdrop for the comedians and displays info and graphics for the topics being performed.

XL Video’s Senior Manager, TV & Film, Jeff Bailey selected Repro H screens for both broadcast projection screens as these minimise projection hot spots which can be picked up by the TV cameras.

To ensure the audience has a good view of all the action, XL Video also supplied a 10ft 8in x 6ft relay screen with a feed from the broadcast cameras. This is flown above the set at the front of the audience area.