Working with BBC News Senior Producer, Bernadette Kitterick and Cameraman, Julius Peacock, XL Video’s Broadcast Director, Malcolm Whittall project managed the creation of the “mini-studios” which were both located in common areas of the BBC buildings.

For the coverage of both leader debates, the studio was used to create pre-recorded segments with presenter Reeta Chakrabarti, which were then used on news programmes and online to explain “The Worm” – an audience feedback indicator for the live Leaders Debates.

During the live debates an audience of undecided voters, independently selected by market research company Ipsos MORI, were equipped with Lumi IML Communicator voting handsets on which they could indicate their opinion of the various political leaders live as they spoke.

The feedback, via the handsets, was then fed into a Vizrt Graphics Engine to create the visual representation of the feedback – “The Worm”. These graphics were then fed into XL Video’s PPU and overlaid on to the live debate feed and broadcast live on the BBC News channel and online during the debate. 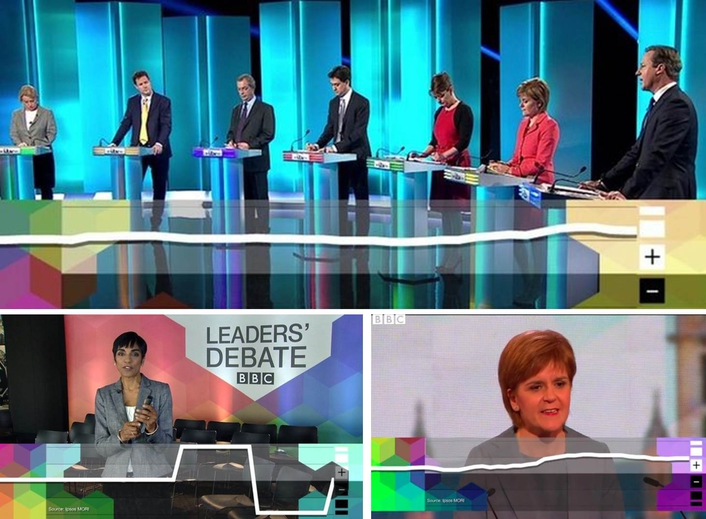 After the live debates, the studio inserted live cameras into News at 10 and Newsnight where segments of the debate and the audience reaction via “The Worm” were analysed by Reeta Chakrabarti and Ben Page from Ipsos MORI.

XL Video’s Malcolm Whittall commented: “We supplied equipment and crew to assist BBC News when the ‘Worm’ was born during the 2010 election leaders debate and feel privileged to be invited back this year.  Although providing facilities for live broadcasts is not uncommon for XL, this project was unusual due to the locations and timings. By using a small PPU and LED lighting, potential problems arising due to lack of available power or heat output were also avoided.

“The temporary nature of the studios in each location also meant that it was key to load in and back-out very quickly. This made one of XL’s touring PPUs the ideal solution as it is designed for short-term use in multiple locations. It was great to work with the BBC News team again, and all the staff made us very welcome.”