Fanta 4 on Tour with LED Video Installation from XL Video 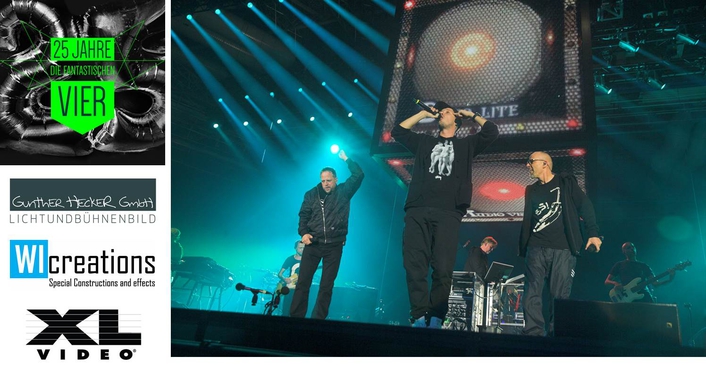 Stage design for the “Record” tour
The creative video solutions specialists at XL Video played a crucial role in the stage design for the Die Fantastischen Vier “Record” tour under the direction of production designer Gunther Hecker. A 4-metre square, 6-faceted LED video cube, each side of which is recordable, hangs directly over the band during the concert. The construction, designed exclusively for this tour, can be moved horizontally and vertically, as well as turned and tilted in all directions. Throughout the entire concert, graphics specially designed for the LED cube in combination with lighting effects are displayed and intensified by the mirrored surfaces on the stage’s rear wall.

This special design marks not only the 25th anniversary of the “Fantas”, but also a decade of collaboration between XL Video and Gunther Hecker along with CUE Design. This cooperation has led to the creation of many special designs. 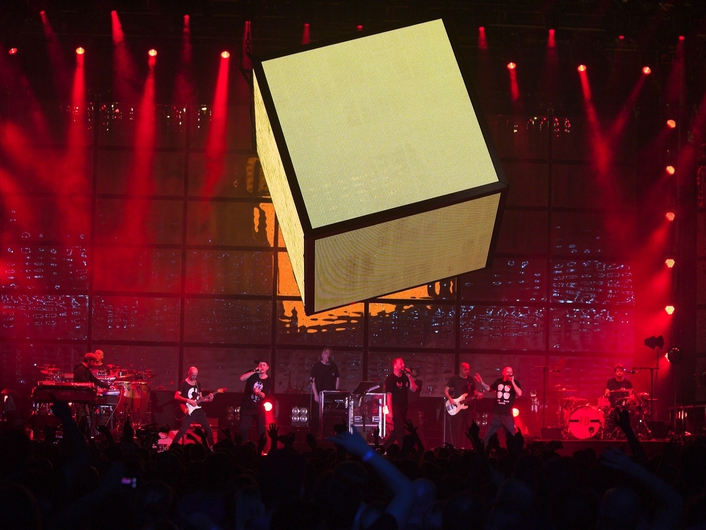 The mechanical system behind the video cube, based on special touring frames from XL Video, was the result of teamwork with WIcreations, a long-time partner from Belgium. The video cube’s total weight of 3.6 tonnes is suspended from four points. Hecker wanted a system that provides stability while at the same time enables quick assembly and dismantling. 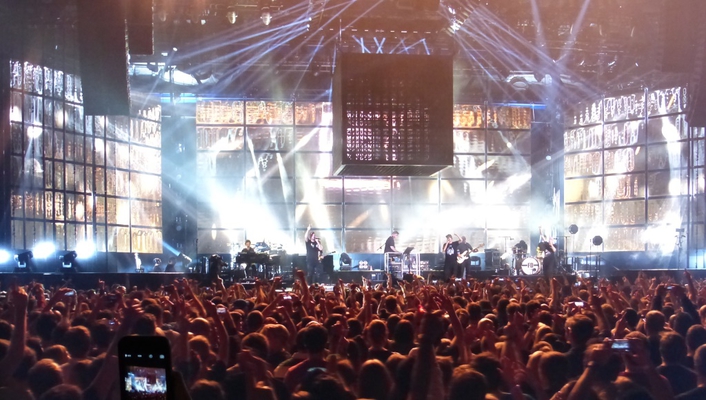 MC18 Hybrid was chosen as the LED material, which provides a superb video display even compared to international standards. The LED lights built into the cube give the lighting designer additional freedom and spontaneity during the show. In combination with mirrored elements in the stage’s rear wall, both subtle visual effects and more extreme dynamic ones can be produced on the stage. Single musicians also can be variably highlighted. Over the years, a trademark of Gunther Hecker’s productions has become the particular mix of media and light sources. Therefore, he requires international state-of-the-art technical solutions for stage and light design. Nidal Echaust and Steve Ackein were responsible for this project at XL Video.

The Fantastic Four recorded one of their sold-out concerts in Stuttgart in 4K. The musical performance and stage design can then be appreciated in high resolution.

XL Video GmbH
XL Video is an internationally renowned supplier of large-image video equipment for events with its German base in Oststeinbek near Hamburg and 3 other offices in Düsseldorf, Munich and Nürtingen near Stuttgart. The Managing Directors in Germany are Denis Papin and Thorsten Lipp.