Christie® , the global leader in visual displays and audio technologies, is proud to announce that its valued partner, Hexogon Solution Pte Ltd, used Christie visual solutions to accomplish a new GUINNESS WORLD RECORDS™ title achievement for the Greatest light output in a projected image ever produced in a single event.

This stunning feat was achieved with 160 Christie Roadster HD20K-J and S+22K-J 3DLP® projectors deployed for a projection mapping performance at the opening ceremony of the SEA Games at Singapore’s new National Stadium. Boasting a total brightness of over 3,200,000 lumens, it beats the previous record of 1,169,000 lumens, set by Freightliner Trucks (USA) at Hoover Dam, in Boulder City, Nevada, USA, on 4th May 2015. 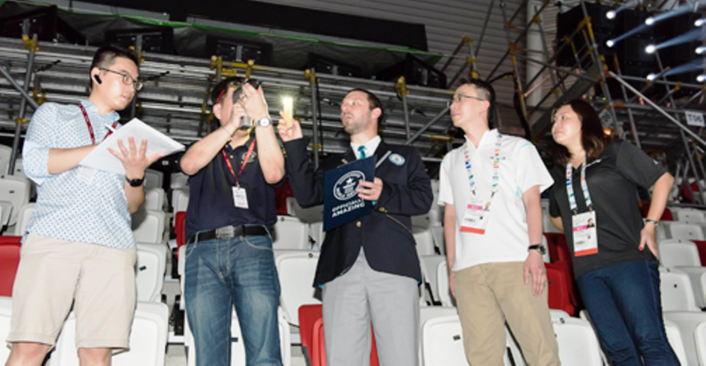 The GUINNESS WORLD RECORDS adjudicator (middle) checks the brightness of the projected image in the presence of independent witnesses, as well as Hexogon Solution managing director Adrian Goh (second from right)

The amazing spectacle was made possible by Hexogon Solution, which installed the projectors on 20 towers situated around the National Stadium where a slew of colourful images and multimedia content were projected on the stadium floor. This is also the world’s largest number of Christie projectors ever deployed for an event. All show contents displayed by the projectors are driven by 18 award-winning coolux® Pandoras Box Media Servers, which are renowned for creating compelling large-scale, multimedia experiences.

Participated in by 7,000 athletes from 11 nations, this is the fourth time that this regional sporting event is being held in Singapore since the event began in 1959. More than 40,000 spectators are expected to attend the opening ceremony tomorrow, which promises to be a spectacular showcase of mass displays comprising 5,000 performers, theatrical props supported by an aerial system, and most notably, multimedia projections as well as light and sound displays for a rousing and captivating visual treat. 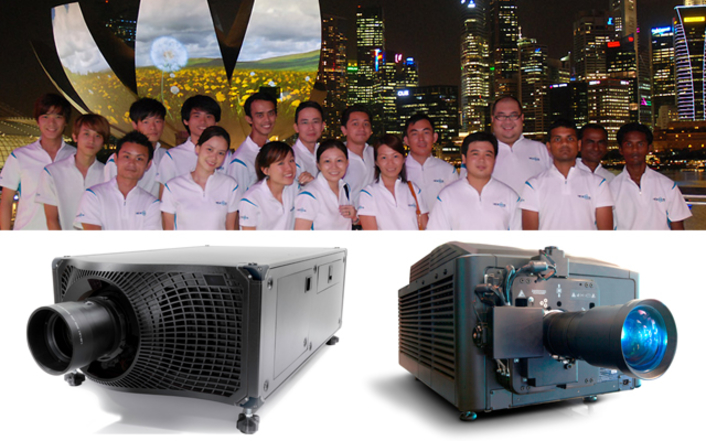 Adrian Goh, managing director, Hexogon Solution, commented, “This is the first time that we are presenting a projection mapping performance of this scale for this eagerly-anticipated sports event, using the floor of the new National Stadium as the canvas. This is by far the biggest deployment of Christie projectors that we have undertaken for a single event. The entire installation process has taken us a month to complete, but we are very encouraged by the end results and are absolutely delighted that the time and efforts that we have put in has set a new GUINNESS WORLD RECORDS title.”

Hang-mounted on specially-built towers above the highest seating area in the stadium, the entire fleet of projectors was carefully set up by the experienced team of engineers and technicians from Hexogon Solution. They spent long hours blending and calibrating the projected images that displayed in stunning 4K resolution. Two dedicated control rooms were set up above the seating area – one on each side of the stadium – to house the Pandoras Box Media Servers and other equipment that supplied the contents to all projectors.

“We worked very closely with the organizing committee to ensure that the visual contents are synchronized with the music cues and performers on the ground. On our part, we also conducted numerous simulations and tests to ensure that we achieve the best possible results,” Goh added.

“I’m pleased to note that through meticulous image adjustments and alignments, as well as the ruggedness, performance and reliability of the Christie Roadster J Series projectors and coolux Pandoras Box Media Servers used for this momentous task, we have managed to deliver a vibrant and engaging projection mapping performance that both Singaporeans and overseas guests will remember for a long time,” Goh continued. 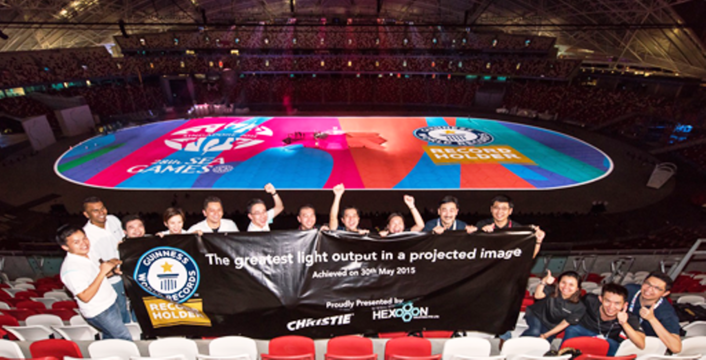 Lin Yu, vice president, Christie Asia Pacific, said, “We are both proud and thrilled that this deployment of projectors have enabled us to attain this amazing GUINNESS WORLD RECORDS title which is the first for Christie in the Asia Pacific region. We’re also overjoyed that the 160 projectors used have exceeded the previous deployment of 146 projectors for the 2008 sporting event held in Beijing. I would like to thank our valued partner Hexogon Solution for the tremendous efforts in setting up the projectors for this major event and playing a key role in building high quality, innovative, shared experiences that will last for a long time.”

Designed with purpose-built features including built-in handles, an improved airflow system and multiple rigging points, the Christie Roadster J Series projectors are built for the rigors and stress of rental/staging and deliver over 20,000 lumens and rich, saturated colours.

About Christie®
Christie Digital Systems Canada Inc. is a global visual technologies company and is a wholly-owned subsidiary of Ushio Inc., Japan (JP:6925). Consistently setting the standards by being the first to market some of the world's most advanced projectors and complete system displays, Christie is recognised as one of the most innovative visual technology companies in the world. From retail displays to Hollywood, mission critical command centres to classrooms and training simulators, Christie display solutions and projectors capture the attention of audiences around the world with dynamic and stunning images.