Singapore marked the country’s 50th Anniversary - SG50 - with huge pride, as flamboyant celebrations erupted all across the island, culminating in a special National Day Parade (NDP) in the Padang, right in the heart of the city. The NDP show was attended by the Prime Minister Lee Hsien Loong and President Tony Tan, several international heads of state, politicians, dignitaries, a host of VIPs plus 60,000 members of the public. It was also broadcast live on national TV, beamed across Asia and streamed locally to giant LED screens in several key locations around Singapore.

Spectacular lighting for the energetic multi-media SG50 NDP show directed by Dick Lee was designed by Javier Tan, and the equipment – including the 350 x Robe BMFL Blades – delivered by Showtec Communications Pte Ltd., which recently purchased over 700 BMFL fixtures.
The BMFL Blades were positioned on all four sides of the NDP venue, constructed specially for the SG50 event, rigged on the top rail of trussing gantries towering above the back of the four grandstands. They were used for all the key lighting of performers spread out across the 120 x 90 metre performance space which was covered in Teraplast. 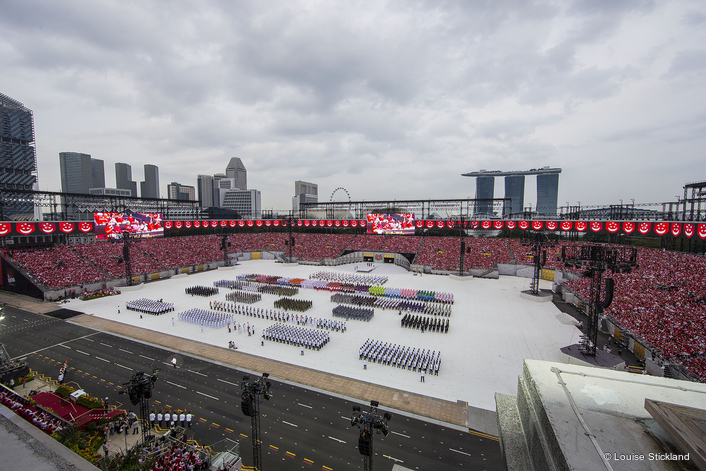 The throw distance was between 60 and 80 metres around the show ground, and that’s why Javier needed the most powerful profile fixture currently available – to have a real impact!

A 360 degree LED screen hung above the top layer of seating circling the arena also produced a massive amount of ambient light through which the BMFL Blades had to cut, a task which they managed effortlessly.

In addition to their intensity and power, he also needed precise shuttering which the BMFL Blade offers, to ensure that lighting was confined neatly to the areas, people and objects it was illuminating, with no spillage or mess. 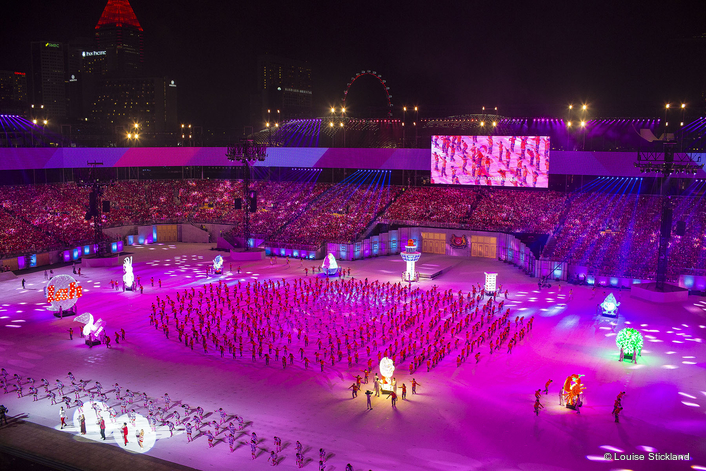 It was the first time that Javier had used Robe BMFLs. He saw the fixture initially at Prolight+Sound in Frankfurt earlier in the year where it was launched, and was confident it would do the job.

“There was no other fixture available with the brightness or the versatility and amount of features,” he commented, adding that he was delighted with the results.

Javier’s starting point for the lighting design was the format of the NDP which included around 10,000 performers, dancers, school, youth and community groups, special guest singers and massed displays by the Singapore Armed Forces, Police and the Civil Defence Forces, an 170 vehicle military column, plus several fly-pasts including Singapore Airlines, an aerial ‘bomb burst’ by the Black Knights display team and Republic of Singapore Air Force (RSAF) F-16 fighter jets in a breath-taking “50” formation.

The ‘show’ – the final section of the NDP – was an energetic and invigorating journey through Singapore’s history and culture, highlighting its multi-culturism, aspirations, community and key people and inspirators fuelling its remarkable growth into the strategic and commercial powerhouse it is today.

The parade started at 5.15, while the ‘show’ kicked in around 7.15 as dusk fell, quickly followed by darkness, finishing an hour later with an awesome firework grand finale … after which the partying continued everywhere … long into the night and morning!

To ensure that SG50 NDP ran as close to perfect as possible, plenty of time was factored into the set-up schedule. 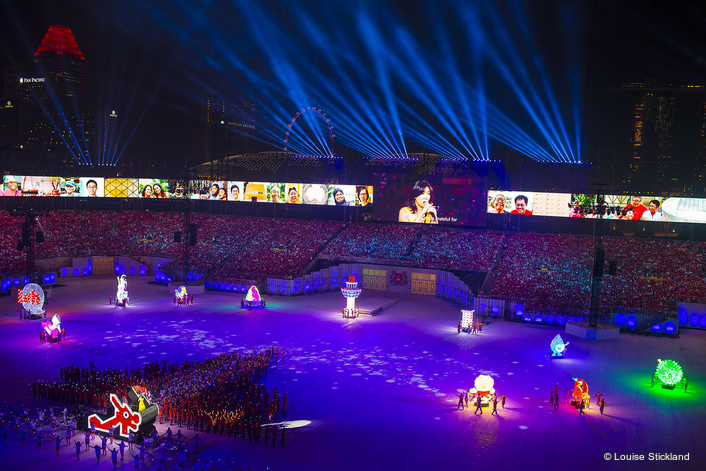 The technical get in began two months beforehand, as soon after the basic show infrastructure was built in the Padang – a green space usually used for cricket matches overlooked by St Andrew’s Cathedral immediately opposite, and the distinctive three towers and skypark of Marina Bay Sands in the distance.

The majority of the intense lighting programming took place in the six weeks immediately before the show, and by the time the big day arrived on August 9th, they were well prepared with six full rehearsals and a public preview under their belts.

This also meant that the kit had to stay in place for two months, dealing with the heat, humidity and frequent tropical storms prevailing throughout the region. The BMFLs – covered in rain jackets whilst not in use - held up to all these environmental factors extremely well. 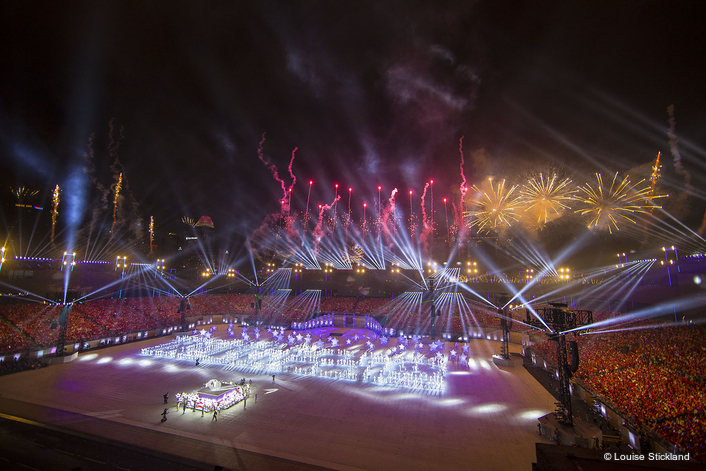 “They remained reliable and stable,” says Javier, adding that he will be happy to use them again on future work.

Javier’s biggest challenges with lighting the event were to ensure that everyone, wherever they were sitting around the parade ground, would experience a similar visual experience, and he also had to work closely with the projection team from Hexogon, who were projecting right across the floor of the space for most of the show period.

The visual integration of lighting and video content required meticulous thought and planning to produce the best results and the co-operation of both departments. ‘The collaboration necessary between both disciplines was really creative and rewarding,” comments Javier.

He programed and ran the show on a grandMA2 console, working closely with his associates Joyce Goh and Clement Cheong. 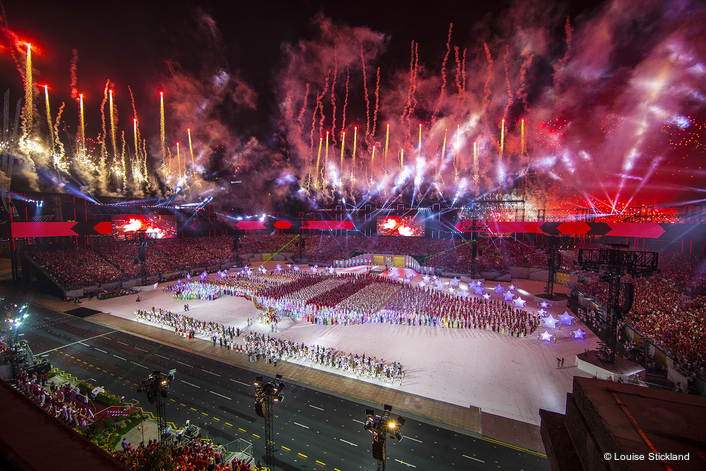 Showtec’s crew chief Jeffry Swee led around 25 technicians working across the build-up, rehearsal and the show periods and the lighting data network was set up and looked after by Fares Aljunied.

The results were a colourful, intense, high-energy fusion of technical disciplines – lighting, video, audio, pyro, lasers – with brilliantly choreographed onstage, on-road and in-air action that was every bit the ‘spectacular’ and uplifting experience fitting the sense of occasion and achievement for all Singaporeans.

Javier and his talented team were extremely proud to have been a part of it.

Javier has lit the annual NDP for the last two years, and for the previous three, worked with LD Mac Chan who designed this year’s SEA Games Opening and Closing ceremonies also using large quantities of BMFLs supplied by Showtec.