WI Moves the Monolith for Beyoncé 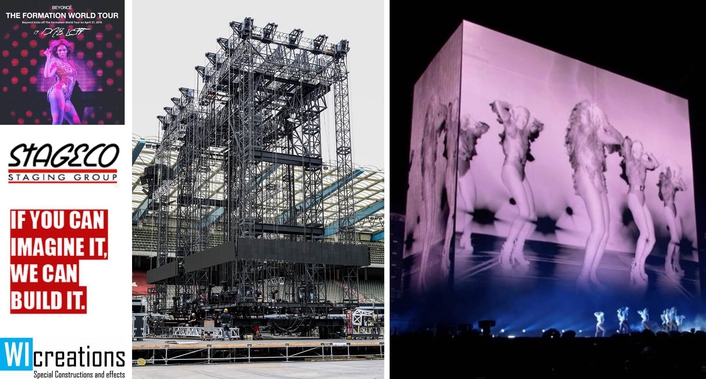 Beyoncé’s “Formation” world tour is one of the highest profile and most talked about of the year so far, with everyone wowed by the massive ‘Monolith’, a 4-sided LED / video sculpture that moves and rotates and is right at the heart of a spectacularly elegant production fusing expressionist art and innovative stage technology.

The 20 metre high by 20 metre wide Monolith is 10 metres deep and was created by production designer Es Devlin working in close conjunction with Beyoncé herself who is involved in all the major details of her stage presentation. It takes the striking beauty, isolation and simplicity of a Monolith design concept to amazing new levels.

The object opens 7.3 metres in the middle, tracks – as two sections on sliding grids – and rotates 360 degrees, a feat of engineering enabled by Belgian automation specialist WIcreations who designed the rotation and sliding system for Stageco,   who built the moving elements of the stage.

The Monolith is clad with 9mm Winvision LED on the wide sides and 18 mm on the narrower sides, weighs a mighty 180 tonnes … and is easily the largest object in all the stadiums they are playing.

Hans Willems from WIcreations led the automation side of the project. During two brainstorming sessions with Dirk De Decker (DDD) from Stageco, Hans convinced DDD that he had a simple and reliable solution to move the two sliding grids manufactured by Stageco. 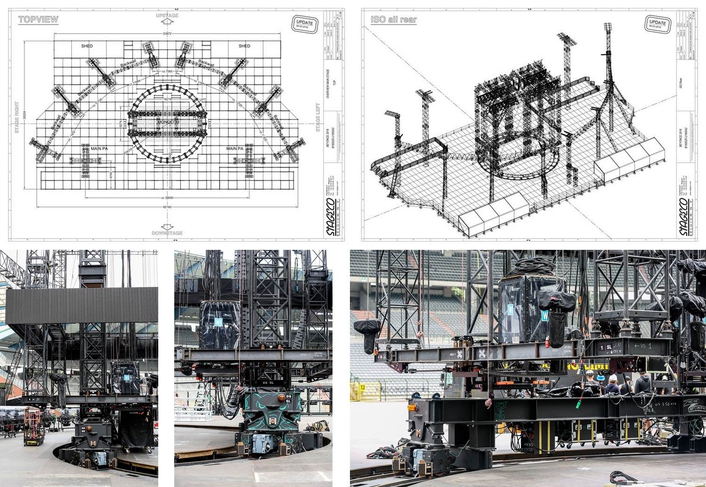 Right at the bottom of the Monolith structure assembly is a circular base track designed by Stageco and manufactured by TCS. On top of this are two large bogie frames, rolling on 8 x 30-tonne rated caster wheels, four of which are driven by the WI control system which works similar to a 4x4 vehicle to produce the rotation … via four drive motors which are perfectly synchronised via the WI control software!

On top of the two bogie frames, Stageco manufactured a large static grid to support the two sliding structures that open and close the Monolith.

The idea was that the box rides on top of the static grid which takes all the vertical loads, while the horizontal loadings (wind and movement) are transferred via 16 x BGV C1 hoists running in unison via the WI hoist control system.

This design can move the structure safely in wind speeds of up to 20 m/s (around 72 Km/h or 45 mp/h) and provides all the stability needed as well as being tourable.

Hans was joined by project manager Yves Vervloet who looked after the ‘halo’ elements while he concentrated on the automation part together with the WI R’n’D department. 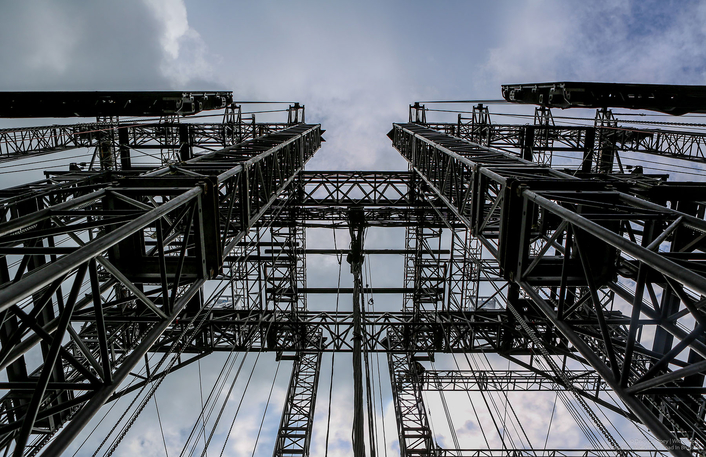 The ‘halo’ arrangement comprises two square grids placed on top of the StageCo sliding grids that have all the LED screen rigging hoists housed inside them. With this ‘halo’ metalwork in place, the hoists are always in the same position, so when the LED ‘skins’ cladding the structure are raised … the screen panels line up perfectly flush at the top and appear to be floating in the air!

The horizontal tracking of the two Monolith sliding grids called for the application of more physics, engineering and lateral thinking.

The solution for this part of the automation puzzle utilizes WI’s 800Kg BGV C1 zero-speed hoists and a custom triple reeving system to ensure that the wind load can be handled.

WI created the two complete automation systems which are leap-frogging with the tour’s production, so all hoists were built into custom frames to maximize speed on get-ins and outs. The custom hoist frames were supplied with transparent skins for rain protection and to give a clear view for visual checks to the system. 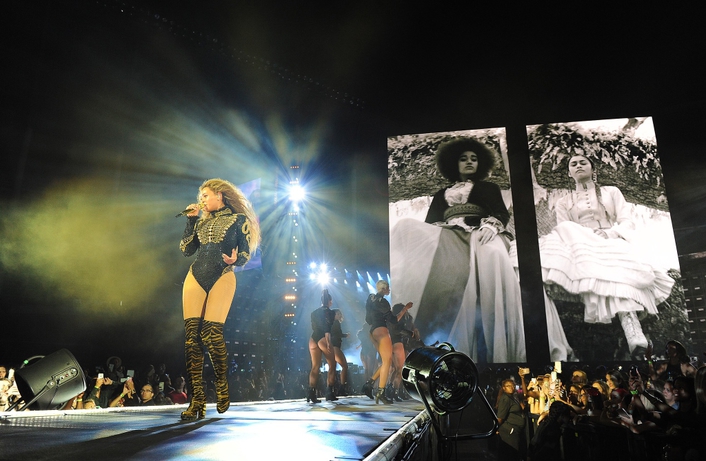 Engineering the rotation and tracking itself wasn’t so much the challenge for WI … it was the delivery timescale, which after receiving the green light from production required the two complete systems to be ready and at production rehearsals in Florida in just 5 weeks.

Hitting this target was helped by WI having an extensive stock of automation rental elements already at base in Heist-op-den-Berg.

Two WI crews of supervisors - Dion Pearce & Lander Michielsens and Miro Kusik & Stefan (Xumi) Schumacher - are travelling with each of the two touring systems and operator Ross Maynard is working with the universal production.

“It was fantastic to work with Stageco’s account manager Dirk de Decker, engineer Tom Frederickx, R’n’D manager Gert Hulsmans and his team, as well as project manager Mark Van Gorp and the Stageco contingent onsite” stated Hans Willems, “Together with the many other talented individuals and leading companies making this one of the most exciting and interesting touring spectacles of 2016”. 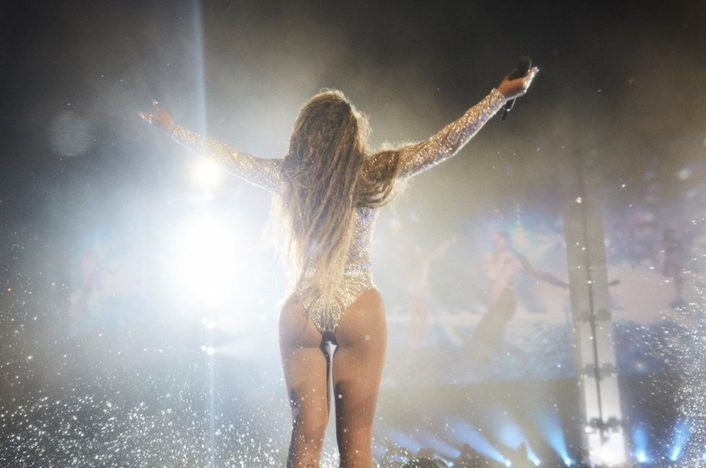 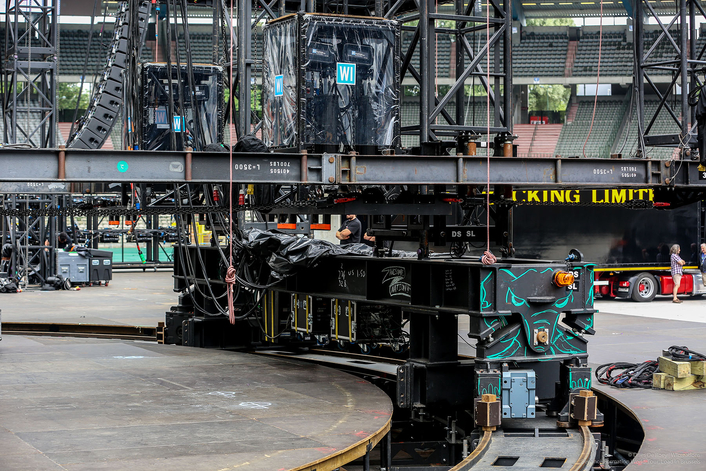 Stageco built the revolving/sliding section of the stage, WI designed and supplied the automation elements and custom ‘halo’ rigging grids, TAIT delivered various other parts of the staging, Neg Earth is the major lighting provider for US and European legs of the tour, and  PRG Nocturne is supplying video equipment.