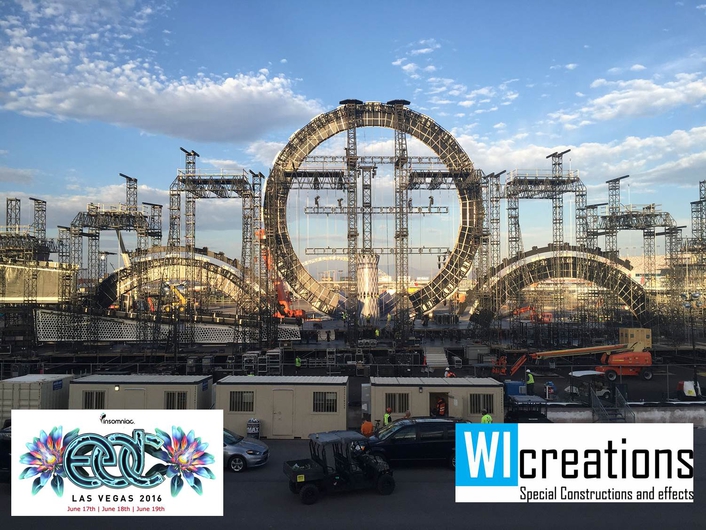 Staged at the Las Vegas Motor Speedway and attracting around 450,000 people over three days with a stellar line-up of the best DJs embracing multiple musical genres … EDC is  one of the largest and most exciting EDM events worldwide.

Dutch design company Jora Entertainment has worked on the event for many years … and EDC’s stage environments are known for their awesome high-impact visual appearance and intricate attention to detail .. an area in which WI also excels.

With the scale of the staging projects being so enormous, and following a highly successfully collaboration on the Beyoncé “Formation” tour a few months previously the WI team, project managed by Yves Vervloet, worked on scenery panels for the enormous 250 ft wide circuitGROUNDS stage, 80% of which was covered in scenery.

The stage’s centrepiece was a large 30 metre diameter arc with 21 scenery panels, with integrated LED panels, masking the video screen behind and making it rounded in shape.

This was flanked by two smaller arcs either side of stage, each with 9 scenery panels, clad in a similar fashion.

Together with Stageco, WI fabricated a series of wings – four each side of stage  - which are attached to the steel structure either side. These resemble real bird’s wings similar to the owl of the EDC logo and incorporating them into the set was a creative integration of subtle but large scale branding in the performance space.

The largest wing – measuring 20 metres wide by 15 high was the most offstage and was made up from 2 sections, while the smallest – meaning 12 metres wide by 25 metres high the most onstage  -  had 7 sections. All eight complete wing constructions were clad with scenery panels. 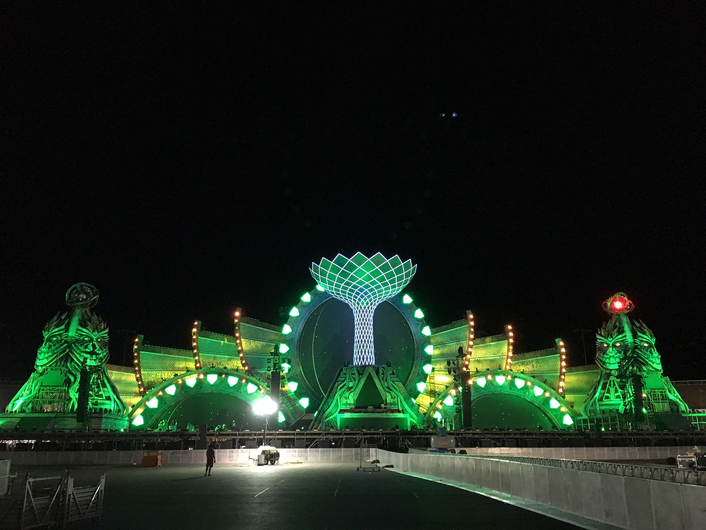 All the scenery elements were designed and built to be broken down, fitted into dollies and transported in containers as the EDC festival tours to four other locations – New York, Orlando, Brazil, Mexico and the UK.

Thirteen dollies were designed and built by WI to contain the wings and the centre arc parts, which can then pack into two freight containers -  a neat portable solution for these elements worldwide.

WI’s design includes special brackets to fly the panels of the arc onto the StageCo superstructure and a tool for fitting to the crane as the pieces have to be craned out of the dollies and onto stage.

Another Dutch company vertical vision which specialises in large format digital printing and graphics produced and fitted the scenic skins that finish the décor on the panels.