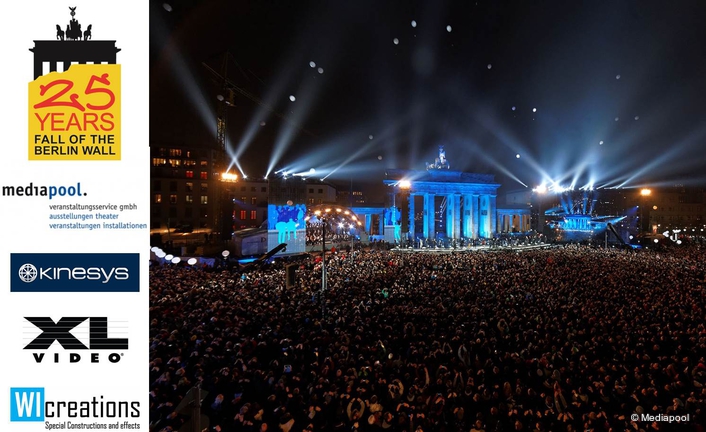 Fall of the Wall Celebrations in Berlin
Belgian based WIcreations applied their unique mix of engineering wizardry and ingenuity to design a custom tracking system that moved six giant columns of LED screen over 70 metres for the massive event in front of Berlin’s historic Brandenburg Gate to celebrate 25 Years since the ‘Fall of the Wall’.

The Brandenburg Gate show, televised live by a number of international news and TV networks, was the highest profile of a number of celebratory elements staged in Berlin over the weekend of the 9th November, all commemorating the landmark quarter-century since that tumultuous moment in 1989 when the Berlin Wall metaphorically ‘fell’. It is without doubt still the most symbolic event in recent German history. 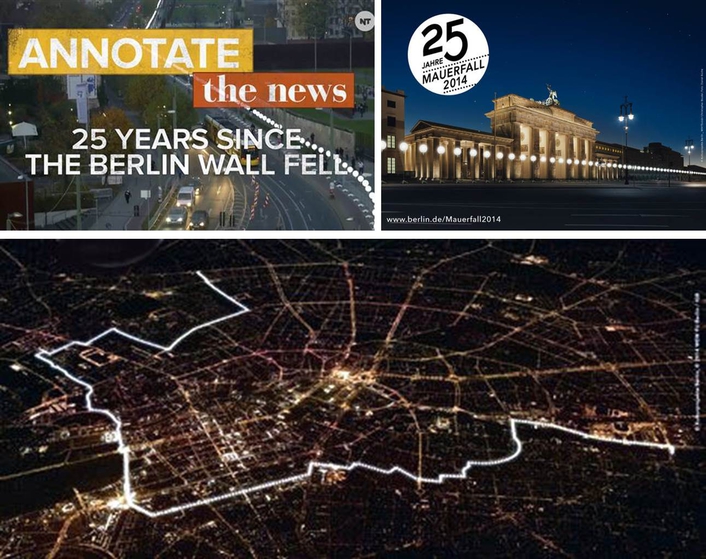 The screens glided seamlessly back and for the along the tracks, opening and closing the vista of the Brandenburg Gate for the tens of thousands who gathered to enjoy the party. Performances on the two stages in front of the Gate included German stars Fantastischen Vier, Udo Lindenberger, DJ Paul Kalkbrenner and many others, while Peter Gabriel gave a unique orchestral rendition of the song  ‘Heroes’.

The highlight of the evening was the release of 8000 white helium filled balloons which marked the route where the wall once stood, accompanied onstage by the Berlin State Orchestra playing Beethoven’s Ninth Symphony “Ode To Joy” conducted by Daniel Barenboim, which was followed by huge fireworks.

The Brandenburg Gate set, including the screens, was designed by the creative team of Berlin based Mediapool, headed by Marcus Mechelhoff, who were also the show’s producers.

The screens each measured 11 metres high and 4.8 metres wide and (including structure) weighed 9.2 tonnes, giving a total of 55 tonnes of screen – including its processing equipment – that needed to be smoothly and elegantly moved into different positions throughout the performances. 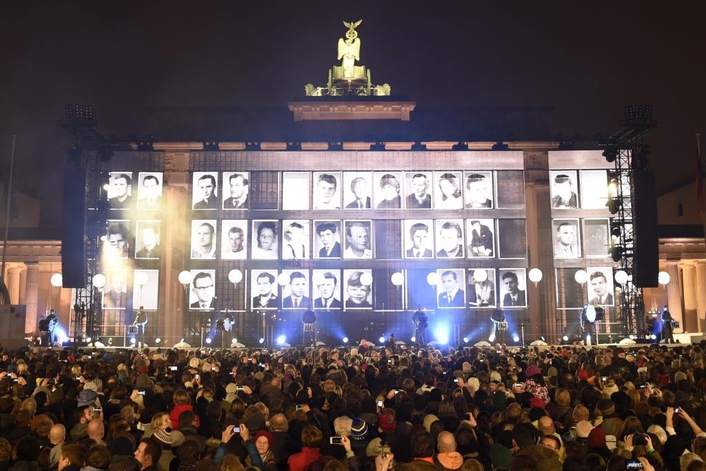 The ‘open look’ - revealing the Brandenburg Gate with no supporting structure in sight - was the goal that Marcus Mechelhoff was aiming for, and also the initial incentive for WIcreations to propose a floor based driving solution instead of trolley rigged LED screens.

WIcreations’ Project Manager Geert Stockmans led a multi-disciplinary team which utilised a number of skills including mechanical, electrical and kinetic engineering and specially tailored control in its development.

When in the ‘closed position’ as one large surface area, the screens completely masked the Brandenburg Gate’s famous Doric columns, revealing the two performance stages built either side of it. When the LED screens tracked out, they allowed a full view of the neoclassical landmark in all its imposing majesty – which was specially lit for the occasion by Björn Hermann.

The bespoke carts that moved the screens were based on WI’s standard WI-Tower base frames and trussing sections. They incorporated similar drive units to the ones used very successfully on the 14-18 Musical Spektakel production in Mechelen this year to track a complete grandstand packed with 2000 people 100 metres up and down the venue.

The drives and automation system to power the servo-motors were based on UK manufacturer Kinesys’ Evo system – each powering a master drive unit per cart. A second slave drive unit was needed to steer the carts smoothly through the two curved sections of the track and to handle resulting horizontal wind loads on the LED screens.

WIcreations’ heavy duty floor based track system, custom designed for this project but with future off-the-shelf usage in mind, has a positional accuracy of 1 centimetre. The track elements were evolved by the combined efforts and resources of Wicreations’ and  Stageco’s R&D, and based on standard Layher system lengths for future use and practicality. 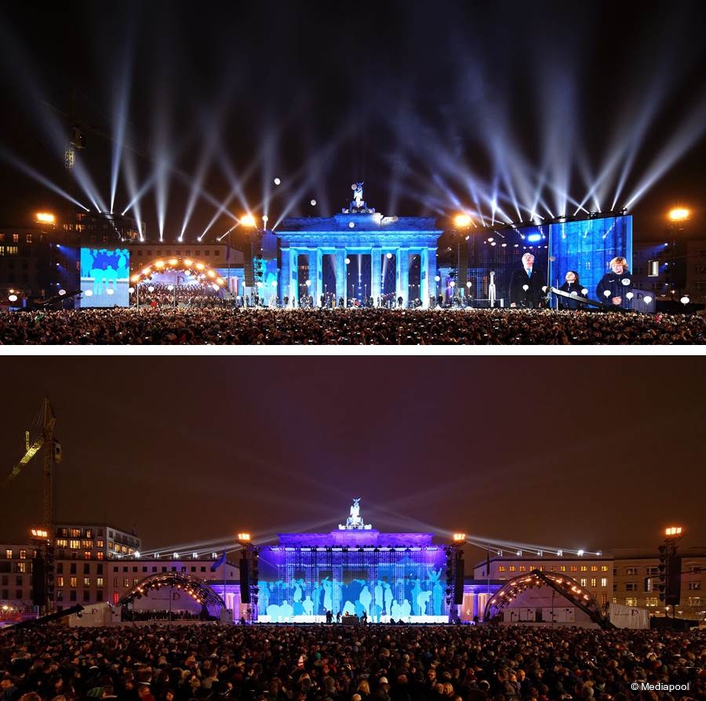 The maximum speed of movement for this concert was 300 mm per second with the carts moved extremely smoothly and precisely via a Kinesys Vector control system operated for the show by Ross Maynard.

As well as Mediapool, creators of many major events for leading German government organisations, the WI team collaborated closely with XL Video Germany who supplied the LED screen, and Stageco whose German operation built the track support structure.

While the task of moving six LED screens was a relatively everyday project, the challenge came with the size and weight, and in working outdoors in central Europe in November, contending with high winds and other potentially hazardous environmental factors.

German TÜV regulations demanded that the system was fully operational with wind speeds of up to 65 Km/hr (18 metres a second) and the structural consequences of that specification were the real challenge for the WIcreations R&D team headed by Filip Wouters.

A full demonstration for the client of one cart took place at WI’s HQ in Heist-Op-Den-Berg three weeks ahead of the show, and the WI installation team of 10 started rigging the system onsite a week before the event.

Weather conditions were excellent during set-up and all the pre-production meetings with Mediapool, Stageco and XL Video, resulted in a very efficient set-up with no delays. On day three, the WI team was already test driving all six wagons.

The Brandenburg Gate “Citizens Party” show was the highlight of an action-packed weekend of events including art and interactive installations commemorating and remembering the peaceful revolution of 1989 and the falling of the Wall, a vital precursor to the re-unification of Germany in 1990.