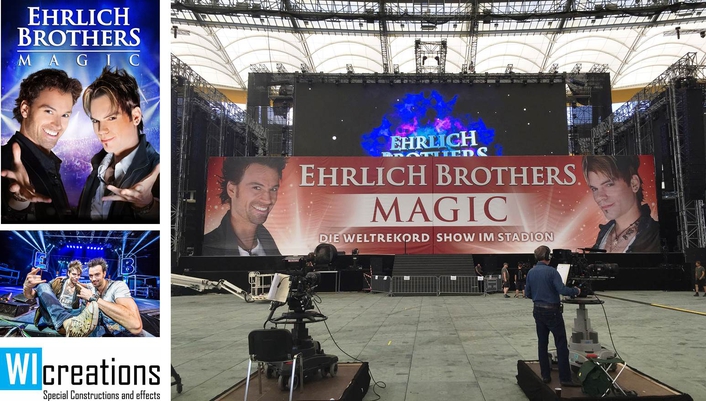 When the Ehrlich Brothers needed a bit of special production magic to move a giant set of scenic doors smoothly and horizontally on and offstage to top and tail the two acts for their incredible 2016 performance at the Commerzbank Stadium in Frankfurt, Germany … their production turned to Belgian automation specialist WIcreations!

“Magic - The Unique Stadium Show” is the first time that the magician duo has ever played a football stadium … and it also signalled the end of a sold-out 120-date arena tour by the Ehrlich brothers in spectacular style.

WI’s Geert Stockmans was contacted by production manager Thomas Bartz who was in charge of co-ordinating all the ambitious show’s massive automation elements. 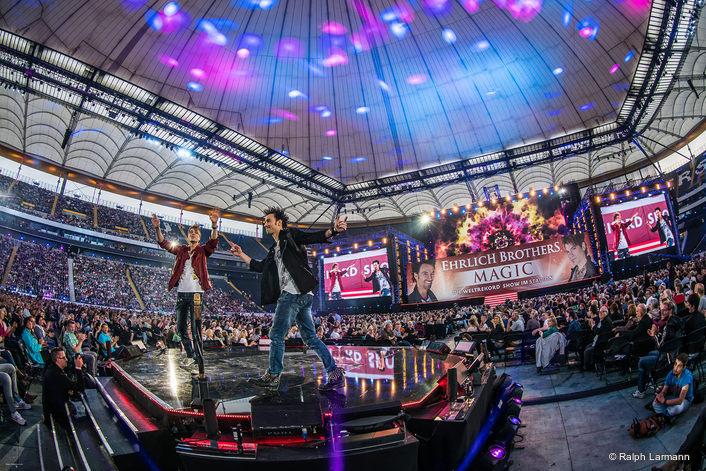 The stage was built at one end of the stadium and the production used the massive LED screen already installed for public viewings of Germany’s UEFA Euro 2016 soccer championship matches as a backdrop.

The massive scenic doors were right at the front of the stage, each measuring 17 metres wide by 7 metres high and weighing 13 tonnes each.

WI utilised their heavy-duty Floor Track system - a standard product, customisable to multiple projects or scenarios - to move the doors. 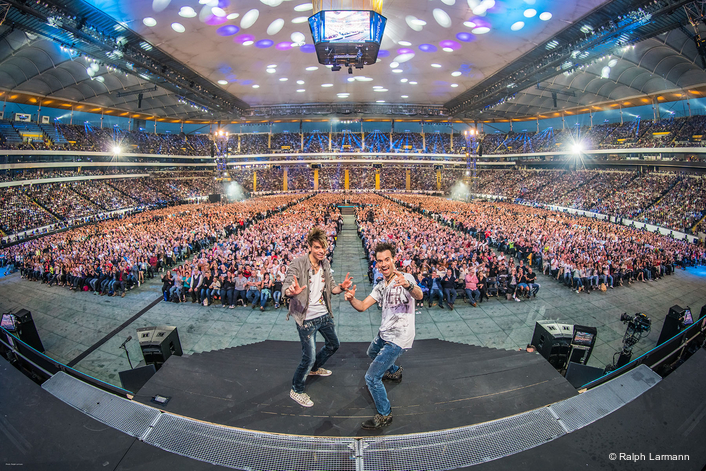 WI Floor Track was initially developed for a special event staged in front of the Brandenburg Gate in Berlin to celebrate 25 years since the fall of the Berlin Wall in November 2014, and is now available as a regular rental item.

The cart / track system is based on WI’s standard WI-Tower base frames and trussing sections incorporating drive units – in this case, three drive trolleys for each of the two doors.

For this Ehrlich Brothers stadium show, the stage left and stage right trussing frames, clad with the printed scenic flats, were secured on top of a bespoke version of WI Floor Track installed for this gig.

The automation system powering the servo-motors that move the drive trolleys was controlled by WI’s own system, developed to have a positional accuracy of 1 centimetre, with the track elements based on standard Layher system lengths for full flexibility.

The doors tracked right offstage into the side wings.

Says Geert, “It was a great show in which to be involved. Producing a magic show in a stadium is extremely challenging and we were very pleased to be part of a highly talented production team that delivered fantastic results.”