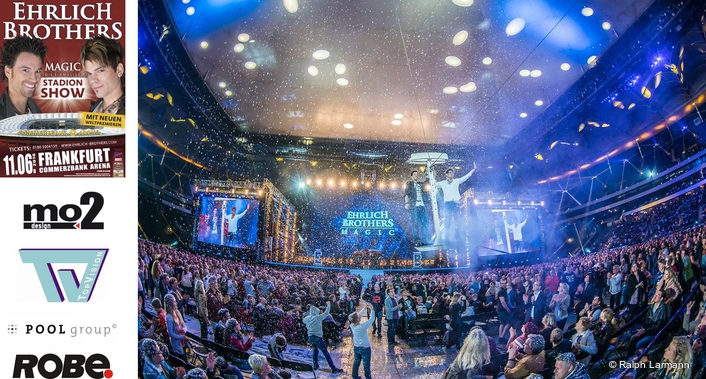 The first ever magic show to play a football arena

Taking the genre of illusionism into a completely new dimension, brothers Chris and Andreas Ehrlich – who had already played to over half a million people on their “Magic – Experience Dreams” arena tour put on a special performance, “Magic – A Unique Stadium Show” at the Commerzbank Arena in Frankfurt.

Designing all visual departments - stage, video and television, effects lighting (design and operating) and co-ordinating the OB and camera technology - for this truly jaw-dropping spectacular experience was the team from Cologne based visual design and creative practice mo2, led by Manfred “Ollie” Olma.

They used 200 Robe lighting fixtures – 180 Pointes, 20 x BMFL Blades and around 1500 other fixtures to help achieve a remarkable event. There were also some Robe PATT 2013s included from the Ehrlich Brothers standard touring package, all of which was incorporated into the stage set up for this show.

It was the first ever magic show to play a football arena and was certified immediately afterwards as an official World Record for the “most viewers at a magic show” by Guinness World Records in recognition of the 38,503 fans who packed into the venue to make it an amazing evening. 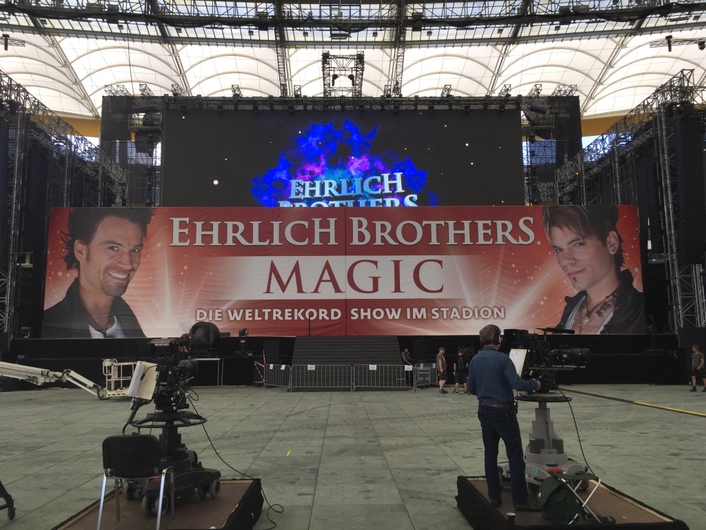 The performance was recorded for DVD and broadcast – a package of 19 x 4K cameras and 6 x GoPros was undertaken by Berlin based production company TopVision - so when it came to lighting, there were many challenges.

Some elements of the existing arena show had to be expanded to fit the space, and new stadium-sized pieces of magic had to be incorporated. An additional B-stage was built in the centre of the auditorium which had to be lit for 360 degree camera work … and the production time was tight!

The stage was constructed at one end of the stadium, and the production made the most of an existing LED screen that had been installed to relay coverage of the Euro 2016 Football Championships and integrated this into the show as a centre stage screen, with the addition of left and right IMAG screens.

Ollie explained that it was essential to light the stadium show for several parameters simultaneously. Good camera shots were essential, yet without giving anything away  ... and so was retaining the intimacy and tension and special rapport with the audience that accompanies any illusionist performance.

Furthermore, he needed to ensure that the two Ehrlich Brothers had a suitable presence in a massive stadium environment. It was a difficult task which needed plenty of precision and thought and synergy between lighting, scenic video and live camera. 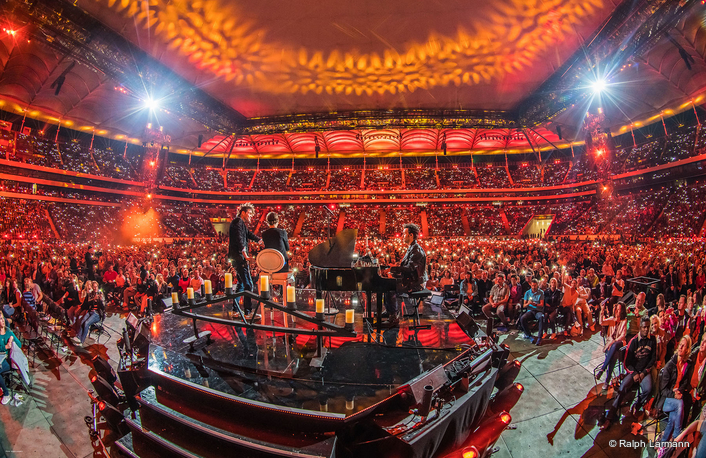 The 180 Pointes were rigged over the stage and around the auditorium and used to light the stage, infield and audience.

The 20 x BMFL Blades were used for key-lighting on the main stage and the B-Stage. The shutters were perfect for precise focusing of the light exactly where it needed to be.

Other challenges for lighting included dealing with the changing levels of natural light flooding in as the show started in daylight and progressed through dusk to full darkness, ensuring a continuity for the cameras.

With Ollie taking on the LD and DPO roles and an experienced and imaginative creative production team involved, the show was a huge coup for all. 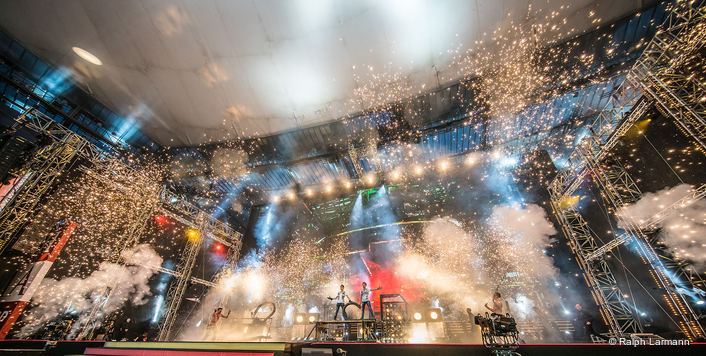 mo2’s project manager was Matthias Allhoff. The lighting programmer / operator was Marcus Kromer, who is also LD for the ongoing Ehrlich Brothers “Magic - Experience Dreams” tour. Lighting equipment for the stadium show was supplied by the Pool Group.

Programmer / operator for the TV lighting elements was Tobias Reinartz.  The media server operator was Moritz Herdt and the video content designer was Saskia Olma. Max Brokbals provided additional support and assistance at FOH, and the gaffer was Tobias Hann.