Vasco Rocks Modena with 550 Robes in the Rig! 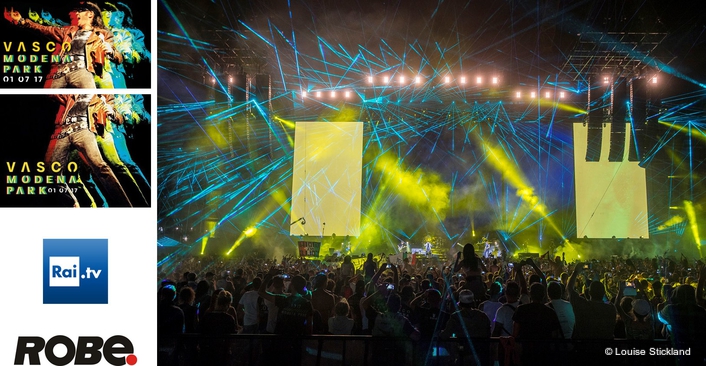 A crazy gig of epic proportions saw a quarter of a million Vasco Rossi fans pack into Modena Park for the one and only 2017 live appearance by Italian superstar and local hero in an epic homecoming concert. Lighting designer Giovanni Pinna, known for the imagination and flair of his work, wanted to make a BIG impact for this incredible show … and utilized 550 Robes as the backbone of his rig – making about around two-thirds of the total fixture count – with 200 x Spiiders, 50 x BMFL Blades and Spots, 200 x LEDWash 1200s and 600s and 100 x LEDBeam 100s.

It's safe to say that most people in Italy have a ‘soft spot’ for Vasco, who was also celebrating 40 years of a tumultuous career which has had its thrills and spills, so it’s good to see the maverick rock ‘n’ roll showman right back on form … performing at his very best.

The show was also broadcast live by national TV network RAI, streamed live to selected Space cinemas around the country, recorded for a DVD release and enjoyed live by the hordes of adoring fans from all ages and demographics.

Vasco's regular production team were again united for this special moment in time. Giovanni has used Robe products in his work for some years, but this is the biggest concentration of them on one show to date. And it rocked! 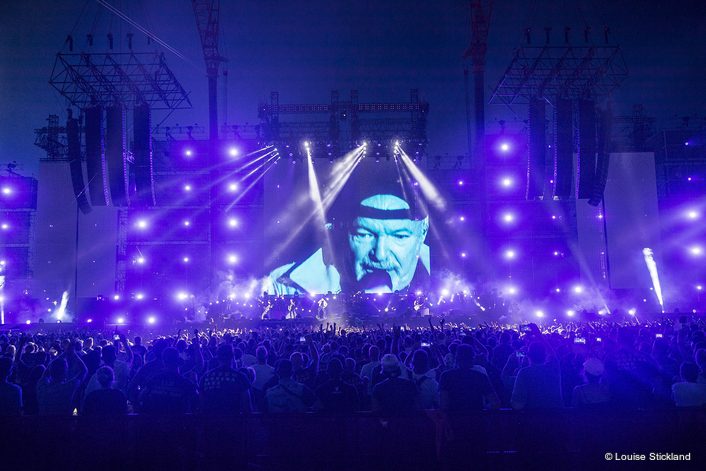 Giovanni started work on this project properly with the rest of the creative team in September 2016, including set designer Claudio Santucci for set builders Gioforma, video screens and content director Marco Piva and live camera director Pepe Romano from Except - who also directed for the DVD shoot and the telecast - together with laser designer Ross Marshall. There were a few initial designs which narrowed down to one simple, bold, raw industrial looking set that became the show.

"With something this huge, you need to make BIG statements – there are a lot of people at the back of the field that need to be included in the action and the emotion, so really the essence was keeping it simple and very high impact," stated Giovanni.

The set back wall comprised 45 scenic panels overlaid with a semi-transparent graphic image. You could see the scaffolding skeleton behind for additional depth but as darkness fell, the panels became more solid. In front of these, Giovanni added a matrix of silver scaffolding pipes and a matrix of lights spreading across the whole expanse which were a vital source of back light. 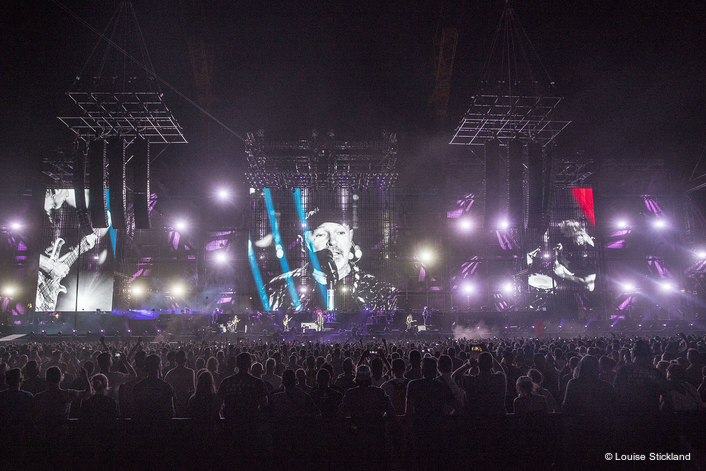 Downstage of that, over 800 square metres of 8 mm LED screens was divided into five sections, one central 18 metre wide by 15 metre high slab and four 9 x 15 metre sections which tracked 125 metres up and down into several different positions throughout the show.

The main sections of the overhead lighting rig were rigged on trusses making up the six ‘towers’ that supported the LED screens at the back and included four 10 metre x 10 metre lighting pods – two above the centre section and two above the two outer towers. These four lighting pods all moved in and out on a Cyberhoist system.

Two hundred Robe Spiiders were the main wash fixture. Ninety were attached to the back wall scaffolding matrix, 80 were positioned on the deck of the three tiered stage, with 30 on the moving lighting pods.

It was the first time that Giovanni had used this many Spiiders. 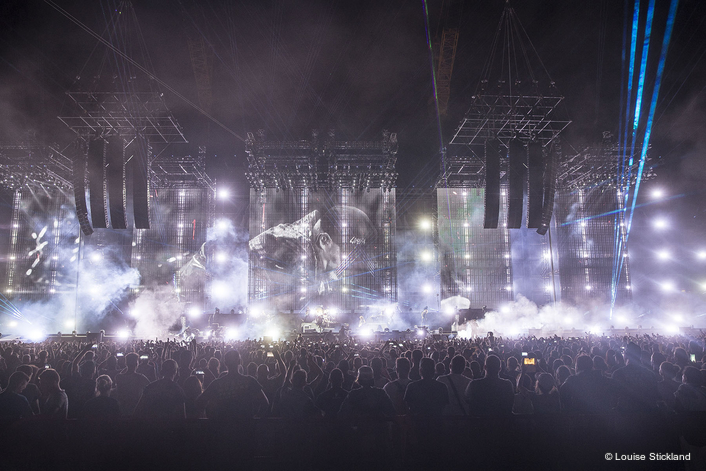 "I love their brightness and zoom and the nice tight, definite beam,” he stated enthusiastically, "They are the perfect wash and beam lights for a show like this and generally a great fixture that totally fitted the aesthetic of the Modena Park show".

He used them in standard mode due to the scale of the show and found the macros very useful for applying specific effects.

They were also important as band lights especially those downstage on the floor, sneaking in attractive and useful low level ‘glows’ for the cameras. 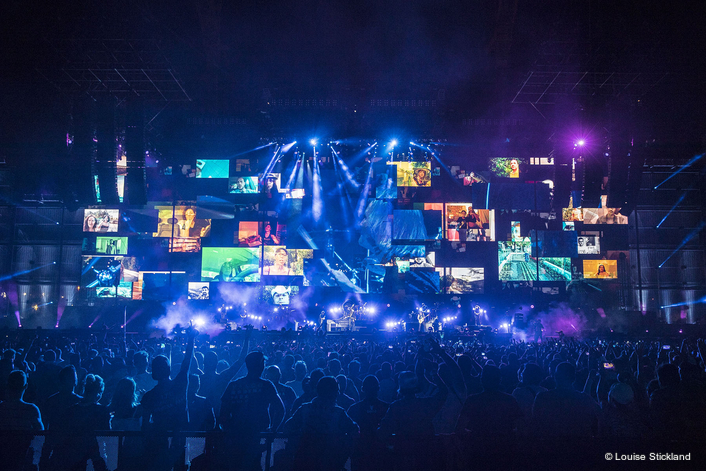 Lighting the audience and having a good house lighting system was vital - for the cameras, broadcast and recording and also for safety, but above all because Vasco is such a great communicator and well known for his amazing rapport with his fans! Without them there would be no show, a fact of which the star is well aware.

Giovanni wanted the house lighting completely integrated into the show ... so 20 of the 30 x PA delay towers were rigged with 160 x  LEDWash 1200s and 40 x  LEDWash 600s, all supplied, together with the rest of the lighting rig, by Rome based lighting rental company, BOTW.

The BMFL Blades were all concentrated in one ‘power line’ of 42 x fixtures on the floor, their mega bright beams burning into the intense night sky ... creating memorable aerial and back-light-looks of the show. They were also used to colour and texture the 45 x set panels. 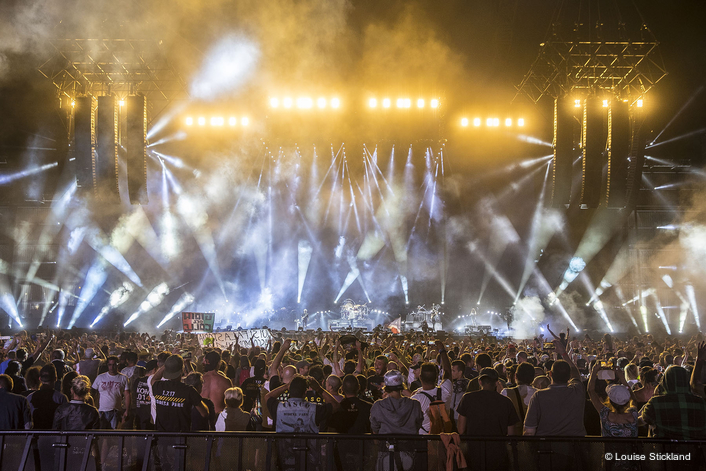 With the scale of the show, the fact it was outdoors, the challenges of managing the smoke and atmospherics needed and lighting with substantial quantities of LED screen onstage - the screen split into five sections and tracked into different positions throughout the 3.5 hour mega performance where the energy levels were full on from start to finish …  a super bright source like the BMFL was the only fixture that would cut it in these positions.

The eight BMFL Spots were rigged on the two offstage moving pods. They had a very specific role which was to assist the nine followspots in producing key lights, augmenting the drum and keyboard riser positions in particular.

The Little LEDBeam 100 is a fixture that Giovanni has used prolifically right from its launch in 2012. In fact, it's featured in every Vasco design since then! 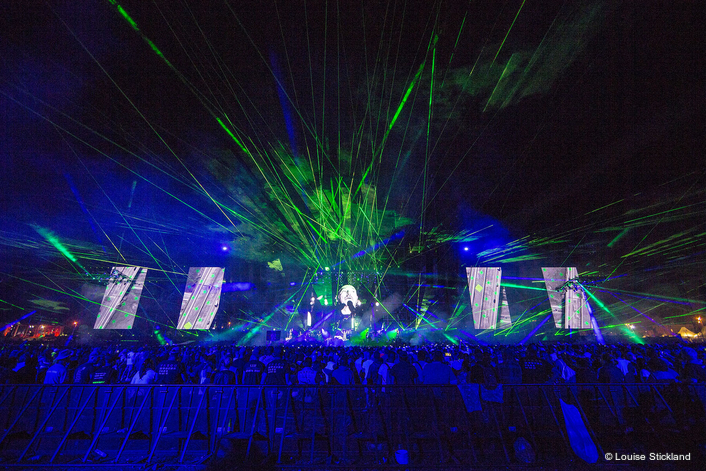 This time around the 100 x LEDBeam 100s were divided into 10 strings of eight mounted on stands zig-zagging behind the band ... they were used throughout the show and were prominent on all the centre stage camera shots. "They are fantastic! You can fit them in anywhere and take advantage of their excellent output – ideal for close work - and the great quality of the light," Giovanni declared.

He ran the show - a total of 58 DMX universes and around 23,000 channels of lighting - from a grandMA2 full size console. In addition to Marco, Nicholas and Ross, they were joined at FOH by Cyberhoist operator Fabrizio Astarista and Giovanni is the first to credit “amazing” BOTW lighting crew chief Fabrizio Moggio

The d3 media server was run by Nicholas Di Fonzo. Lasers were supplied by ER from the UK with PRG Belgium delivering video, staging in conjunction with StageCo and LED screen automation via engineering experts WIcreations, whose Italian partners IK Project dealt with the heavy duty automation requirements. This operation was overseen by Matteo Marastoni on site. 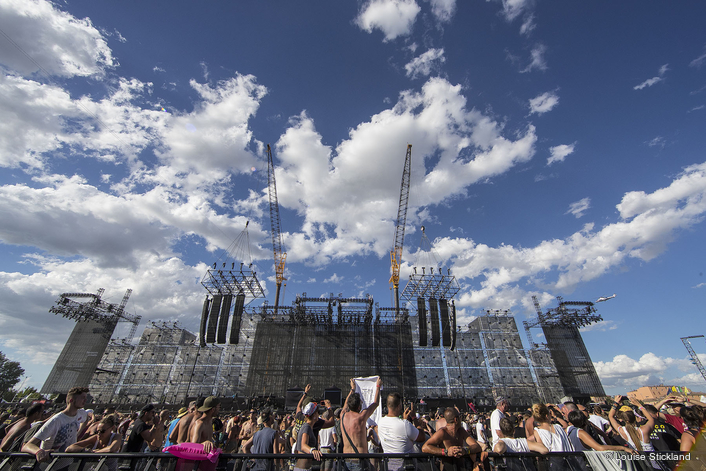 A crazy gig of epic proportions saw a quarter of a million Vasco Rossi fans pack into Modena Park for the one and only 2017 live appearance by Italian superstar and local hero in an epic homecoming concert.

For once, the whole production team was blessed with a generous amount of time to get the stage and set onto site, built and the show programmed. The PA was supplied by Agora with the main arrays suspended on sky-hooks from two impressive 400 tonne cranes.

The concert was a massive success and it looked and sounded awesome.

The city and much of the region came to a standstill as the highways and roads closed and everyone basked in the Modena sunshine and partied gloriously for the day with all eyes on the concert!

The shouts of “Ole ole ole ole VAS-CO VAS-CO” went on well into the night as the site crew started the tear-down and get-out, having been part of a ground-breaking and unforgettable moment in the world of Italian live concert performance.