The 2017 FIS Alpine World Ski Championships got underway on 6th February, with FIS President Gian Franco Kasper officially opening the event during the Opening Ceremony at the Kulm Park in St. Moritz (SUI).

Numerous highlights attracted the visitors of the opening ceremony. The show, titled "Magic Snow - The Birth of a Passion" produced by Freddy Burger Managment, Zurich, revolved around snow and winter sports. It was highlighting the Oberengadin and St. Moritz - not only with its great history in snow sport, with its unique atmosphere and scenery, with contrast richness and diversity, but also with its people, who were present on stage as performers.

Even if the sport is at the center of a Ski World Cup, it is always a cultural and social issue for the whole of Switzerland. This was underlined by the visit of the Swiss President, Doris Leuthard, who was speaking in addition to Swiss OK President Hugo Wetzel.

Opening ceremonies are something for the soul. They set the tone that characterizes and accompanies the entire World Cup. Nicole Bernegger, the Voice of Switzerland, was singing the Swiss psalm with her soul-voice, a local school choir continued the music while 3D mapping on Edy the giant wooden skier and a vertical ballet at dizzying heights astonished the spectators.

Ski legends such as Vreni Schneider and Marco Büchel, Hanni Wenzel and Bernhard Russi, Dominique Gisin, and Nicole Hosp, Giorgio Rocca and Michael Walchhofer, were bringing together memorable sporting moments, and their current successors joined them on stage.

After a fascinating performance of light and dance, music and singing, FIS President Gian-Franco Kasper opened the 2017 Ski World Cup in his hometown of St. Moritz, and 77 Bombay Street finally took part with the official World Cup song "Empire".

It is the fifth time that the Swiss town, located in Canton Graubuenden, has welcomed the FIS Alpine World Ski Championships. The previous editions were in 1934, 1948, 1974 and 2003. The region is famous for its international sports events as it was also the host of the Olympic Winter Games in 1928 and 1948.

All in all, nearly 600 athletes representing 76 nations have entered to participate. In total there will be 11 medal events; five individual competitions each for men and ladies and the mixed team competition. 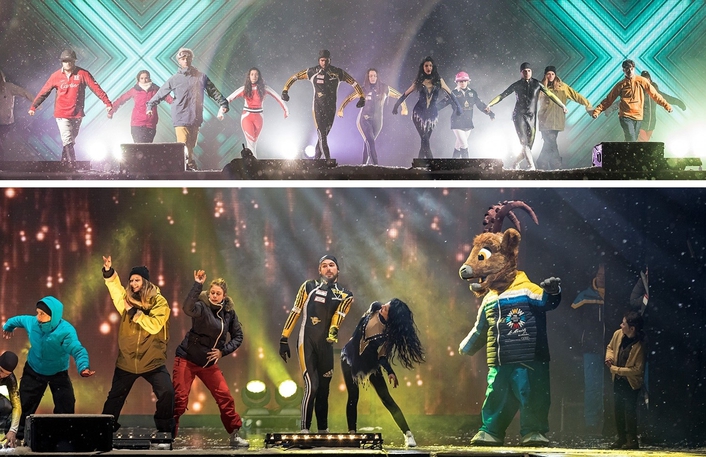 The staging of the opening Ceremony as well as the medal ceremonies and other entertainment programmes surrounding the FIS Alpine World Ski Championships were carried out by a working community formed by Aroma, Auviso and FBM.

The program is carried out at three locations:

2. Medal Plaza on the Kulm Park,

3. Pedestrian zone in the village

The heart of the festivities was the opening ceremony on 6 February 2017 at the Kulm Park, which attracted thousands of spectators in St. Moritz and millions of audiences worldwide on television.

⦁ The most exciting and technically elaborative part was the opening ceremony. Everything had to be doubled and triple (backed up), because the show had to be performed in any case. The opening ceremony was televised live in dozens of countries. The show also was an experience for around 5000 guests at the Kulm Park. This mix between on-site audiences and TV live broadcasting required a dual production with different mixes (audio, camera, etc.).

⦁ During the Ski World Cup Auviso is responsible for the moderators and athletes being heard and seen during the start number drawing and the medal ceremonies.

⦁ In the evening there are live acts in the Kulm Park. Headliner 77 Bombay Street with the official World Cup song "Empire", YOKKO as one of the most popular Swiss music exports and Knackeboul & Friends - they all and other acts guarantee perfect party atmosphere.

⦁ For the presentation of the official World Cup ceremonies, the voice of the native Engadine-born Annina Campell, who is well known by "SRF bi de Lüt", is heard. 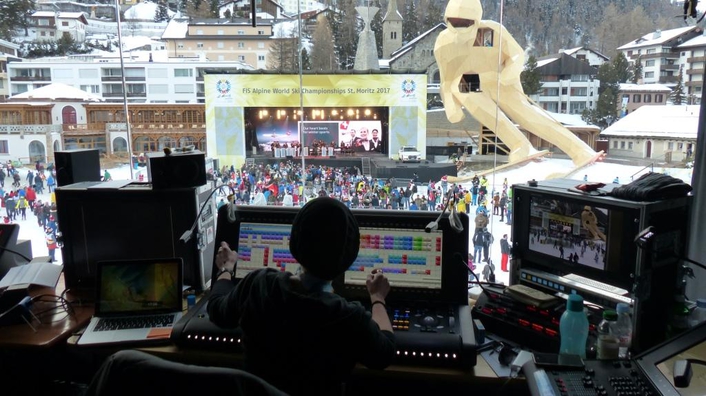 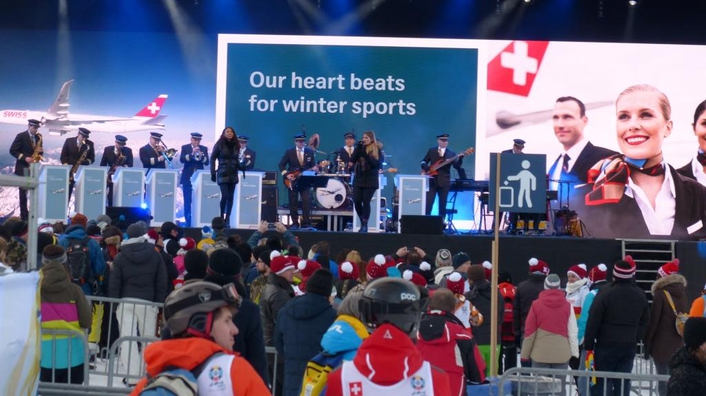