Robert Juliat Lancelot and Aramis Party in the Netherlands 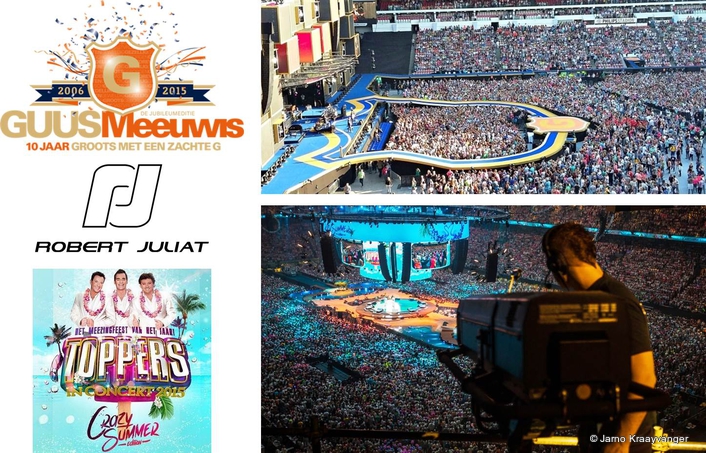 Robert Juliat’s Grand Range of followspots are the ones to call on when you want to party on a big scale. Robert Juliat’s Aramis and Lancelot long-throw models have been out in full force in the Netherlands for two of the countries most exuberant parties.

Lighting designer Martin Beekhuizen used no less than sixteen RJ Aramis 2500W followspots on Amsterdam’s biggest party night of the year as huge audiences flooded into the Amsterdam Arena for the 11th Toppers in Concert extravaganza.

Billed as ‘the singalong festival of the year’, the annual event filled the massive arena – home of Amsterdam’s Ajax football team – for five nights at the end of May 2015. Audiences of over 70,000 people per night – dressed in white with ‘a colourful touch of summer’ - sang along with Dutch superstars, Gerard Joling, Jeroen van der Boom and Rene Froger, and special guest stars Danny de Munk, Edzillia Rombley, Andre and Roxanne Hazes, David Bisbal and Village People, at this bright, bold and colourful Crazy Summer Edition. Clearly followspots as bold and bright were required to highlight the stars.

“The show is performed in the round and the followspot positions are located at a distance of 80m from the stage,” explains Beekhuizen. “I needed something with the muscle-power to handle those super-long throw distances, power through a very bright lighting rig and cope with the fact that the first half of the show was in daylight hours. It was also important to have sixteen uniform followspots of the same model, output and quality – which is no small requirement!” 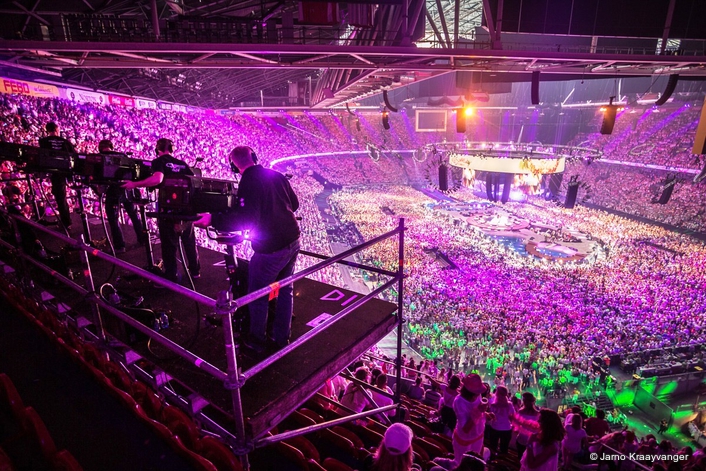 Ampco Flashlight provided Beekhuizen with the sixteen RJ Aramis units and an experienced team of operators, which he was very happy about having worked with both the RJ Aramis and the spot team before.

“I was confident we were in good hands for this mammoth event and I knew the Aramis would be up to the job. Robert Juliat followspots have really good lenses, a great output and are extremely easy to colour-correct. The company takes good care of its reflectors during production by maintaining consistency of the coating which results in a uniformity of colour across every followspot. This makes my job as a lighting designer so much easier especially when we are recording the show, as we were on Toppers, where any discrepancy would be picked up by the camera.”

Over five nights in June, 175,000 visitors and 1,300,000 viewers saw the Lancelot followspots in action. One of the largest and most versatile of Robert Juliat’s followspots, Lancelot’s 4000W powerful output is backed by a fine 2°-5° variable zoom and a superb optical train which minimizes the size of the fixture. A unique cooling system allows the incorporation of modular accessories to adapt it to become the most powerful long-throw effects projector ever built.

“For the Jubilee edition of Groots met een zachte G I again deliberately chose the Robert Juliat Lancelot followspots,” says Marco Driessen of The Art of Light. “This year for the first time in history we were broadcast live on Dutch television, and the Lancelots once more gave the decisive output, colour temperature and reliability for which I had chosen them. 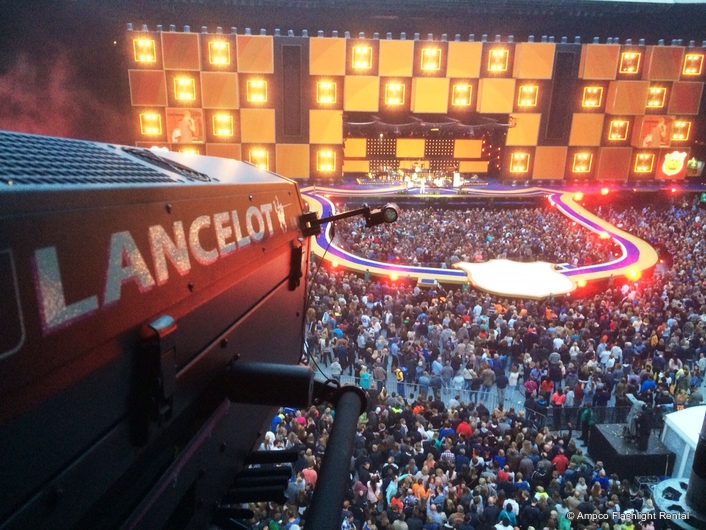 “It was a small effort for the Lancelot to cover the distance of between 60m and 120m to the stage and put Guus and his bandmates in full light, even against the powerfully strong lighting rig and video back wall. The output of the Lancelot remains impressive, and the design features make it an easy job for the spot operators to deal with.

“Next year for the 11th edition of the show one thing is already clear - the Lancelots will be back in action!”

All Robert Juliat Lancelot and Aramis units were supplied by Dutch rental company, Ampco Flashlight: “Ampco Flashlight is known as a full service rental company for theatre, broadcast, live events and concerts,” says account manager, Juan Neele, “The reason we use Robert Juliat is because they guarantee good performance in all these different areas. The output and reliability of the RJ spots on shows such as Toppers and Guus Meeuwis is great – they are truly plug and play units with a big performance!”