Robert Juliat follows Take That on the Live 2015 tour

Top international pop artists, Take That, are currently promoting their seventh studio album, III, on their Live 2015 tour with seven Robert Juliat followspots playing major roles in highlighting the artists and the many theatrical antics that surround them.

Creative director, Kim Gavin, has devised a show that involves a high degree of theatricality with acts, including aerial stunts, taking place across a large set, designed by Misty Buckley, that loops out into the arena from a multi-level dynamic main stage.

Lighting designer, Tim Routledge was briefed to produce a design with ‘a very theatrical look, but with a huge pop punch over the top’. His enormous lighting rig contains a large number of powerful moving light fixtures and LED video screens. Routledge therefore needed followspots that would punch through the sheer amount of lighting and video and cope with the long throw distances on this huge arena-sized show.

He turned to Robert Juliat, chosing three RJ 4000W HTI Lancelot followspots as his main front-of-house fixtures to follow the three members of the band. “Not only did the followspots need to be powerful enough to hold their own in the rig and be able to handle the distances involved, but because of the theatrical nature of the show, I also wanted a unit that had the finesse of a theatre followspot. Robert Juliat was the obvious choice with features that allow operators to use them with the subtlety of a theatre spot without the clunkiness that a touring spot can sometimes have.” 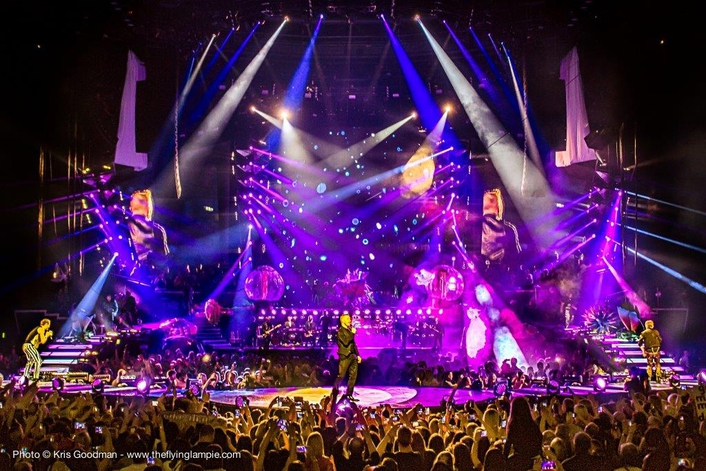 Robert Juliat Lancelot and Victor followspots on (and above!) stage with Take That

The front-of-house Lancelot followspots are augmented by four RJ Victor 1800W MSR followspots stationed front-of-house stage left and right. Routledge uses these to highlight the main theatricalities from other performers, including some flying acts, in addition to filling in on the three main artists from right and left.

Routledge chose to call the followspot cues as well as run the show himself: “It’s a busy show for spot cues and a real opportunity to sharpen my spot calling skills while running a major show at the same time. It’s proved a really fantastic thing to do. Very helpfully, and as usual with Robert Juliat, I’m happy to say we have had no problems with the RJ spots at all.”

The Take That Live 2015 tour is currently touring the UK before crossing to mainland Europe in the Autumn with a team led by tour production director, Chris Vaughan, assisted by technical manager, Phil Broad.

Back for good: grandMA2 joins Take That on tour
Ayrton MagicPanel™-R and MagicBlade™-R cut a dash with Take That
Eurovision Song Contest reaches 195 Million Worldwide