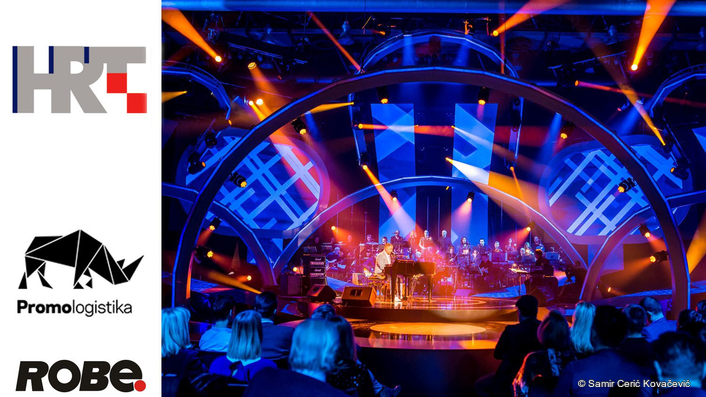 The Zagreb Festival is the oldest entertainment music festival in Croatia and has been running annually since 1953. It was modelled on the world famous Sanremo Festival and is the most significant event on the calendar for composers and songwriters and attracts a wide range of national and local singing talent. Lighting, set and visuals were designed this year by Miro Hrg, with the full production technical package – including a complete Robe moving light rig - supplied by one of the top Croatian rental companies, Promo Logistika.

The show was broadcast live on Croatia’s National TV station, HRT (Hrvatska Radiotelevizija). Miro worked closely with their lighting director / designer Vesna Gregurević to create a stunning looking show that thrilled both a live audience in the Conference Hall at the Plaza Event Centre, Zagreb and engaged hundreds of thousands of TV viewers.

They had two full days of rehearsals for the one day event / broadcast which saw a series of special performances and unique collaborations showcasing a huge amount of new music performed by established and emerging stars.

Promo Logistika, also based in the Croatian capital, has provided technical production for the last three Festivals. Two years ago Miro operated the lights, last year he was the set designer and this year he co-ordinated the team and delivered the full visual package. 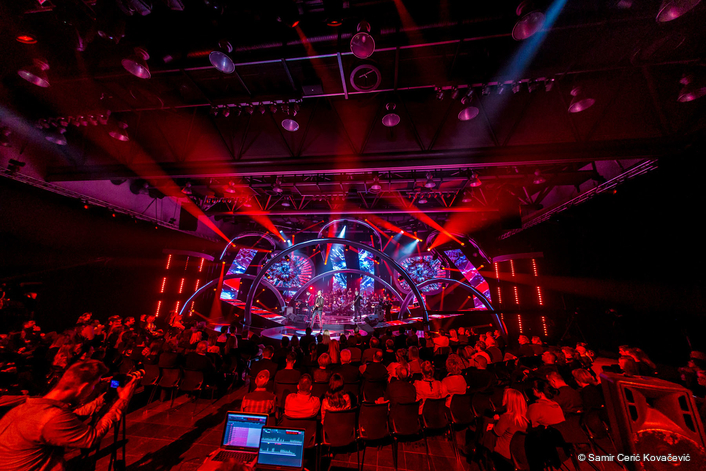 The process started with a pooling of everyone’s ideas, including his own quite clear ones about the specification and format of the lighting. He wanted to use Robe on this high profile show as it’s his first choice of moving light!

Once they had all agreed on the stage design, he drew it in a WYSIWYG visualiser together with all lights, video elements and scenography. His colleague Sven Grbec undertook all the lighting programming in conjunction with Vesna, who gave precise instructions of what she wanted to see for each song.

She also worked alongside Promo Logistika’s video department led by Kristina Bengez and Viktor Krasnić to decide on the video look and content for each song.

Miro had recently used Robe MegaPointes and LEDBeam 150s for the first time in a massive show for legendary Croatian rockers Parni Valjak. The fixtures had only just been delivered to the company, it was their very first gig, and afterwards, with a much better idea of what they could really do, he jumped at the chance to include them on this. 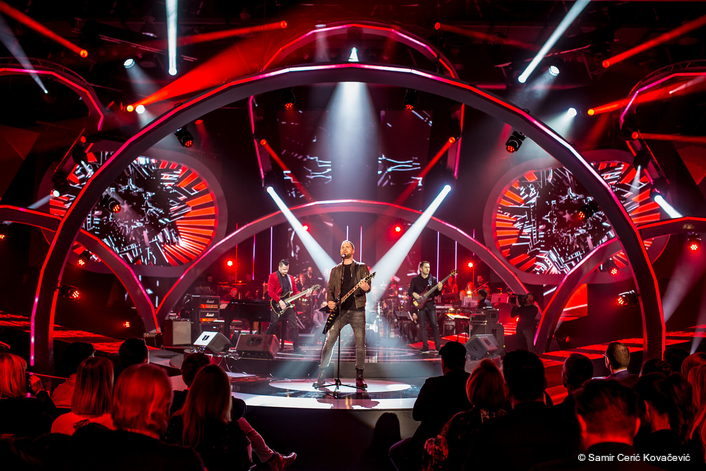 Twenty-six MegaPointes and 24 x LEDBeam 150s graced the lighting plot, together with 24 x BMFL Spots, 12 x LEDWash 600s, 18 x MMX WashBeams, 8 x VIVAs and 18 x CycFX 8s. With over 100 of Robe’s most versatile luminaires at his fingertips … everyone was in for a visual treat!

The 24 x BMFL Spots were mainly rigged above the stage and used for potent, punchy base looks including backlighting the performers and projecting gobo effects onto the stage and bouncing these out around the audience.

The MegaPointes were also above the stage, where they proved ideal for flexible aerial looks, gobos and other breakup effects.

“They are brilliant” Miro enthuses, “the output is something else, and the gobos and prisms are excellent – really powerful”. He loves the fact he can use these in ultra-beam mode one minute and then as a standard spot the next. 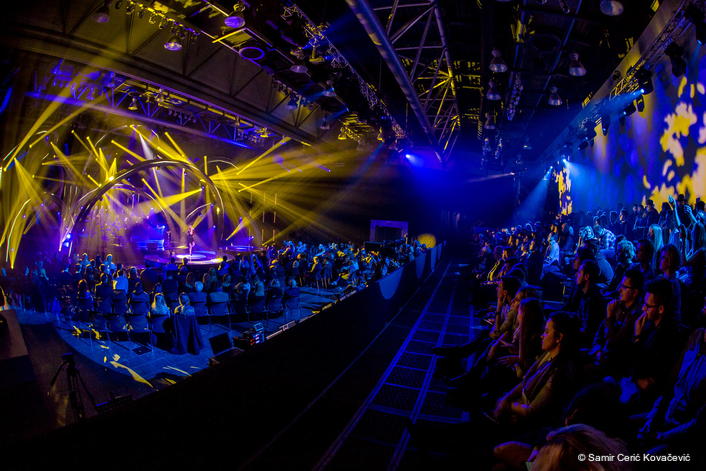 He found it interesting to juxtapose MegaPointes with the BMFL Spots, “You can have a wide BMFL gobo-look set up, complimented with MegaPointes in narrow beam mode, and then – BAM!!!! - flip all the MegaPointes to wide / gobo as well, and you’ve doubled the amount of fixtures in a very high impact move”.

He adds that he loves the colour mixing and the precise movement of the MegaPointes.

The other new fixtures on this show were the LEDBeam 150s, also a recent acquisition by Promo Logistika. He wanted to accentuate the set arches by having fixtures attached on some of them, and then opening the space even more, making it appear bigger through some clever lighting trickery!

The LEDBeam 150s were ideal for this due to their small size and pokey output. Miro thinks the zoom is excellent, with latitude to pull the beam in tight for definite and more assertive looks and then open it out for the calmer and more even washes engulfing the stage. 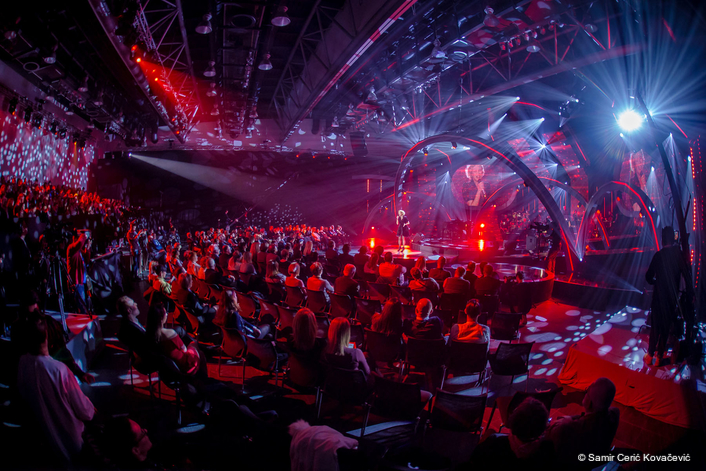 Solid, reliable and every bit the industry standard they have become, the LEDWash 600s were used as a base orchestra wash and for the main central performance space, while the MMX Spots – a personal favourite for certain tasks – were the main stage key lighting units and also augmented the audience washes.

The VIVAs had a well-defined role in the show, patterning the venue walls with gobo looks and texturing which produced depth and backgrounds for different camera angles as well as the Steadicam shots.

Either side of the stage, the CycFX 8s were arranged in two columns of nine fixtures each, attached to the scenery, bringing additional vibrancy and filling in the corner areas for those all-important back-of-camera shots. They were run in 14-channel mode to capitalise on the smoothness and fluidity of the dimmer and colour effects and the pixel mapping capabilities. “They looked very streamlined when in situ and blended perfectly with all the scenography,” observed Miro. 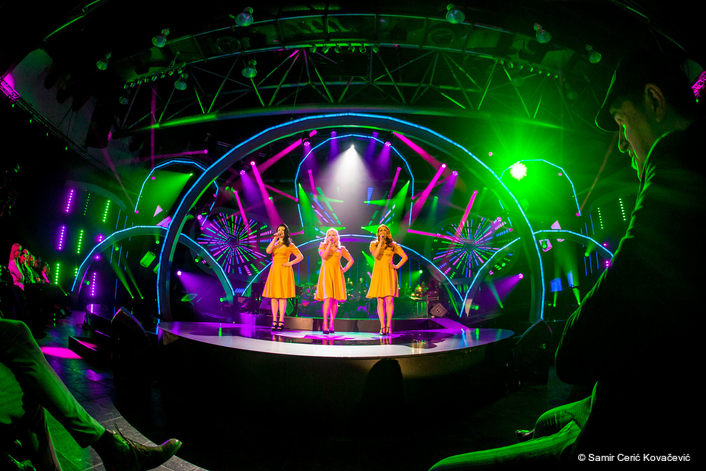 He was particularly pleased that Vesna and her colleagues were so impressed with all the Robes and the creative options they brought to the table, as they frequently work with some competitor brands. Having the experience of working with Robe on this show, he reckons they are highly likely to specify Robe more often.

Vesna specifically liked the smooth colour mixing and the gobos on the BMFLs and MegaPointes, the rich colours and authentic tungsten emulation of the LEDBeam 150s and the dynamic pixel effect potential of the CycFX 8s.

The show was programmed and run on a grandMA2 console.

“We really enjoyed having a wider and more comprehensive creative role in The Festival production this year, together with some great teamwork with our colleagues at HRT. It was a truly collaborative project with all of us contributing ideas and crafting a great looking environment in which director Ivan Miladinov and all the artists could work”.