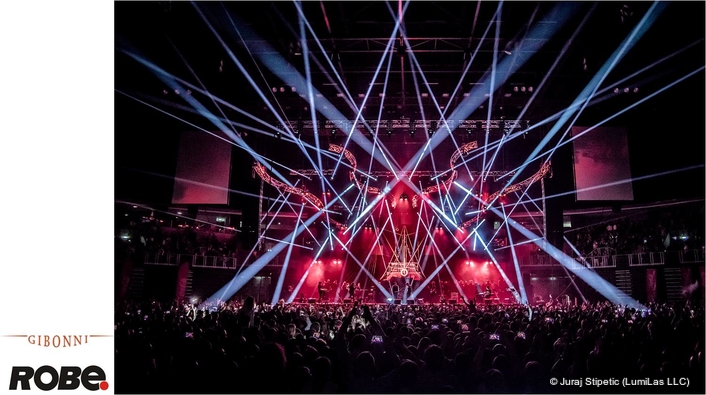 Croatian singer, composer, musician and superstar Gibonni is one of the most popular and influential artists in Croatia and across the whole region, known for blending contemporary rock and pop with Dalmatian folk songs for a unique sound that’s gained him a huge following.

A recent show at Zagreb Arena featured another spectacular lighting design by Sven Kučinić of LumiLas d.o.o. who used Robe Pointes, MMX Spots and MMX WashBeam moving lights to bring the stage alive and keep the visual thrills and spills rolling for 20,000 excited fans who packed into the venue to enjoy a memorable evening. 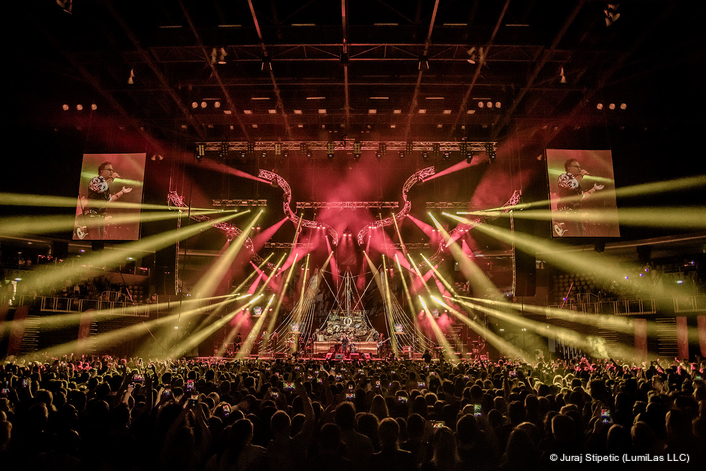 Sven has worked as Gibonni’s LD for the last five years, and for this seminal show he collaborated with Olgierd Kamienski on the video design. The scenography followed a show theme suggested by Gibonni himself, where the main set feature was a life-size cross-sectioned boat mid-stage, complete with a selection of sea-based props sourced from the Adriatic coast. This also provided the starting point for Sven’s lighting design. 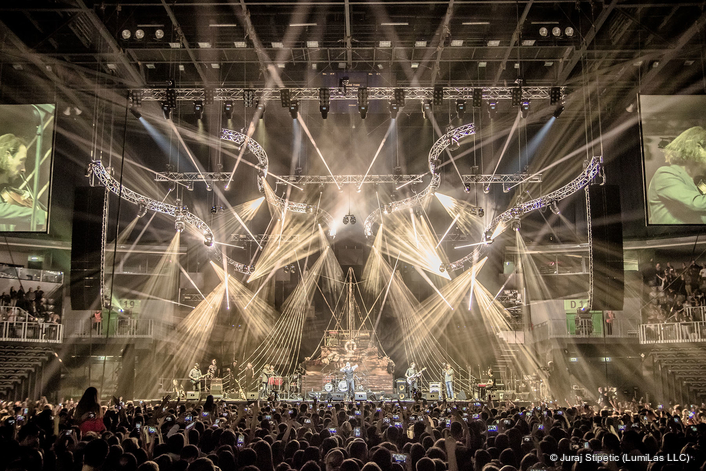 Four highly distinctive curved trusses which also corkscrewed around thanks to a series of custom corner blocks, were flown above the four corners of the performance space, metaphorically representing wind and waves to keep the nautical theme.

Gibonni takes a keen interest in his show presentation, but when it comes to technical specifications and matters, Sven has a free hand. Having built up an excellent rapport with the artist over the five years, he is effectively an additional band member when it comes to planning any live work.
Knowing what Gibonni likes allowed Sven to produce a design that he was confident would receive the green light … which it did!

His main lighting fixtures – all supplied by leading Croatian rental company ELDRA – were 32 x Pointes, 18 x MMX Spots and 16 x MMX WashBeams. Sven initially wanted 48 x Pointes, but due to the fixture’s incredible popularity, only 32 were available, and those proved to be “more than enough” for the large arena environment. 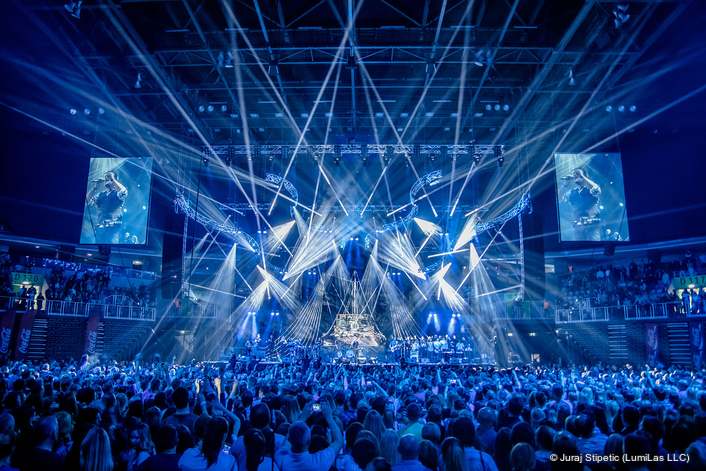 In addition to the four curved trusses, there were further straight runs of truss at the front and back and to the sides of the stage, and also above the audience. These were especially for the Pointes which he thinks work better together when in straight lines, and they give him plenty of opportunity to create a string of interesting and invigorating looks.
The MMX WashBeams were the main front light, rigged on parallel trusses that spanned the arena

The Pointes were the only effects light in the show and so they worked hard as well as sometimes doubling up as top spot fixtures.
The set featured a B-Stage in the middle of the venue, utilized during the encore so Gibonni could get close to his fans, and the audience also had to be properly lit throughout for a large camera crew recording the show for his new music video. “For this, the MMX WashBeams were again the best choice,” stated Sven.

The MMX Spots were used as theatre style side lights. He took advantage of the “fantastic” gobo selection combined with the “VERY precise” CTO treatment and the animation wheels, which were ideal for lighting and texturing the scenery.
This ensured that the boat became a ‘multimedia’ item and an animated ‘breathing’ part of the show, following the tone and tempo changes of each song as the set unfolded, ranging from boisterous up-beat rock hits, hi energy pop renditions right the way to darker more melancholic ballads. Some songs even needed a touch of theatrical scariness! 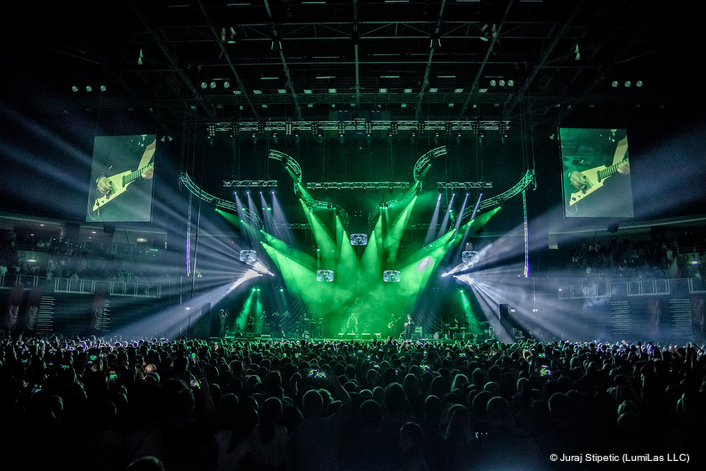 “The Pointe’s optical system is still one of the most outstanding on the market,” he said emphatically, explaining how he needed to create uber-tight but highly visible rays of light, achieved using the Pointe’s superior optics, gobos and in particular the linear prism.
The MMX Spots with their gobos and animation wheels were instrumental in bringing the scenery to life. They are currently a go-to moving light for Sven because of “the punchy output and the excellent CMY colour mixing”.

The overall video look was discrete to enhance the ‘rustic’ vibe of the show created with the lighting and scenography. The LED screens – a series of surfaces upstage and a strip along the front and down the sides of the boat for sea and ocean footage - were concealed and designed to be faded in and out as required.
Sven’s been a champion for Robe for a long time, way before the brand became a global market leader. He thinks their reliability and the fact that the kit works out-of-the-box – and continues to do so - is a big plus, especially when working internationally where spare fixtures or alternatives might be scarce or restricted!

The biggest challenge on this show was creating a good balance between lighting, set and video – all those essential visual aspects - that would make the final product special and stand-out.
Sven programmes and runs all his own shows and specifies a grandMA2 full size. He was assisted by his LumiLas associate Juraj Stipetic for this show. Olgierd Kamienski ran the video, and a “fantastic” team from ELDRA who made it all happen on site comprised Igor Drazic, Damir Drazic, Ante Grabovac, Josip Knezevic, Dario Katacic, Domagoj Pribanic and Zvonimir Borovac. 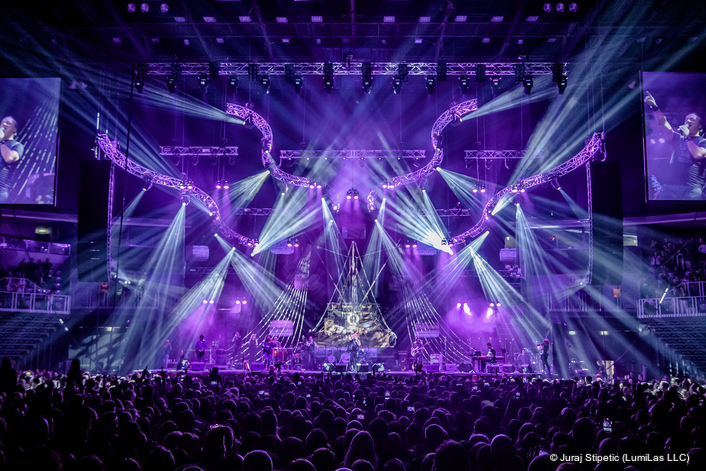