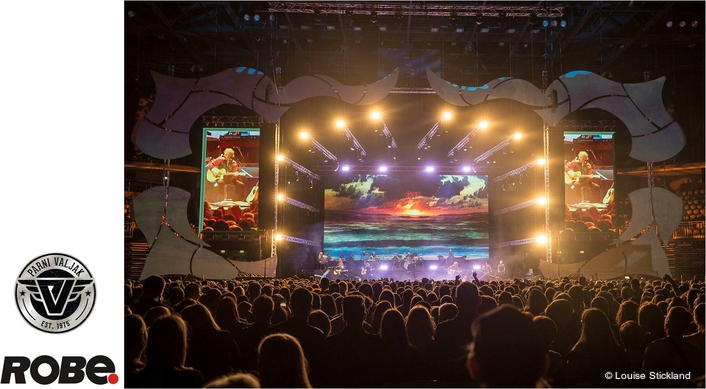 Croatian rockers Parni Valjak were the first in Croatia to benefit from Robe’s excellent new MegaPointe luminaires, as part of a batch just purchased by technical production company Promo Logistika. Twenty-two of the fixtures were part of an eye-catching lighting rig designed by Miro Hrg for a special gig by the band at the 18,000 capacity Zagreb Arena.

In fact, Miro’s design was all Robe in the moving light department! He also utilised 20 x BMFL Spots onstage plus another two – at the back of the arena for follow spots – together with 12 x LEDWash 600s and eight MMX WashBeams. 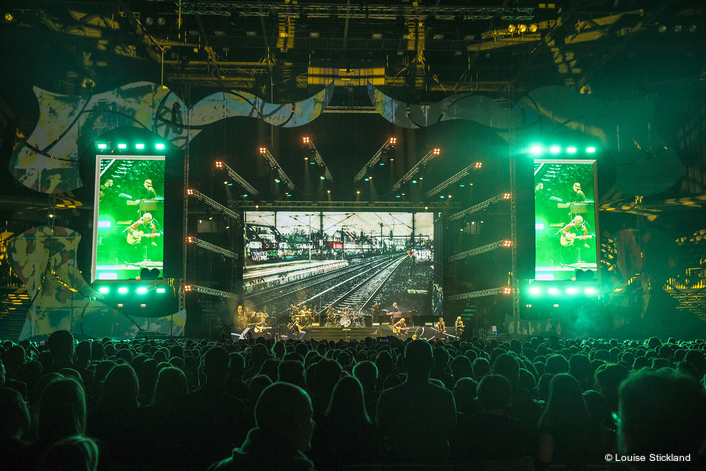 Also brand new from Robe in the Promo Logistika rental inventory were 16 x LEDBeam 150s positioned in the stage wings to illuminate audience in front of the corner areas and also fire across those at the front of the arena.

Miro designed lighting, video and set for this large, high profile one off, the fifth such gig the band have performed this year. He also chose the playback video content which was created by Kristina Bengez and Viktor Krasnić.

The over-stage lighting was rigged on 12 upstage/downstage orientated ‘finger’ trusses flown in an arch, bringing a quirky dimension to the look of the performance space, together with some large scenic flats which were projected onto and framed the stage. Upstage, there was a large 4.8mm LED screen, which worked with two left and right portrait format IMAG screens. 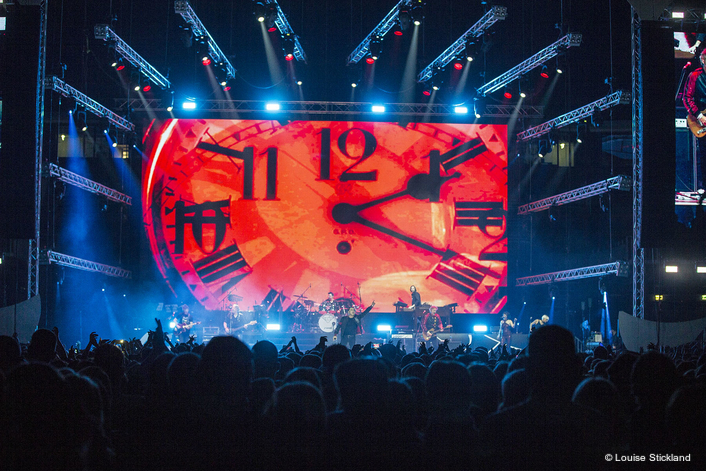 Eighteen of the MegaPointes were hung on these trusses, together with the 20 BMFL Spots, and the remaining four MegaPointes were on a front truss and used mainly for gobo-washing the set pieces and scenic parts of the backdrop for the first part of the show.

For the rest of the show they were used as spot fixtures working in unison with the BMFLs rather than as effects lighting, which was primarily down to the limited programming time. Miro made the sensible decision to go with what he knew he would be able to achieve well within the timeframe!

When he originally saw the MegaPointe demo he was “amazed with the brightness and the quality of light – it’s clearly a very classy fixture! But on this show they were used very subtly”.
He likes the animation wheel and the zoom and the overall finish of the lights and was impressed with how they held their own against the large upstage LED screen. 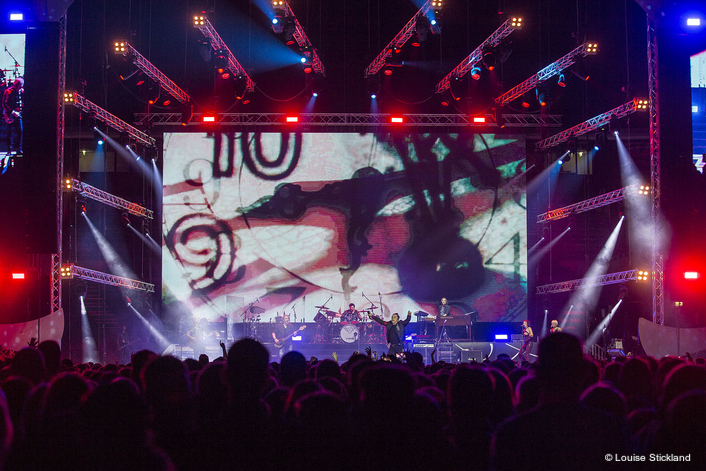 The concert was divided into two sections. The evening started with acoustic and stripped back versions of 15 of Parni Valjak’s classics, and then transisitoned - without a physical break - into the rock section. This powered on vigorously for another two hours with the band blasting out their greatest hits to ecstatic fans.
Miro has worked as their visual designer for six years and now uses Robe in his work whenever possible.

He was delighted to be the first LD in Croatia to get his hands on the MegaPointes. “New technology is always a great buzz” he said. However, as they came straight from delivery to Promo Logistika’s warehouse in Zagreb … to the gig, the intense overnight programming session the day before the show … was the first time he had actually used them!

Normally the band is comprised of around 7 musicians, but for this show they added a string section, percussion and a very cool saxophonist, so there were more positions to cover than normal.
This was dealt with very well by the LEDWash 600s on the finger trusses as the base cover in conjunction with the MMX WashBeams on the front truss providing key lighting. 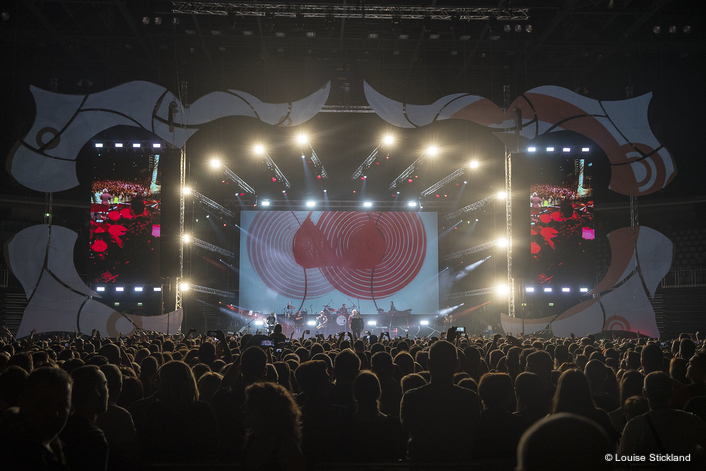 For the first part of the set, the lights stayed relatively static, with some nice overall big and beautiful picture looks, lighting and video working together with a few accents from blinders and some static LED wash fixtures, with BMFL Spots providing back light … all keeping the focus firmly on the band.

As the rock section kicked in, as you’d expect, everything became brighter, bolder and more animated … and gradually more manic and faster as the band enthusiastically stormed through a series of major hits from their remarkable 40-year career!

They will usually leave Miro to come up with ideas for their live work, and for these special acoustic / rock shows their only two requests were that there should be a visible difference between the two acts … and that they wanted an LED screen at the back. 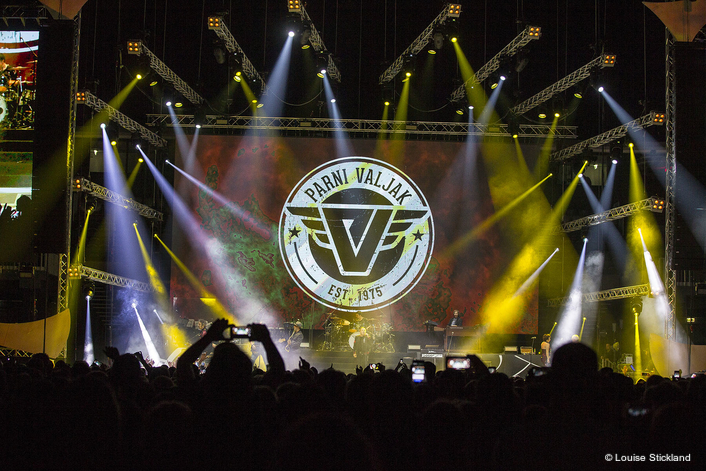 Miro programmed and ran lighting on a grandMA2, and his biggest challenge was getting everything show-ready in such a short time, a task for which he and the rest of the Promo Logistika crew worked tirelessly.

He started using Robe products regularly when Promo Logistika first invested in BMFLs three years ago. They needed a hard-edged fixture and conducted a shootout between a BMFL and a competitor hard edged product … which the BMFL won. “We needed something powerful, especially with all the outdoor shows here in the summer season,” he commented.

That initial purchase was a great success and was soon followed by further purchases of MMX WashBeams, CycFX 4s, CycFX 8s, LEDWash 600s and VIVA CMYs for the smaller corporate shows. They are now one of the largest Robe rental houses in Croatia with over 400 luminaires available, and MegaPointes and LEDBeam 150s being the latest purchase.

“We need quality devices” Miro explained,  “The market is changing … five years ago, it was less important which kit you had in terms of brands for a rental company, but now that’s changed and clients expect to see the best quality equipment on their events”.
“We made a good decision to go with Robe,” he concludes.
All the Robes have been delivered to Promo Logistika by Croatian distributor LAV Studio.