Robe Returns to the Future Again at LDI 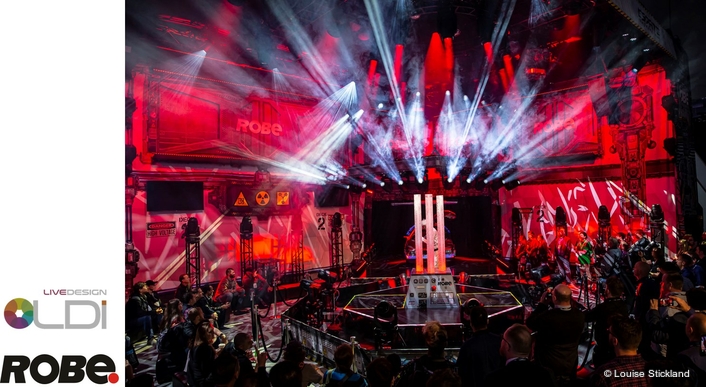 Robe rocked one of its busiest and most dynamic LDI (Lighting Design International) expos to date in Las Vegas, winning two awards, one for Best Creative Use of Light and the other for the T1 product series. 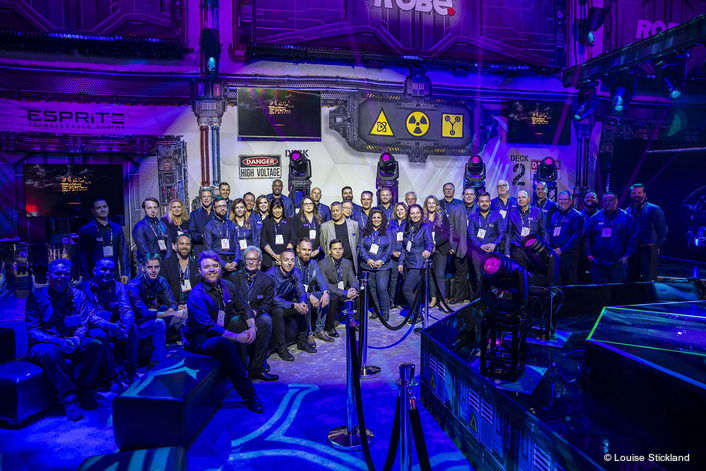 Inspired by the ESPRITE‘s replaceable LED engine plus a host of other ground-breaking features and the iconic Back to The Future movie franchise … the all-action #ReturnToTheFuture part 2 highlighted Robe’s newest products in the context for which they were designed! 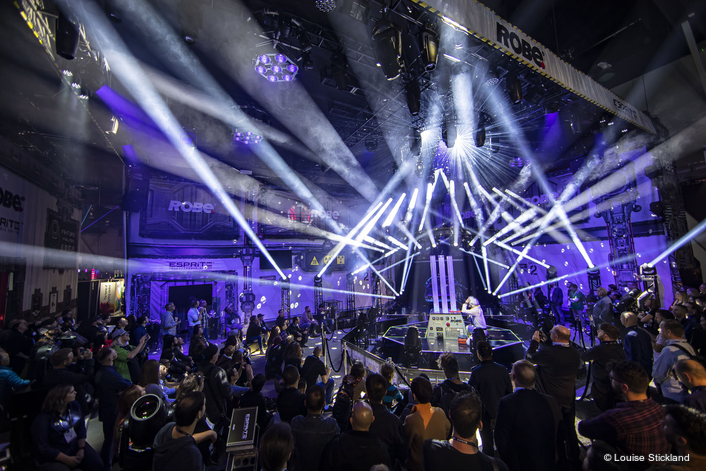 The highly energized 7.5-minute performance played five times a day and had an original DeLorean MMC12 as the set centrepiece, six dancers and around 200 Robe lights - including ESPRITEs, Tetras, T1s, SilverScans, MegaPointes, Spiiders, Tarrantulas, SuperSpikies, LEDBeam150s and PixelPATTs. These were rigged in the roof and all around the sides of the double-decked booth. The spacey fun-filled show included fog and flame jet special effects and a water feature. 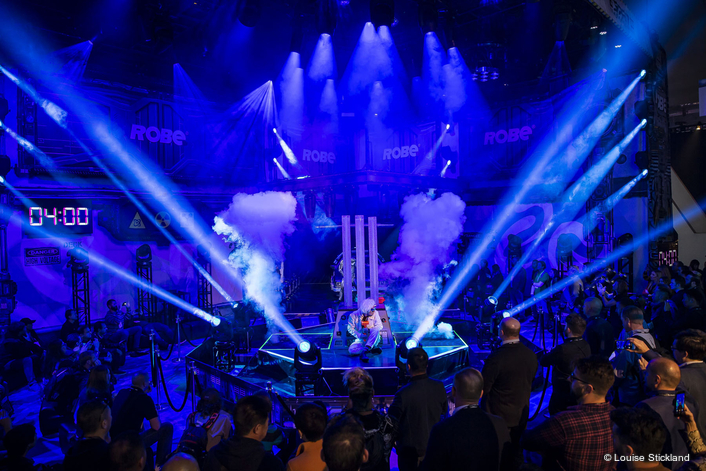 Drapes for all areas of the booth which included separate meeting and demo areas were all designed around the #ReturnToTheFuture garage / laboratory theme.
The booth was packed with people right from before the first live show on the first day and it stayed that way throughout the expo, keeping the Robe North America sales team extremely busy making new contacts and reconnecting with existing clients and industry friends. 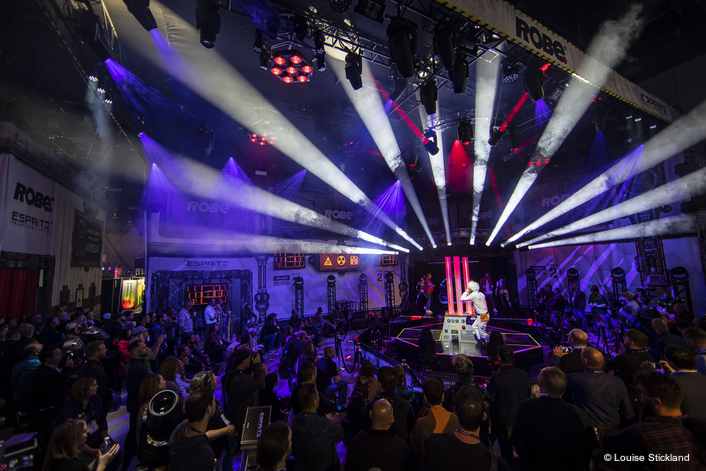 They were joined on the booth by Robe’s CEO Josef Valchar and sales director Harry von den Stemmen.
Lorienn Cochenour co-CEO of Robe North America commented, “There was a great atmosphere on the booth and I was impressed with the amount of people we saw and the quality of the visitors. I thought the booth layout and the different areas meant we could ensure that people would receive exactly the levels of attention they needed.” 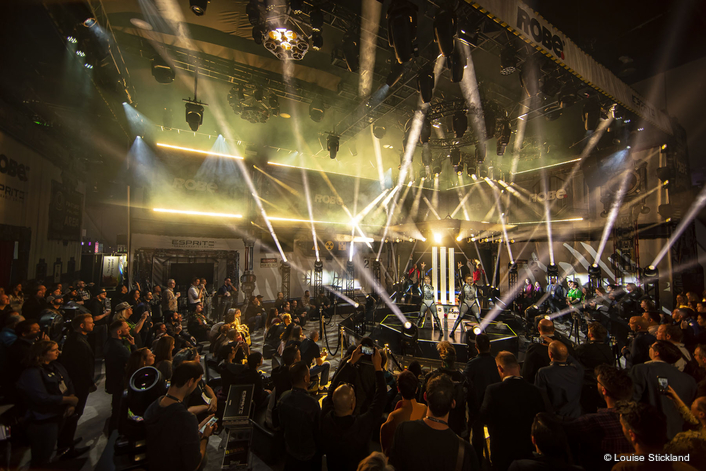 In addition to the main show space, a separate meeting area ajoined and a black box Studio was set up for silent lightshows / product demonstrations (delivered via wireless headsets), with two further hands on demonstration areas – private and public.
The overall booth design was based on providing a complete environment where guests could see the products in action, then had a choice for how to get more detailed demos and information as required.

Robe noticed a marked increase in international makeup this year, a lot of visitors from Europe, Asia and the Pan Pacific regions which included several of their key distributors.
Many lighting and visuals designers, directors and programmers made their presence felt, as well as creatives, production managers technicians, rental company managers employees, venue operators and people with percent this year reflecting a diverse visitor base.

“As always LDI was fantastic for us,” commented Josef. “It was great to be here supporting our North American operation and enjoying the positive vibes and energy of the show, and the T1 series winning a PLSN Award for 'Best Series’ of moving lights was a great honor.”
Harry added, “Right from kick off, the expo was fantastic. My schedule was already full, everyone turned up and I also met so many others I knew in the aisles and around the booth. The Best LDI for a long time I reckon and great for business!” 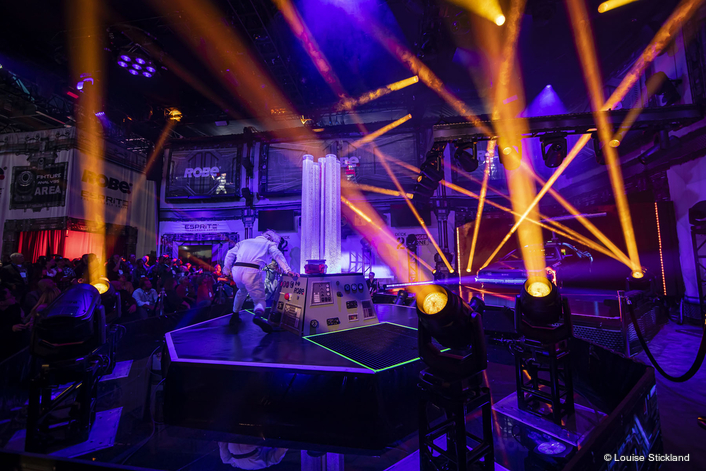 The “Return to The Future” show was produced by Robe’s creative team led by Nathan Wan and Andy Webb working closely with the international exhibition crew and crew from Robe North America.
The ever-relevant concept of time travel was another huge hit with the public as it had been in PLASA London two months earlier when the trilogy was launched.

The car – produced in the early 1980s featuring a Giorgetto Giugiaro classic DMC design, complete with signature gull-wing doors, brushed stainless steel outer body panels, fiberglass body structure and steel backbone chassis, all revolutionary in its day – generated plenty of conversations and comments.
“We wanted to highlight the importance of the ESPRITE‘s replaceable / transferable engine, and coming to Las Vegas – renowned for flamboyant and incredibly visual shows – the pressure was on to impress with our own production,” said Nathan.

In addition to this, the different lights all played specific parts in the show story and the corresponding fixtures were selected to perform defined functions.
The narrative loosely followed the second film in the Back To The Future series, where Marty McFly, having zipped back in time, must try and avoid their future selves! In part one the Delorean could only be powered by plutonium, but now it runs on recycled waste ... paralleling the renewable light source of the ESPRITE. 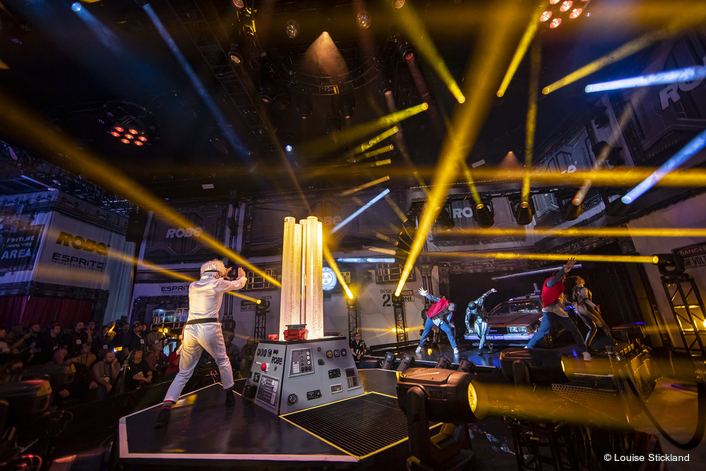 The double-decker booth was ensconced with strategic brand placements to capitalise on the thousands of smartphone and videographers who recorded and posted the show over the three days of the expo always has a ‘Robe’ in their shots and the stunning lightshow and real performers hit a note with many visitors, with the heroes of the action being the Robe fixtures.

Four of the dancers started off in three top-tier gauze windows revealed to the audience drawing their attention to the ‘automotive laboratory as the future Marty McFly and Doc Brown are onstage below scheming over how to transfer the car engine into something more modern, powerful and carbon-conscious!
For the animated finale, all the cast hit the main stage and B stage as the soundttrack – slightly re-worked from the London show – reached a crescendo.

A collage of classic theatrical and rock ‘n’ roll lighting techniques were used to illustrate the power and finessing capabilities of all the fixtures involved in the show as the story unfolded to a pumping specially compiled soundtrack combining musical genres relevant to the storyboard and Robe’s diverse end-user base.
The custom-built laboratory reactor prop, built for the first part of the trilogy revealed at PLASA in London was shipped to Las Vegas for the show including its glorious retro 1980s button / meter panel displays and bubble tube plutonium rods! 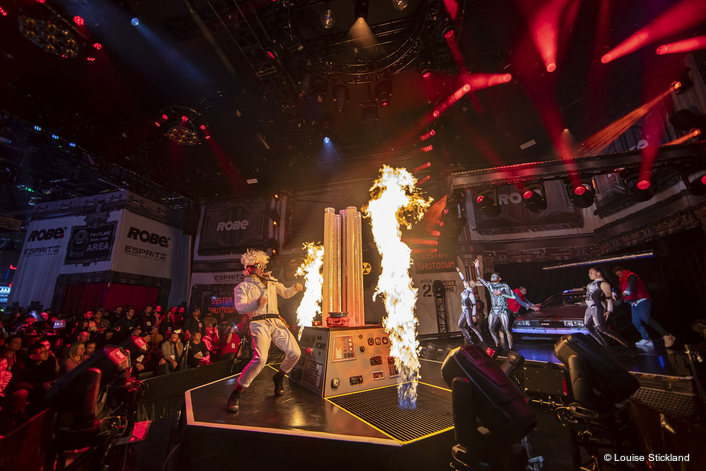 Five hundred and twelve lighting cues were programmed on an Avolites Arena console and run to timecode from the soundtrack, utilizing 24 DMX universes. An ArKaos Stage Server was used to run video content to the screens around the booth and to map pixels in the Tetra2s, Spiiders, Tarrantulas and mapped video on the reactor.

The show floor layout and podium seating were an integral part of the overall design, giving everyone watching clear sightlines wherever they were watching. The live show was alternated with a VOG (Voice of God) product presentation which also received excellent audiences.
There was huge interest in all the new products, especially the ESPRITE which is an ideal replacement for fleets of workhorse discharge fixtures and the Tetra2 which is excellent for light curtains, foot lights and up / down washing.

Winning the two awards, one presented by PLSN magazine for the T1 series and the ‘Best Creative Use of Light’ as chosen by the LDI organizers … was the icing on the cake for Robe.

A good start to the “Year of the Goat” for Robert Juliat and Pacific Lighting (HK) Ltd
A Little Night Music for Robe at RADA
A Pointless Achievement For Robe LEDWash 600s!