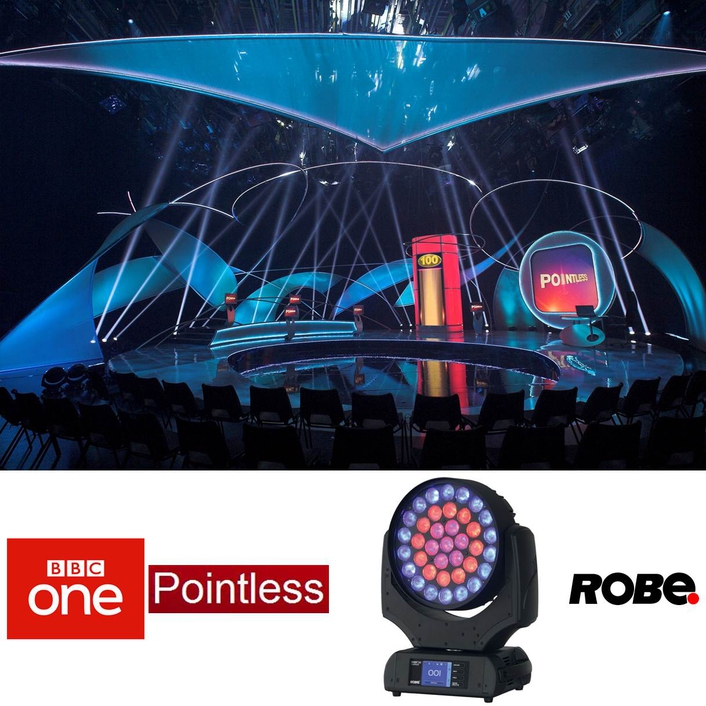 The LEDWashes were operated on Pointless by Andy Dobbs, together with other moving lights, using a Compulite Vector console
Robe LEDWash 600 moving lights were used by lighting designer Tom Kinane to highlight the set of the latest series of the BBC’s popular quiz show “Pointless”, recorded in Studio 8 of the BBC TV Centre in west London, UK.

The 22 LEDWashes –  supplied by Kent based rental company Automated – were all located on the floor at the back of the set, and illuminated an eye-catching collection of flown fabric sails, which were an integral part of Dominic Tolfts’ set design. They shaped and defined the overall space in which the action took place.

This consisted of four teams of two people striving to score the least points to win a daily cash prize!

Kinane switched to using Robe’s ROBIN 600 LEDWash future for this show mid-way through the last series. The results were exactly what he wanted, so he stayed with the same winning formula for this one, which saw three episodes a day recorded for four days of the week.

A crucial factor in Kinane’s choice of LEDWash 600 was that the LED lightsource was flicker-free for the cameras. He is also very happy with the “punch” and coverage of the fixtures, which he first used early in 2011 on a lottery wrap-around show.

He comments, “The wash is very efficient as you’d expect, and I also like the pretty effects that can be created with the individual LED rings – great for when the lights are in shot”.

He also likes the general versatility, and the fact that you can zoom in from a wide flood to make a near-spot effect. “They are definitely the best moving light that Robe has produced to date,” he states.

The lighting aesthetic for Pointless is subtle and complimentary to the game, rather than lots of whizz-banging moving lights zipping around or pulsating LEDs in the face. However this straightforward, ‘no frills’ look actually requires great precision in its creation.

From a rental perspective, Automated’s James Ashdown is very pleased with his investment in LEDWash 600s which were purchased last year and have been in use constantly ever since.

He explains that he wanted some new moving head wash lights, and as LED is the way everything is currently going, Robe’s fastest selling ever product seemed to be unique amidst an ocean of choices! As with most people, he was impressed with the intensity and quality of the light output – and the excellent back-up and support from Robe UK.

The LEDWashes were operated on Pointless by Andy Dobbs, together with other moving lights, using  a Compulite Vector console. Simon Braddock was the generic / white light console operator, the lighting technicians were Daniel Kinane and gaffer Richard Jarvis who worked closely with the BBC’s gaffer, Gary Bryant. The show’s executive producers are Tom Blakeson and David Flynn (who also devised the game) for Endemol.

Other Automated projects on which the LEDWashes have featured include various National Lottery shows and the National Lottery Awards, a one-off with lighting designed by Chris Kempton recorded at The London Studios.

Kinane also used them on the latest TV series of “Just A minute”, the classic Radio 4 comedy panel show which was recorded in BBC TC3.

They are earmarked for the next series of Pointless which will start in the summer, and Automated has also found its LEDWash 600s very handy as a cross-rental item.